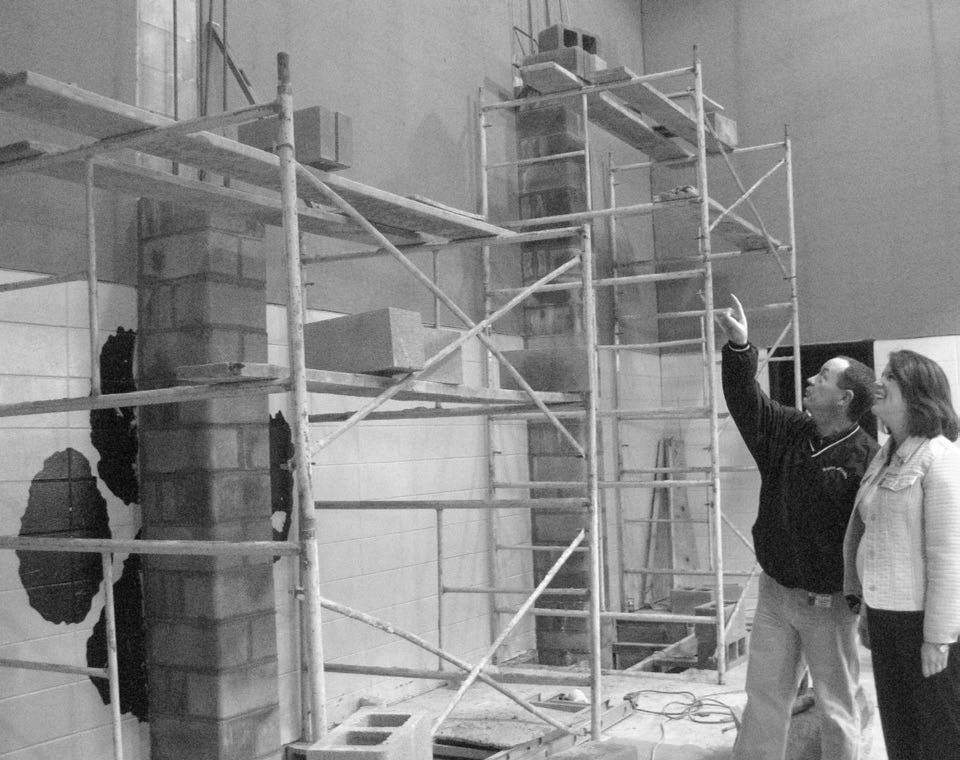 Extensive renovation of the Hayden Middle School gym/auditorium includes shoring up the high end wall of the building. Over the years, the wall had developed a tendency to flex somewhat during windy periods. An engineering firm recommended adding three concrete columns at the back of the stage, two shown in the photo, anchored to the foundation and extending to the roofline, with supporting structural steel beams tying the columns together. Principal Ken Parker and assistant principal Shannon Lakey inspect the work in progress.

When it’s complete, the school – and the community – will have a reconditioned gym and auditorium that can be used for a variety of events from theatrical productions to lectures, concerts, fundraisers, student assemblies, community forums, rec-league sports, PTO meetings, and other school, civic, and recreational events, according to Hayden Middle School principal Ken Parker.

“Once you have a facility like this, you’ll find more uses for it than you ever could have imagined,” Parker said.

All told, it’s a nearly $75,000 project – including over $40,000 in improvements already completed, plus a recent $15,000 grant from the West Blount Community Foundation, plus other in-kind work provided by the county board of education and the middle school itself, he said.

The building is set up in a classic format favored by school designers from decades past with a gym floor flanked by bleachers on each side and a raised stage of some 1000 to 1200 square feet at one end of the gym with accompanying areas backstage for dressing, storage, and access.

Basically, the project involves alterations and upgrades to the stage and stage furnishings, along with expanded seating capacity in the gymnasium area, and repainting and renovation throughout the building. Already completed are new bleachers for the gym, repainting for the lobby, gym, and stage, renovated bathrooms, new tile in the lobby, and a digital piano – a nice non-renovation extra.

Yet to come, courtesy of a recent grant from the West Blount Community Foundation, are a retractable stage curtain with accompanying backstage curtain called a cyclorama curtain, 200 new folding chairs with racks to store them, theatrical stage lighting including a spotlight, and a cover to protect the gym floor when it is used as a seating surface. Seating capacity will expand from about 300 using the new bleachers to over 500 counting the new folding chairs – not bad for a middle school auditorium.

Final improvements yet to be funded include a hardwood floor for the stage, professional sound system, along with a digital projector and screen with associated cabling and wiring upgrades.

So, when will the new auditorium be ready for action? Well, it better be ready by Feb. 21, Parker said, because on that date, It’s Showtime! “On that Saturday, there are not one but two beauty pageants scheduled for the auditorium, one in the afternoon and one in the evening: the Miss Hayden Middle School Pageant and the Little Miss Hayden Elementary School Pageant,” Parker said.

Parker said not all the renovation work will be complete then, but that enough of it will be ready to serve the two events scheduled.

He said that when the building is completed it will be made available to bona fide community groups at a reasonable rental cost, plus a refundable deposit if it is returned to its original condition by the renting group or agency.

In a paper describing the objectives of the project, planners stated: “The greatest limiting factor for the performing arts in our community is the lack of appropriate facilities to host public performances and productions. The primary objective of this project is to address that shortcoming.”

Specific objectives were to:

•stimulate increased interest in the arts among students and citizens of the area.

•increase participation in the performing arts among students and citizens in the area.

•increase the number of students who receive scholarships in the arts.

The gym/auditorium project expands and complements the outstanding restoration of the old Hayden High School to reincarnate it as today’s Hayden Middle School. Parker said the school’s current enrollment is 580.