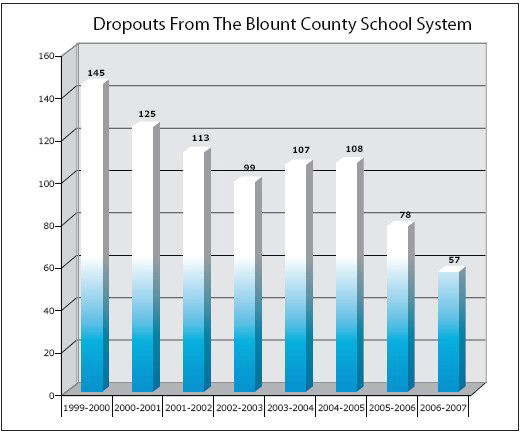 Why be concerned about high school dropouts?

The answer, in a nutshell:

•80 percent of inmates in prison are high school dropouts.

•dropouts are 72 percent more likely to be unemployed than high school graduates.

•dropouts earn $260,000 less in their lifetimes than high school graduates.

•dropouts are much more likely to be on welfare, and to be involved with drugs, domestic violence, law enforcement and the courts; they create an increasing burden on community resources that could be devoted to achieving more positive human and community goals.

•death rate is 2.5 times higher for dropouts than for graduates. 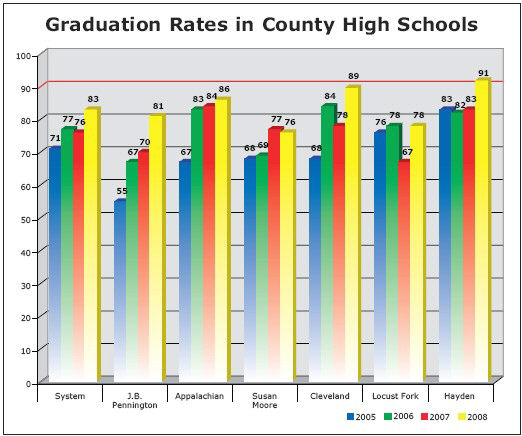 Located at the Career Technical Center, Puckett addresses the dropout problem by identifying at-risk students and by working in tandem with guidance counselors and other teachers throughout the system to meet those students’ needs. The career academy program at the Career Technical Center, with its computer-assisted, self-paced learning approach to academics, combined with vocational offerings, has made a major impact on improving graduation rates by rescuing students who might have otherwise dropped out of the system.

Working with students at risk of dropping out in the high schools themselves involves a variety of activities such as tutoring, increasing those students’ contact with teachers and counselors, getting them involved in activities that interest them, even reaching out to parents to raise their level of involvement.

“Some parents, even some who support their children in earlier years, wean themselves away from that as their kids approach high school. Kids still need that support, and in fact may need it even more. Kids have a tendency to get stuck around the ninth grade. We really try to make a concerted effort to identify them and help them get prepared to graduate,” Beavers said.

Key to remedy is identifying those at risk

Beavers said the best predictor of kids at risk of dropping out is whether they’ve been held back a year at earlier grade levels. If they repeat a grade, they are 50 percent more likely to drop out than the population that doesn’t repeat a grade, he said. Another warning sign is excessive absences.

“Poor attendance, kids not wanting to go to school, not caring about passing, kids who don’t have future plans, kids who are uninterested…that’s the profile of those who are at risk to drop out,” Beavers said. Beavers added that a number of home and community factors that the schools have little or no control over contribute to kids dropping out.

•language spoken in the home;

Beavers said the emphasis on improving graduation rates will get a further boost on April 28 with a special statewide video conference on the subject. The Blount County conference time and location will be 3 p.m. at the Career Tech Center in Cleveland. Key political and community leaders from around the county are invited to the conference. The purpose is to develop a community wide action plan to increase graduation throughout the county.

“This is a community-wide problem. It affects the whole community, and community problem-solving is needed to address it. We have a limited amount of seating space in our meeting location, but if there are people who are really interested in participating who have not been invited, please contact me at the Blount County Board of Education,” Beavers said.

As a part of the emphasis on graduation, Beavers said, he wants to work with local businesses to recognize graduating seniors during June and July. He would like for a range of businesses to provide souvenirs, advertising premium items, and free or discounted goods and services to seniors who graduate this year.

The Birmingham News reported last week that Alabama’s graduation rate state-wide, while improving faster than most states, still remains among the lowest nationwide, at 44th out of 50. According to the national formula, Alabama’s overall graduation rate is 66.2 percent for the 2005-06 school year. The state’s own calculations place the number at 82 percent for the same year. Six of the lowest 10 states nationally were Alabama’s neighbors in the Southeast. States are moving toward a uniform method of calculating graduation rates, but Alabama has not implemented it yet. Number of students who drop out shows 61 percent reduction since 2000, with a steep decline since 2004-05. Data provided by Blount County Board of Education This chart showing graduation rates for county high schools reflects steady, systemwide improvement of 12 percentage points over the last four years. Hayden High School this year exceeded the state graduation target of 91 percent for the first time. It was the first county high school to do so. Cleveland is knocking at the door with 89 percent. J.B. Pennington shows impressive improvement totaling 26 percentage points over the four-year period. While the overall picture is positive, problem areas remain. Data provided by Blount County Board of Education