How to succeed in business by really, really trying 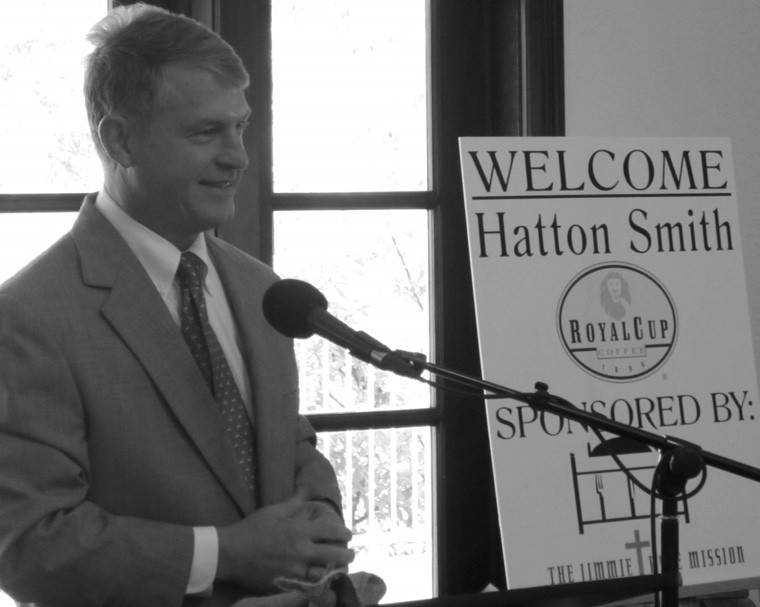 Hatton Smith of Royal Cup discusses ‘Building a Brand,’ in what was called ‘the perfect program for a chamber breakfast.’

That wasn’t the title of Hatton Smith’s morning wake-up talk at the chamber of commerce breakfast last week, but it could have been – should have been. That was how it felt.

Smith is president and chief executive officer of Royal Cup Coffee, headquartered in Birmingham. His talk was actually entitled “Building a Brand” and dealt with the history of Royal Cup and the company’s efforts to become the country’s leading supplier of premium roast coffee and tea.

Smith’s older brother was a graduate of Harvard Business School. He himself attended a much less distinguished school ( Washington and Lee University, not exactly a nonentity itself), and was still wondering whether he’d scrape through withaCongraduationday.(Hedid.)

When he came home, his mother made his older brother hire him in the family business, then known as Dine-mor. Soon he was promoted (he didn’t say exactly how that happened) to the top spot.

The early days of his time at the helm were notably downhill. Among his early “accomplishments,” he said, was to lose the company’s three biggest accounts – including McDonald’s Restaurants.

A turnaround was needed and a turnaround is what occurred, beginning with a clear vision of what the family wanted the company to become – the leading supplier in the country of high quality coffee and tea products, and the best provider of quality customer service: in a phrase, “the best value in the marketplace.” The company, which had $299,000,00 in sales in 2010, he said, has set a goal of $500,000,000 by 2019.

As a result of its focus on those objectives, Smith said, Royal Cup is now a national brand with more distinctive route trucks than any other coffee company in the country. Its strategy has been to target initially the “away-from-home” market – people who are staying at quality resorts and lodging chains – both full-service and selective service – across the nation. The list of Royal Cup customers reads like a who’s who in high-end lodging: The Greenbrier, Callaway Gardens, the Broadmoor, The Ritz-Carlton, Hilton Worldwide, The Peabody, Holiday Inn, and many more.

Smith said the company emphasizes four elements in its marketing effort: sensational service, focus on customer needs, drive to provide solutions to those needs, in a context of deep relationships.

If his personality is indicative of Royal Cup’s approach to sales, he might have added a boundless enthusiasm, high energy, candor mixed with witty – sometimes even goofy – good humor, and a laser focus on working the marketing strategy.

As chamber executive director Donny Ray observed, it was a practically perfect program for a business audience to hear – an inspirational message about how companies can succeed in trying times by taking care of business, treating employees like family, creating and executing a well-thought-out marketing strategy, and really, really trying.