How to squirrel proof deer feeders 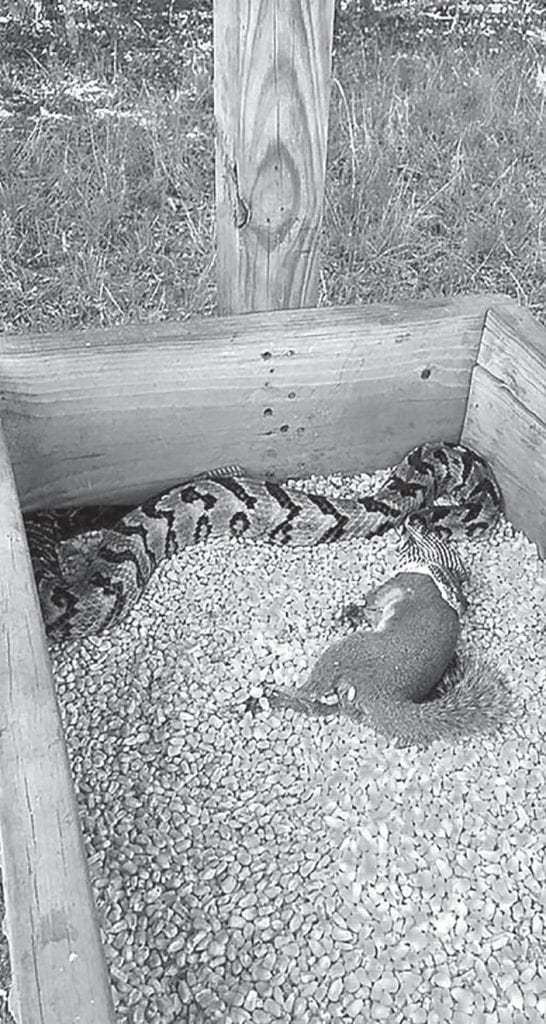 Corn is a universal grain and we are blessed to be able to grow, enjoy, and utilize this wonderful plant. Everything likes corn: deer, mice, squirrels, raccoons, and a host of predators that feed on these critters, including fox, bobcat, coyotes, maybe even a weasel or two. When you put corn out as a food source for any animal, you’re going to get a large number of animals you probably would just as soon not show up.

One way to prevent squirrels from toting your corn off is to put a rattlesnake in the feeder. (See photo) I’m not sure who came up with this idea, but I’m out! Actually the snake was attracted to the feeder by the mammals that were feeding there, including the mice, squirrels and other rodents, just as the fox and bobcat would be.

I have had an encounter with a rattlesnake a time or two and have always given them a wide berth because I know they pose a threat; however, they play an important role in controlling rodents in our environment. Can you ever remember someone dying from a rattlesnake bite? You have a better chance of being hit by lightning than dying from a snakebite, according to the Florida Department of Conservation and Natural Resources. How about one in 50 million?

Have I reduced your fear of being bitten by a poisonous snake? Probably not. There is just something about humans; we have a hard time dealing when we think about being eaten by a wild animal. Sharks, bears, lions, snakes – we just don’t like to think about something higher than us on the food chain.

If you are bitten by a poisonous snake, just get to the emergency room ASAP. If you decide not to be treated, then the statistics change a bit. A woman called this week and we were discussing snakes. When asked if she knew how to tell if a snake was poisonous, she mentioned that the shape of the head was a good indicator. It is. I told her that if the snake had a round pupil in the eye that it was a non-poisonous snake. I think she is going to go with the head shape recommendation, as most folks would.

So how do you get rid of snakes? First, get rid of any debris that provides shelter. This includes wood piles, tall grass areas, fallen trees, etc. This type of habitat provides shelter for snake food such as ground squirrels and other rodents. Do not leave dog food or any other type of purchased food or grain where rodents can utilize it. Once again, rodents equal snakes. You get the picture here; get rid of the food source; get rid of the snakes.

Corn as deer feed may not be the best idea that us hunters have ever come up with anyway. While it will fill deer up, it is not very nutritious. If you are more concerned about herd health, plant a food plot of winter forages, such as wheat, oats, ryegrass and clover, or a mixture of these.

If you want to supplemental feed, soybeans or a deer ration of some type would be a better choice, but more expensive. Does corn really pull in the big bucks? Only at the store. If you are supplemental feeding with corn, and putting hunting pressure on the animals, they quickly adapt and avoid those areas where they don’t feel comfortable. I have hunted over corn in another state, where it was legal, and all I saw was a good variety of birds and a few squirrels. The deer had figured the situation out, even the young bucks and does.

Also, when you supplemental feed, you concentrate the animals. If one is sick, the chances of spreading the disease to others in the area increases, much like humans and flu season. You are most likely to catch the flu any place people come together, like school, church, and the grocery store, especially one with a pharmacy in it. With Chronic Wasting Disease (CWD) now reported in Mississippi, it’s even more important that hunters and sportsmen do everything possible to prevent this disease from entering our deer herd in Alabama. You may want to reconsider concentrating deer at supplemental feeders.

As a young boy I remember getting excited just seeing a deer track. There were very few deer in North Alabama. I remember the first release into Guntersville State Park in the 1960s. The population has recovered and has produced opportunities for most folks to enjoy hunting a big game animal. However, if we are not diligent and work to keep CWD out of our state and manage the deer population in a proper manner, some boy 30 years from now may get excited about just seeing a deer track. Think it can’t happen? When is the last time you saw a passenger pigeon?