How is the city organized? 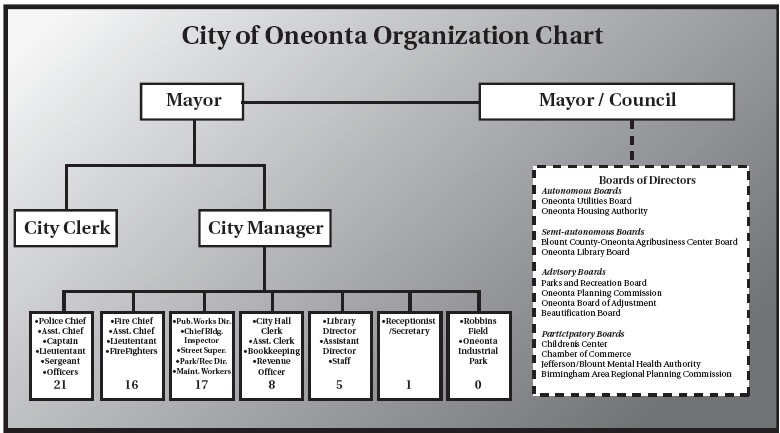 To follow up on last week’s article on how Blount County government is organized, The Blount Countian this week highlights the City of Oneonta, the county seat and the county’s largest municipality.

The accompanying organization chart (page A3) shows the city’s major departments. The functions performed and services provided by the police and fire departments and the library are well known and are not further elaborated here. Within each organizational box are shown the titles of supervisory employees, followed by the number of full-time employees.

The functions of two departments – public works and the city hall staff – are perhaps less well understood, so explanations are provided for them.

What’s labeled Robbins Airfield/ Oneonta Industrial Park is not a department as such. No city employees are assigned exclusively to their management. However, both entities represent activities in which the city has a major proprietary interest, and require significant financial resources, planning time, and managerial attention. Public Works Department

At present, Oneonta has about 70 full-time employees. Add part-time employees and the number expands to as many as 130 in the summer when seasonal workers, many of them students, are hired by the Parks and Recreation Department. Based on full-time employees, that makes Oneonta the 14th-largest employer in the county. In the summertime, with its full complement of part-time and seasonal workers on the job, the city would rank ninth among the county’s largest employers.

The city expenditure budget for 2011 is $6,857,000. Three departments – police, fire, and streets – account for slightly over half of those expenditures.

The other significant expenditure category is general government, which includes salaries for city hall employees and elected officials, insurance, debt payments, budgeted capital expenditures, and miscellaneous items. Those four categories account for over 70 percent of the city budget.

Sales taxes are the single biggest source of city revenues, constituting about 53 percent of the total. The remainder come from other tax sources including gasoline, ad valorem, motor vehicle, tobacco, and lodging taxes.

“If there’s one thing we at the city would like to stress in this article,” said city manager Ed Lowe, “it’s that our job as city employees is to provide services to citizens. We do that through the city departments, and each department specializes in the type services it provides.” Appointments to boards

In addition to the organizational elements shown on the chart, the city exercises indirect influence over a number of quasi-governmental entities through its authority to appoint citizen members to governing bodies. Not all, but some of these boards are identified in a box of their own on the chart. They are categorized into four types, based on the extent of city participation in their missions, funding, and management:

autonomous boards, e.g. Oneonta Utilities Board, over which the city exercises no funding and little direct control other than through its appointment authority,

semi-autonomous boards, e.g. the Oneonta Public Library Board, where the city provides significant funding and at least routine oversight.

advisory boards, e.g. the Park and Recreation Board, created to carry out a specific municipal function.

participatory boards, e.g. the Jefferson/Blount/St. Clair Mental Health Board, where the city provides little or no funding other than annual dues or fees and is only one of several agencies who make appointments to the board.