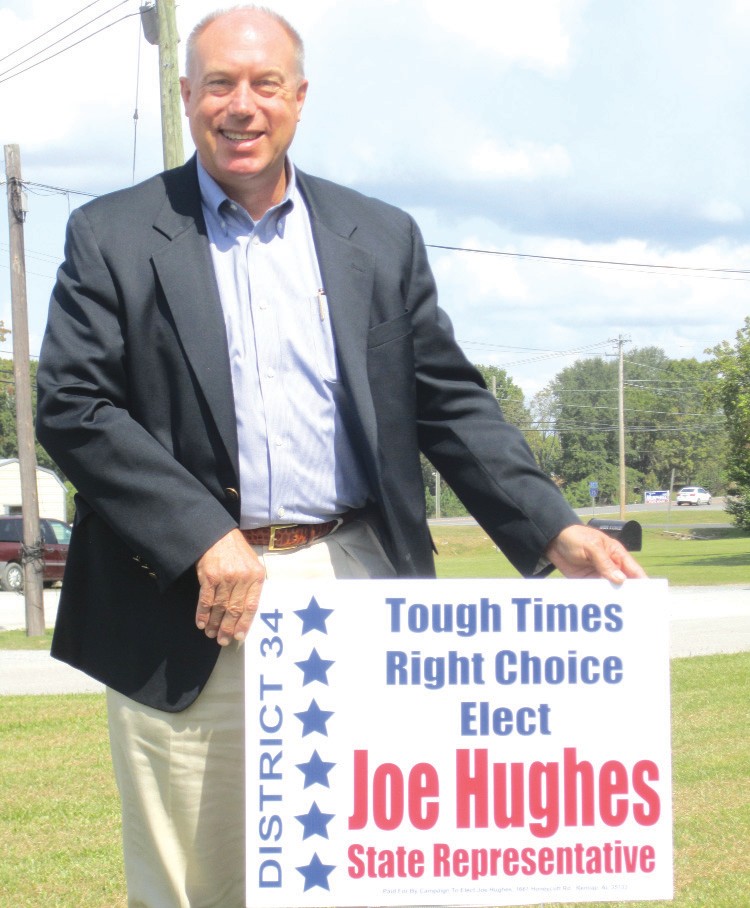 What makes Joe Hughes run? “I just felt there is a need for somebody to pick up the baton and keep Blount County moving in a positive and forward-thinking way. I can bring Blount County’s voice to the table.”

Born and raised: Born in Jefferson County, moved to Montgomery at age of 8. Began working on asphalt paving crew summers and holidays at age 15; worked most of his life in road construction, transferring to Locust Fork in Blount County in 2004. 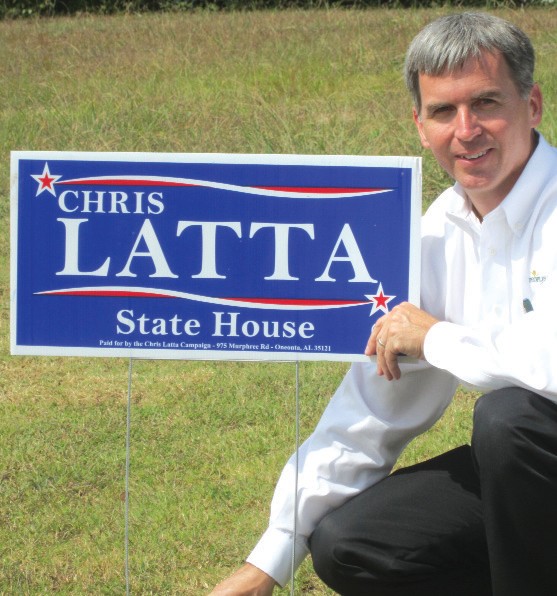 When Latta told his family he would be running for office and they would be helping him, his youngest daughter Sophie asked (since they would be “running,”):“Daddy, will people be chasing us?” Once she understood the concept and the need for money, like any good supporter, she volunteered her piggy bank.

Concentrated in various jobs and positions in road construction/asphalt paving industry since age 15. After college, worked for construction company that moved him to jobs in various parts of the state including Birmingham and Huntsville. Employed since 2003 by APAC Midsouth, Inc., a road materials and road construction contractor, as a sales representative with a territory encompassing the half of Alabama north of Childersburg. Experience includes working as laborer and equipment operator, and in project design, budgeting, estimating, heavy construction, sales, and project management. Previous public elective office(s)

Mayor of Locust Fork since 2008. Re-elected unopposed this year. Will resign if elected to state representative position. Running for office because

“When I heard Elwyn Thomas was retiring, I felt like there was a need for somebody to take the baton and keep Blount County moving in a positive and forwardthinking way. Both as mayor and in my professional job, I have the opportunity to work with a lot of different kinds of folks, and you have to learn to communicate well with all of them. I felt with my background of dealing with diverse groups, I can bring Blount County’s voice to the table.” Organizations, leadership positions, awards

•Past board member, Associated Builders and Contractors, Alabama chapter.

•Business development. Will promote district at every opportunity to try to bring business to county so people don’t have to commute to another county to work and can spend more time with their families. Also will support small businesses; would like to explore developing a program where incentives are given to existing businesses in return for job creation, as well as supporting low-interest loans to encourage small business growth and expansion. Promote the county more as a destination for business. Invite prospects to come see what we’ve got – recruiting groups, state development groups, prospects themselves. Get more boots on the ground. Must gamble a little – spend some money on a first-class office park. We can be proactive, or we can stand on the sidelines while other counties do it.

•Education. Most teachers do a wonderful job. Many have to use their own money for school and classroom supplies. Their list of needed supplies is longer than the syllabus for the class. That’s just wrong.

•Infrastructure. A major concern. The county road program as a whole should be re-thought, with a view toward re-paving with more durable surfaces like asphalt. Four-laning of Ala 79 and especially U.S. 278 needs to be addressed. The amount of heavy truck traffic moving east and west on 278 is incredible. Until it’s four-laned, something should be done – like adding passing lanes – to eliminate the bottlenecks. Would love to be the squeaking wheel for these needs. Stand on specific issues

Position: Personally in favor, but it’s an individual decision. Aware as mayor, of how much revenue that could benefit Blount is going to adjoining counties, while we still have the negatives associated with liquor sales, like beer bottles and other litter. We’re wet for all practical purposes, we just don’t get the tax revenues to go with it. It’s also a business development issue. There have been opportunities for industries and restaurants that would have considered locating here, but when they found out the county was dry, they went elsewhere. Experience of Cullman suggests a lot more positives than negatives – big increase in county revenues and no increase in disorders. Could be done sensibly – no biker bars, night clubs, or anything detrimental would be allowed.

Position: Hughes said he voted for it. Just the thought of releasing prisoners, laying off state troopers, cutting back Medicaid – seemed unacceptable. When the rainy day fund was first set up, the kind of economic times we’re in now was exactly what it was set up to help manage. Money should be paid back, and Hughes would work to make sure it is.

Position: In favor of the idea that local governments should deal with their own local issues, not hand them off to the Legislature. Citizens shouldn’t be asked to vote on issues they know nothing about affecting other counties. Of Alabama’s 800 amendments, 70 percent deal with local city and county issues. That fact speaks for itself.

Position: In favor in some circumstances. Something needs to be done to challenge both teachers and students. We should never settle for second best. Charter schools may have role to play in some combination with traditional public schools – make them work harder, try new ideas.

Issue: Are Blount County schools in need of improvement?

Position: See his platform under business development. Also favors programs like beautification of downtown Oneonta to attract more traffic into area. Thinks special downtown renewal effort should be made to fill empty storefronts with viable retail businesses to attract and retain shoppers who do come downtown.

Issue: What should be done about undue influence on public policy by lobbyists for major political interest groups?

Position: Paraphrasing Hughes: Before a representative goes to Montgomery, he better know who he is and be sure he’s secure in his convictions and integrity, because he’s going to be tested. From Hughes’ “stump speech”: Hughes said he’s not about the money; he has served as mayor of Locust Fork for free, because he’s passionately concerned about his town. “I will take that same passion to Montgomery,” he said.

Position: Nuanced reply. Some parts of the bill are good. Overall, it was rushed to a vote without consideration of unintended consequences. Any legislation that has that many churches up in arms, needs another look. Without immigrant labor, some farmers in Blount County and the construction industry statewide would be crippled. Where would Huntsville be today if it weren’t for immigrants in the 1940s and 1950s from Germany? How embarrassed were we when a visiting Mercedes executive was taken to jail in Tuscaloosa this year just because he didn’t have his passport in the car with him? So, yes, it needs to be looked at. Candidate’s statement to voters.

“If elected, I will serve my district honorably, responsibly, and with integrity. As your representative, I will listen to your concerns, I will be responsive to your needs, and I will make sure your voices are heard in Montgomery. If an idea makes sense for Blount County, I’ll be for it. If it doesn’t make sense, we don’t need to waste time on it. We need to focus on needs of the people and not get caught up with secondary issues. We have much to be proud of in our district. Our blessings are rich and abundant, and my family is grateful to live here. There is always room for improvement, and I will work hard to make things even better. That’s my commitment to you.

Joined Army National Guard in 1990, serving 12 years until 2002. Began banking career at Ashville Savings Bank in Oneonta in 2003, remaining with the bank nine years through its transition first to Colonial Bank, then to BB&T. Began present job in 2009 as market executive at Peoples Bank of Alabama, where he handles commercial and consumer lending for the bank’s three branches in Oneonta, Locust Fork, and Blountsville. Running for office because

Latta: “I have a strong desire to serve the people of District 34 and my fellow citizens. I feel more than ever before the need for strong, conservative leadership in Montgomery.” Organizations, leadership positions, awards

•Latta feels his 20 years in banking, working with small businesses and individuals, puts him in a good position to understand the needs and challenges they face.

•Serving on school board enables him to understand challenges in education, including issues in the classroom and in system finance and management.

•Personally humble and a good listener, able to work well with people, including other legislators on needs in Blount County.

•Education. Advocate for K-12 education. Would work to shift more funding from higher education to K-12.

•Repay Alabama Trust Fund. Supports legislation to require the $437 million authorized by the recent constitutional amendment vote be pad pack, but not required in the language of the amendment. Stand on specific issues

Position: Against it, mainly on moral grounds. Blount County will lose its uniqueness if liquor sale in legalized. Will immediately lose $400,000 in annual county “in lieu-of-taxes” revenue if legalized. Latta believes it will take 7-10 years to re-coup that loss in tax revenues from liquor sales. Doesn’t believe county has the population density to attract chain restaurants or major employers even if county goes wet.

Position: Reluctantly voted for the amendment. It put citizens in no-win situation: don’t pass it and lose jobs, or pass it with no assurance that the Trust Fund will be repaid. Should be repaid within a specified period of time, like any other loan. Would have been easier to vote in favor if repayment requirement had been included in the amendment.

Issue: Are Blount County schools in need of improvement?

Position: Schools will never be perfect, and should always strive to be better, but have made remarkable progress in last 10 years. Test scores are up, graduation rates have increased, and Blount County with its emphasis on technical education is unique in being almost a model for similar trends in other areas of the state.

Position: Economic development is driven by small business. Legislators should work with cities and counties to recruit small businesses in the 10-30 employee range. County should capitalize more on tourism, by developing the Locust Fork River as a destination, for example. In favor of programs like Alabama Small Business Initiative, other programs that would provide seed money for entrepreneurs to start, purchase, expand businesses. Retail development will follow small business growth.

Issue: What should be done about undue influence of public policy by lobbyists for major political interest groups?

Position: Problem is not with lobbyists who promote the needs of their industry. Problem arises when monied interests try to influence legislation by buying the votes of legislators. Legislators must put the public interest above the interest of lobbyists.

Position: With reservations. As originally passed, like many other laws, it had unintended consequences. You should be a citizen of the country to live here, but must recognize that farming communities rely on immigrant workers. “The law could have been simplified so much by saying ‘You must be a legal resident of Alabama to receive state benefits,’” Latta said. Candidate’s statement to voters

“I humbly ask the people of this district for their vote and support. I feel that more than ever before we need true conservative leaders in Montgomery that are not going to bend to pressure on issues that could affect us for generations to come. I believe I have shown that in my personal and professional life and will not lose sight of the ultimate goal. My 20 years of banking experience and eight years serving the Blount County Board of Education has allowed me to work with and understand the needs of individuals and small businesses throughout he district and the challenges they face. I feel I have displayed this leadership and would be grateful to be your voice in Montgomery.”