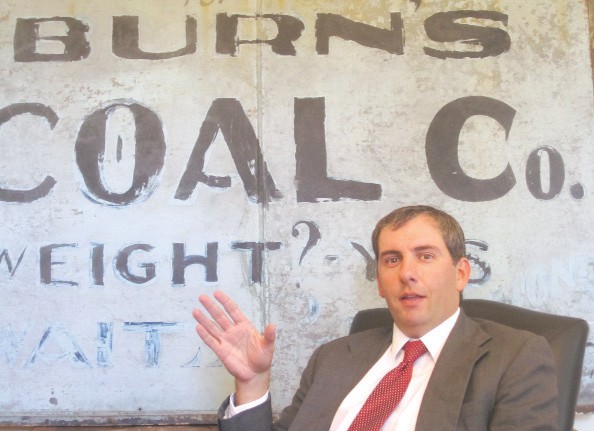 Bill Burns and office memento: a recovered sign for a local company in Lauderdale County once owned by his grandfather.

Born and raised: Born in California, moved to Atlanta at age 8, then to Auburn where he graduated high school in 1991; married Jada Pate of Remlap in 2002, moved to Remlap in 2009. 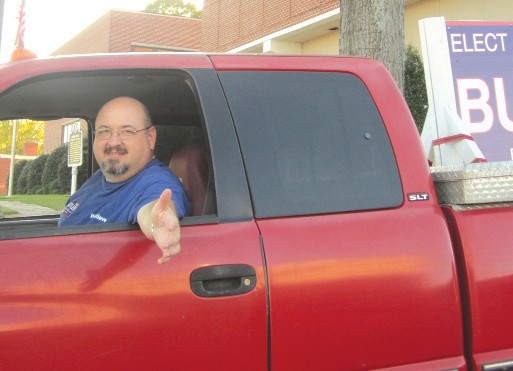 Graduated Auburn University in 1999 with bachelor’s degree in psychology. Graduated Birmingham School of Law in 2006 with juris doctor.

Self-employed since 2009 as an attorney/ political consultant at Burns Legal & Political Affairs, with office currently colocated with attorney Bob Austin in Oneonta. Worked various part-time jobs while attending Auburn University, then employed by Altec Industries in sales, by Summit Document Services as an account manager, and by the American Heart Association (until 2010) as government relations director. Organizations, leadershipship positions, awards

•as a result of working as registered lobbyist for American Heart Association, Burns considers himself well-versed in law and experienced in writing, lobbying for and helping pass legislation, including key bills that impacted nation’s leading killers, heart disease and stroke.

•considers himself a natural leader and good communicator with a tenacious work ethic and excellent personal relationships with Republican leaders in Montgomery that should be beneficial to House District 34.

•Economy. Primary issue is developing the local economy; Blount County is well situated for succesful development and, with careful planning, it can be developed while maintaining its historic charm; includes encouraging job growth by removing roadblocks to small business growth and success.

•Education. With his wife a former teacher, his mother a current teacher in Blount County and two children attending here, maintaining and enhancing funding for education is a top priority; must keep striving to explore creative new solutions and methods to improve student performance and outcomes; likes idea of charter schools to provide a choice where public schools are performing poorly, but does not believe they are the answer for all situations.

–With only one circuit court judge, civil and criminal cases are backing up in the Blount County circuit.

–Citizens are having to wait too long to get a hearing in court – as long as a year in some cases for a contested divorce and other civil matters.

–Burns says this is county’s most urgent problem and one he would address immediately through the Blount County legislative delegation, if elected. Stand on specific issues

Position: Personally against it. Points out it will be decided by referendum before the state representative is elected, unless there is no runoff.

Position: Voted in favor of it, primarily because of the likelihood of job losses – several local – if it failed. Strongly in favor of repaying the amount borrowed to the trust fund. Governor must create long-term solution to prevent need to borrow again.

Position: In favor, so local county governments can address local issues without having to go through the state legislature. Local tax increases should still be subject to public referendum.

Position: In favor generally, but not in all situations. They can raise standards by providing competition, thus raising the bar for performance by public schools, but they are not the whole solution. They should be considered part of the solution.

Issue: Are Blount County school systems in need of improvement?

Position: Blount County schools are performing well generally (most met 2011-12 Average Yearly Progress standards), but this is no time to rest on our laurels. Schools should constantly strive to be better. One area needing improvement is improved physical education for students, critical because childhood obesity threatens the health and well-being of our youth.

Position: Supports Gov. Bentley’s efforts to make the state law setting starting and ending dates discretionary with each school district so they can respond to local circumstances.

Position: State representative should work hard with state leadership and vigorously sell Blount County for any and all new industrial opportunities. Also, tax breaks for small businesses will remove impediments to local growth and hiring.

Issue: What should be done about undue influence on public policy by lobbyists for major interest groups?

Position: As a registered lobbyist for a non-profit, Burns says he observed corruption by big lobbying interests first hand. The ethics reform bill that was passed by the Legislature was long overdue. He has been and will continue to be outspoken against corruption by lobbyists.

Issue: Do you support Alabama’s immigration law in whole or in part?

Position: Supports the law and is glad the federal court upheld parts of it. Understands opponents’ objections based on equal protection under the law, but thinks something still must be done about illegal immigrants. There is a correct way to become a citizen and those wishing to live here should all be held to the same standards for becoming a citizen. Candidate’s statement to voters:

“I hope voters of House District 34 noticed a recent trend regarding political signs in this campaign. It was the runof the-mill career politicians that got their signs out first because they had stacks of them in the garage from previous failed campaigns. It’s time to break the cycle of the good-old-boy network and send someone to Montgomery that will work for you. While this is my first run at public office, nobody in this race offers you more legislative experience or knowledge of the law than I do. With a half a term left to serve, this is no time for learning on the job. I appreciate your consideration, and I promise I will not embarrass you or walk out on the job when the chips are down.”

•Bought and paid for farm three times over as a result of rebuilding and retooling needs. Excellent discipline for paying bills, planning budget, getting the most out of scarce resources, refusing to waste money.

•Not easily influenced. Wants things in writing, so there’s a paper trail. Days of “handshake” deals and agreements has passed.

•Important decisions must be weighed deliberately. Would not surrender his vote on an issue until he understands it fully, along with all its past history and future implications. Political platform (key issues)

•Against legalizing liquor sales. Strongly opposed to legalization. “Our teens are under enough pressures as it is,” Butler says. “Allowing liquor to be put on display and sold at stores amounts to tacit approval of drinking. They can tell themselves ‘Well, they wouldn’t allow it to be sold if it wasn‘t OK.’”

•Economy. “It’s jobs. That’s number one. I’ve got a son with a degree, and he’s looking for a job. They’re just not available around here without being willing to move away.” Butler would work to see interest rates on small business loans lowered by at least a percentage point to encourage small business expansion and hiring. He would also support other small business initiatives as a top priority.

•Education. In favor of increasing funding for education. Notes as an example of improvements to be made that county system athletic programs do not cover the wide range of opportunities available in the city system. Stand on specific issues

Position: Strongly against. Butler says it sends the wrong message to youth who may think that display and sale of liquor would condone its use in their eyes. Young people have enough problems to cope with without adding this potentially lethal one.

Position: Voted against it. Butler said it was a tough call for him to make to vote aganst it. If the language on the ballot had contained a requirement to repay the loan within a reasonable period, he would have voted for it. Without that language to compel compliance, he doubts the loan will be repaid, and the Alabama Trust Fund could become subject to further such raids on the corpus.

Position: Undecided. “I don’t have enough information on that,” Butler said. “I know it refers to the Legislature passing a bill on things having to do with governing the county and putting it on the ballot for a statewide vote. That makes no sense, so why was it set up that way in the first place? There must have been a reason. I need to do some more homework on that before I take a position on it.”

Position: Against. Butler feels charter schools would weaken the regular public school system, and for that reason doesn’t support them.

Issue: Are Blount County school systems in need of improvement?

Position: Yes, but mainly because there’s always room for improvement. Believes the county has good schools, generally, but feels there are efficiencies that are not taken advantage of. Why spend excessively on different architectural designs for different school buildings, for example? Why not standardize school building design and save money on architect’s fees?

Position: Not a major problem. “We have a lot more serious problems we need to solve before we get to that one,” Butler says. “The local school board would have to make a strong case to me for returning local control to them; otherwise leave it as it is.”

Issue: What should be done about undue influence on public policy by lobbyists for major interest groups?

Position: Has no personal experience with this issue on which to base a position. Repeats his earlier pledge to do his best not to be unduly influenced by lobbying interests. Lobbyists, would not like him, he says, because he wouldn’t like them.

Issue: Do you support Alabama’s immigration law, in whole or in part?

Position: In part. Sees both sides of controversy. “I don’t know if it should have been done that drastically and that quick,” Butler says. Paraphrasing: Something should be done to re-coup the money we’ve spent on illegal immigrants. If they’re not in the process of becoming citizens, they shouldn’t be here. Candidate’s statement to voters

“Since announcing my candidacy, I have been asked why people should vote for me. Simply stated, I believe that my life experiences have prepared me to represent your interests. Alabama’s economy is in trouble and public education should be undergoing reform. As owner of a cattle operation, I know firsthand that small business is the foundation of our economy. Also, having been heavily involved with our youth for the past 18 years, I know the quality of education for our children is a top priority. As your representative, I will back legislation that promotes small business and does not cut funding from our children’s education. Most importantly, my only ‘special interests’ will be those of the people in our district.”