Hornets too strong for Tigers 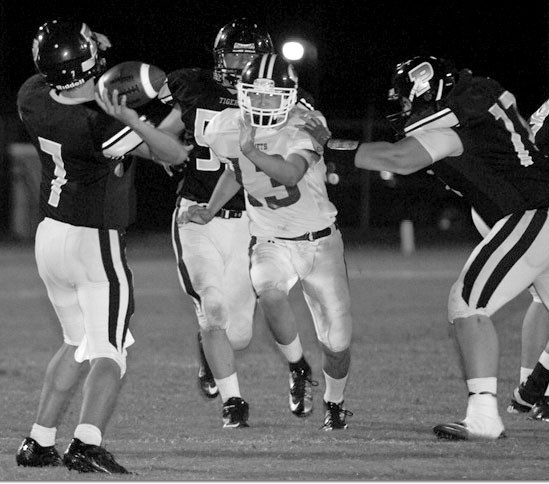 The Locust Fork Hornets outscored the J.B. Pennington Tigers 21-2 down the stretch to pull away for a 48-24 win in Blountsville last Friday night. Each team’s record now stand at 1-4 on the season.

Locust Fork got a big night from senior quarterback Geoffrey Bramblett, who completed 13 of 24 passes for 206 yards with four touchdowns and an interception. He added 146 yards and a pair of touchdowns on 19 carries.

Bramblett had touchdown passes of 10 yards to Taylor Bentley and 18 yards to Clay Smith, in addition to a pair of touchdown runs, in the first half.

Pennington countered with a 12-yard touchdown run by Andrew Kaplan and a 2-yard run by Brandon Butts to trail just 27-15 at the half.

The Tigers got a little closer in the third quarter when Butts found Blake Harris on a 13-yard touchdown pass to cut the lead to 27-22.

Locust Fork answered quickly. Bentley scored on a 3-yard run and Bramblett hit Clay Smith on a 45-yard touchdown pass and the Hornet lead was 41-22 after three quarters.

The Hornets added another score in the fourth quarter when Bramblett hooked up with Todd Goodwin on a 29-yard touchdown pass.

The Tigers got a solid game from Butts, who completed 13 of 26 passes for 186 yards with one touchdown and an interception.

Kaplan caught five passes for 59 yards, Timothy Johnson caught three passes for 80 yards, and Harris had three receptions for 39 yards and a touchdown.

Clay Smith caught six passes for 123 yards and a pair of touchdowns for the Hornets. Bentley caught four balls for 32 yards and a touchdown while Tawbush had three catches for 20 yards. Adam West had two receptions for 48 yards.

Tyler Love led the Tigers with nine tackles while Neely had eight. Jacob Washburn had four tackles and an interception.