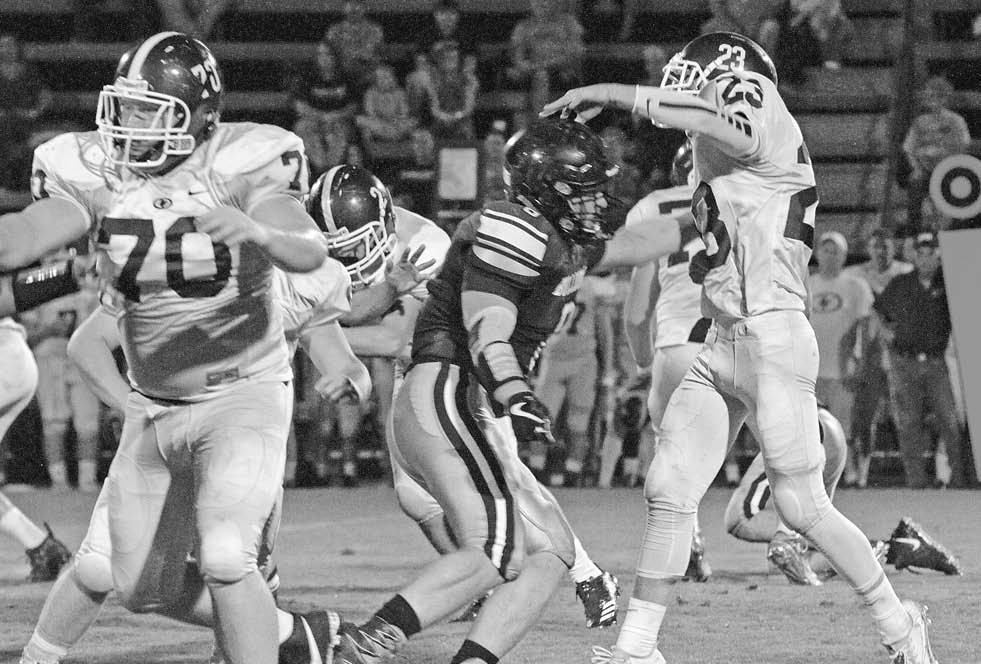 On a night when the two teams combined to rush 88 times and complete four passes, it was a missed extra point in the fourth quarter that proved to be the difference as the visiting Locust Fork Hornets fought their way to a 14-13 victory at Susan Moore.

Locust Fork took an early 7-0 lead on a 33-yard touchdown pass from Charlie Cater to Drew Rogers. Jose Hernandez added the kick and the Hornets led 7-0 with 6:08 to play in the first quarter.

Susan Moore answered early in the second quarter as Ray J. Watson found a seam and raced 45 yards for the score. Anthony Cervantes added the extra point and the game was tied 7-7 with 11:45 to go in the first half.

The Hornets finally regained the lead late in the first half when Hunter Neely broke free and scored from 33 yards out. Hernandez added the kick and the Hornets led 14-7 at the half.

Neither team was able to finish promising drives in the second half until Cervantes scored on a 10-yard run early in the fourth quarter. The extra point was missed, however, and Locust Fork clung to a 14-13 lead with 10:18 to play.

Despite a couple of possessions for each team, the defenses ruled for the remainder of the night and the Hornets held on for the win.

McAvoy completed 2 of 8 passes for 8 yards with an interception.

Jacob Kelly and Gavin Harper led the Bulldog defense with six tackles each while Jeffrey Threatt and Caleb Bailey had five stops each. Threatt also had a fumble recovery.

Rogers led the Hornets with 106 bruising yards on 20 carries. He also had two catches for 56 yards and a score.

Hunter Neely had 87 yards and a touchdown on just five carries while Jarrett Peeples chipped in 33 yards on seven attempts.

Rogers led the Hornet defense with 16 tackles. D.J. Umland had eight tackles while Neely and Brody McCay had six stops each. Peeples had an interception and Sheldon Boyd had the game’s only sack.