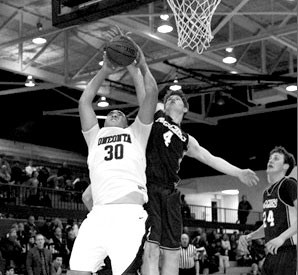 Stedman Bothwell powers his way past the Fairview defense.

The Locust Fork Hornets held off the hosts 58-55 in the first round but couldn’t do the same in the finals of the Corner Christmas Tournament as Mortimer Jordan rallied for a 44-42 victory over the Class 4A No. 10 Hornets.

Blue Devil point guard Mark Louis hit a pair of free throws with 28 seconds remaining to put Mortimer Jordan ahead 44-42. The Hornets got a couple of shots to tie or take the lead in the closing seconds but couldn’t get them to fall.

Locust Fork (12-3) got nine points each from Clay Smith and Dillon Burton.

Mortimer Jordan (13-1) got 11 points from Louis and 10 from Ben Hardiman. Lady Hornets

Locust Fork got 16 points, nine rebounds, and five assists from Kasi McMillian in a 49-39 victory over Huntland ( Tenn.) in the first round of the DAR Tournament.

The Lady Redskins, ranked No. 1 in Class 4A, bolted out to a 17-4 lead after one quarter and never looked back in a 45-point blasting of the Lady Aggies.

Points were hard to come by in the boys game. Fairview led 7-6 after one quarter but the Redskins got a couple of long three-pointers from Joel Wester and outscored the Aggies 12-8 in the second quarter to take an 18-15 lead at the half.

The Redskins were solid on defense in the third quarter and led 26-20 going into the fourth.

Fairview cut the Redskin lead to two points early in the quarter but Oneonta hit 11 of 13 free throws in the final quarter to get the win.

Fairview (8-4, 1-2 in Area 13) was led by Peter Kessler with eight points while Blake Parker and Elijah Garrison had seven points each.

Oneonta (3-3, 2-0) got 11 points from Avery Reid and 10 from Jalen Johnson. Playing in his first game of the year, Johnson was six-of-six from the free thrown line in the fourth quarter. Stedman Bothwell had eight points, 11 rebounds, and four blocked shots.