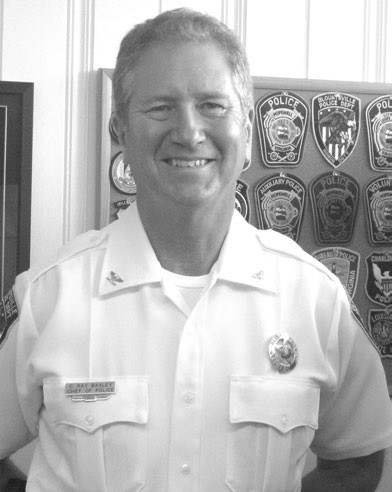 Ray Baxley has been on the job as Blountsville’s new police chief since April.

The Town of Blountsville recently welcomed C. Ray Baxley as its new police chief. Although his name may not be familiar, chief Baxley served 31 years as deputy police chief in Hopewell, just not in Alabama.


Chief Baxley retired from the Hopewell, Va., police department after serving 31 years as deputy and six months as interim police chief. Once his retirement was definite, Baxley wanted a change of scenery – with specifications.

Using the Internet, Baxley searched job openings. “I wanted to be police chief in a small town, a place where I could get to know the people and be a part of the community,” the chief said. When his search criteria matched with Blountsville, Baxley was intrigued. “I sent in my resume and within a week or two they called and asked if I could come down to interview,” said the chief. The interview apparently went well. Chief Baxley has proudly served Blountsville since April 1, 2009.

Chief and Mrs. Baxley have three grown children and seven grandchildren living in Virginia and North Carolina. One of his daughters, along with his wife, bravely made the move to Alabama. “The deal was,” the chief teased, “that she (my wife) got to choose the house she wanted.” He went on to add that, “Actually, she was very supportive.”

Pictures of the Baxley family already adorn the chief’s office, alongside awards and memorabilia of his law enforcement career. Among his medals, a Purple Heart recognizes his injuries suffered in the line of duty. The chief also displays a collection of patches from different law enforcement agencies across the United States.

One of the Baxley daughters follows in her father’s footsteps. “Growing up, she always wanted to go into law enforcement,” he said, “and I tried to discourage her. It’s too dangerous.” Persuaded by her determination, the chief eventually conceded to his daughter’s dream. “She brought me a sketch of the agility course she would test on, and I made one just like it in our back yard,” Baxley recalls. He and his daughter now share the same career anniversary date; albeit 26 years apart.