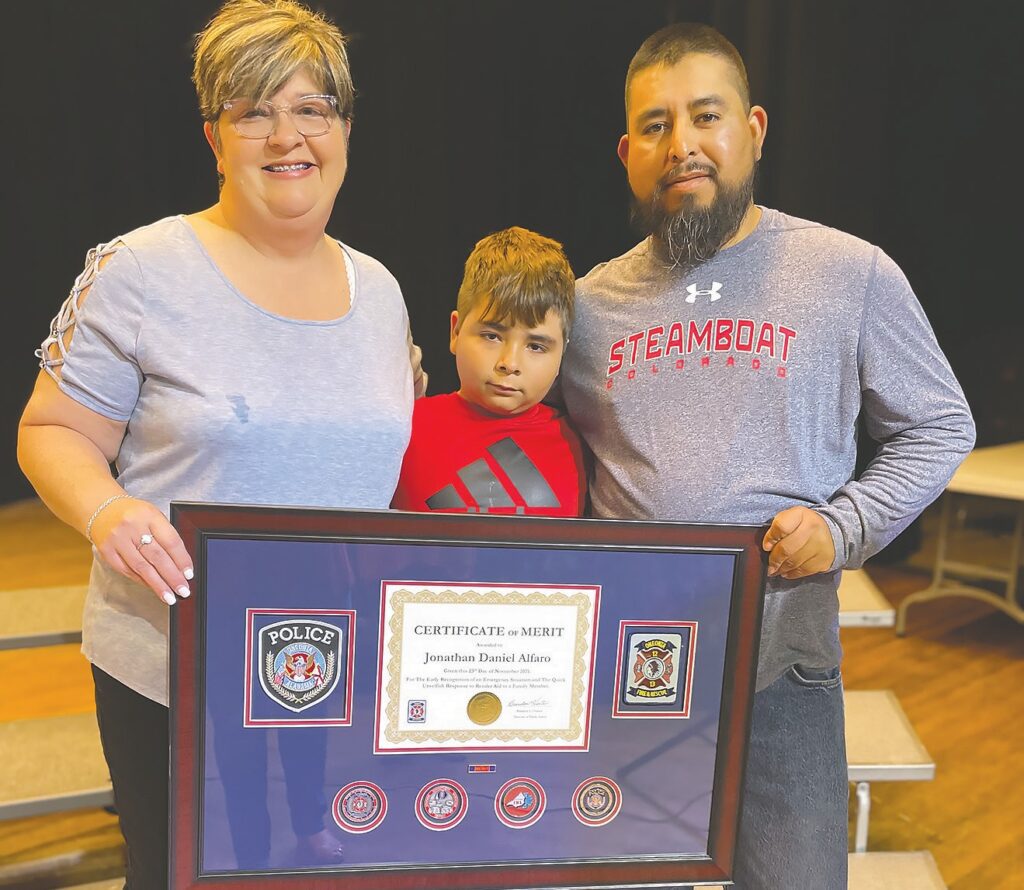 Thanksgiving Day has come and gone, and the Christmas season is officially underway. But for one family, Thanksgiving and the upcoming holiday will be extra special. Not because of all the lights, gifts, celebrations, or gatherings, but because of the actions of a 9-year-old boy that saved his mother’s life.

On the evening of Oct. 24, Regina Alfaro began having extreme pain in her side and back. It was very uncomfortable, but having no history of heart trouble and a complete cardiac workup over the summer, Alfaro thought she had a painful gas buildup. She soon began having what she believed was a panic attack. Alfaro’s son, Jonathan Daniel (J.D.), was right by her side as he was concerned about her discomfort. He kept telling his mom to “take deep breaths.”

As Monday morning dawned, Alfaro continued having extreme pain. She called into work and slept on and off most of the day still believing she was having a gas attack. J.D. was out of school that day and home. About 4 p.m, Alfaro got out of bed and took J.D. to football practice. She was still hurting very badly.

When Alfaro dropped J.D. off at practice, she told him she was running to Jack’s to get something to eat and would be right back. After trying to choke down a few French fries, the intense pain increased. She got out of the car and began pacing in an attempt to get some relief. Nothing worked.

Football practice finally ended and before heading home, Alfaro took J.D. by Jack’s to get him something to eat. Her pain was now so intense that she told him she was not even able to pull through the drive-thru to order. He went inside and returned shortly with his dinner.

As the duo drove home, Alfaro kept telling J.D. that she needed to pull over. He encouraged his mother to do so, but Alfaro continued on.

Upon arriving at home, Alfaro immediately got out of the car screaming in pain. She dropped her phone and keys in the yard and once again began pacing. J.D. took his food inside, but returned to check on his mother. She was lying on the ground, and, although he thought she had fallen, Alfaro simply could no longer handle the pain and laid down.

J.D. kept telling his mother he was going to call 911, but Alfaro insisted that he not do that. Unsure what to do, J.D. called Alfaro’s adult niece and she stayed on the phone with J.D. as she headed toward their home.

Despite being told not to call 911, J.D. decided he could no longer wait as nothing was helping to ease his mother’s pain. He dialed and was connected with Blount County 911. Alfaro said she could hear J.D. talking to the 911 dispatcher, and, at one point, heard him say he did not know and would let them speak to an adult. It was then that he handed the phone over to Alfaro’s niece.

Emergency units were en route and Alfaro’s husband had now arrived on the scene. He had originally decided to load her into the car and head toward the hospital, but Alfaro convinced him to wait as emergency services would be there within minutes.

Alfaro was loaded into the ambulance and taken to Ascension/St. Vincent’s East where she had an EKG that revealed she was having a heart attack despite having no pain in her chest. Alfaro had three stents implanted in two arteries.

After being discharged on Wednesday, Alfaro stopped by Oneonta City School to take J.D. home with her. No one had actually told J.D. that his mother had a heart attack and the severity of the situation. Upon doing so, both broke down.

Doctors later determined that the cardiac work up completed just a few months before had looked normal because ALL of her arteries were blocked. There did not appear to be any abnormalities in the highly reliable test that has a 90 percent sensitivity rate. Known as balanced ischemia, the stress test failed to reveal relative perfusion defects in the affected segments.

On Friday, Nov. 12, Alfaro had three more stents placed in the artery behind her heart and has begun feeling “much better.” Looking back, it scares her to know what might have happened had the heart attack taken place while she was driving J.D. to and from practice, but she is extremely thankful that things worked out as they did.

Alfaro, who has worked in healthcare for more than 23 years, said the family has discussed calling 911 when it is an actual emergency and not like the time when J.D. was three and he called because all of his toys were stolen. Alfaro never thought how one of these conversations might have been the lifeline for herself.

On Tuesday, Nov. 23, representatives from the City of Oneonta and Oneonta Fire and Rescue presented J.D. with a “Hometown Hero” award while attending an assembly at the school. They want students to know that calling 911 at the appropriate time can indeed save someone’s life – someone like Regina Alfaro.

Oneonta Fire and Rescue Sgt. Jonathan Ledbetter had this to say about the importance of knowing when to call 911: “This is why we make such a concentrated effort to educate the children of our community on what to do when there is an emergency. In this case, he [J.D.] did exactly what we teach and that was to activate 911. His actions, without a doubt, saved the life of his mother and this is why we recognize him as a hometown hero.”

Several have asked if J.D. got in trouble for going against his mother’s request. To this, she will tell you, “No.” In fact, J.D. is her “hero,” and she is delighted to be able to spend the holiday season with her family.