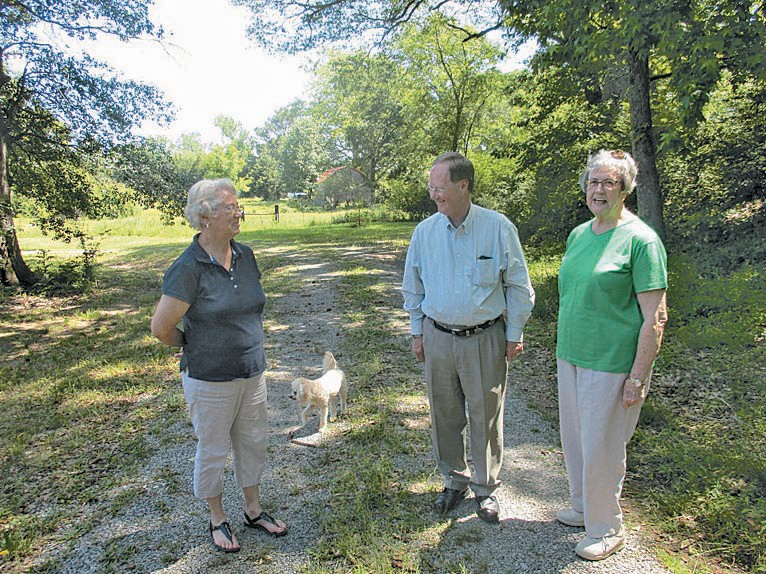 The Alabama Legislature passed a resolution in April, recognizing Blountsville Historical Park as a state historical site, and placing it on the State Registry of Historical Places. The legislation was introduced by District 11 Rep. Randall Shedd and supported by remaining members of the Blount County delegation. 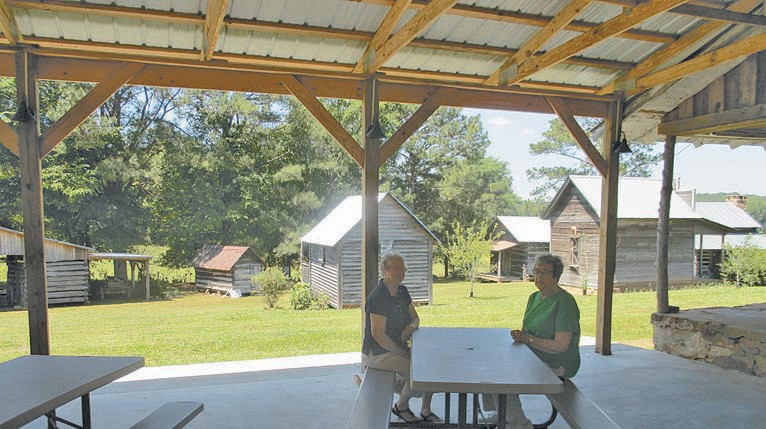 Betty and Jane relax in the shade of the large pavilion that is one of the park’s new structures. In the background are a number of the 19th century buildings that have been moved to the park – with one exception – from original sites in Blount County.

The resolution focuses on a section of the old St. Stephens-Huntsville road passing through the park that was once a major artery for early settlers caught up in the throes of “Alabama Fever” during the period from the 1810s through the 1820s. It was also an important military road in the early years, enabling Tennessee volunteers to join Andrew Jackson en route to the decisive victory at Horseshoe Bend that broke the power of Creek Indians in the territory once and for all.

“This official designation recognizes the historical value of the St. Stephens- Huntsville Road and of the park devoted to the early history of the area,” Shedd said. “I know how hard they’ve worked to build this fine park using local funds, some grant money, and a lot of effort by the historical society and others. This designation recognizing it as an official historical site should make those efforts to fund additional projects a little easier in the future.” Park buildings

Several of the park’s dozen-plus buildings are visible in the view from inside the new pavilion. While the park predates 2012, a number of the buildings have been acquired from local owners, moved from their original sites in the county, and reassembled or rebuilt at the park within the last five years. Several buildings are decorated inside in the manner and style of the 1820s. The buildings are identified below in order of their appearance from left to right in the photo above.

• A log dogtrot barn, a style that was fairly common on county farms from the 1800s to the mid-1900s, by which time many had disappeared; houses early-era agricultural implements.

• The small Graves Cabin, so-called, though probably used as a corn crib or outbuilding; moved from the Joy Road vicinity.

• homestead Cabin (front half visible), only structure in park not originally sited in Blount County; small cabin with a sleeping loft, similar to what would have been occupied by small families in the 1820s; moved from Tennessee in recent years.

• Brooksville Post Office (narrow lathing exterior), dating from 1836; moved intact from Brooksville; still retains design of original post office with shelving, window for buying stamps, and “liars’ bench” for rainy day socializing. ( “We forgot to notify the state highway department when we moved it that we were going to be hauling it down major highways, (U. S. 278 and U. S. 231),” recalled Wright. “Probably a smart move,” Shedd intoned softly.)

• Chamblee House (log structure barely visible just behind and beyond Brooksville Post Office; dating to 1823, one of oldest structures on its original site in the county, moved to the park from the Copeland Cove area and rebuilt about three years ago; two-story residence, at one time occupied by a family of nine; referred to in older historical references (though not recently) as cabin used in the slave trade in early years. Buildings not shown

• Freeman House Museum, built in the 1800s as a two-story wood and brick house; rebuilt in the 1930s as a one-story house, using materials from the original structure; now a museum and unofficial park headquarters.

• Pavilion, a modern roofed structure suitable for seating or serving 50 to 100.

• Society Chapel, a small building built according to a classic design for rural and village churches over the last 100 years. Used for weddings and related events.

• Bear Meat Cafe, a recently built concession stand serving snacks and hot dogs, named for the original Bear Meat Cabin, the earliest-known cabin in Blountsville, giving its name to the settlement that grew up around it in its early years.

• Restrooms, not in the same category as historical structures, but important to visitors in rendering the park suitable for longer visits. Future projects

Two more historic structures are high on the Blountsville Historical Society’s strategic wish list for the park: an old-time country general store, and a vintage 1800s schoolhouse. They have a couple of possibilities spotted, but if you know of one, give Betty a call at 429-2468. Other desired items: more antique agricultural implements, and old photos of Blountsville and/or nearby areas of the county. Antiques would be of interest, but only if they’re bona fide museum pieces. That’s a nice way of saying, “no junk, please.” Ideas for events

In recent years, word is getting out about Blountsville Historical Park – one of the county’s best-kept secrets for an event destination. Here are examples of kinds of events that the park is hosting.

The park doesn’t yet have established daily hours, although they’re working on it. Meanwhile, if you want to tour the park during the day, call Betty at 429-2468 and someone will be dispatched to assist you. There’s no charge, but don’t get your feelings hurt when they show you the box for donations. That’s their only recurring revenue source right now. Don’t be shy.