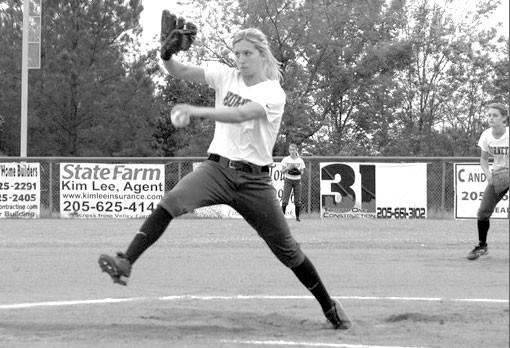 The road to the state softball tournament should be a little easier for area champions. If that’s the case, there should be a big advantage for Appalachian, Hayden, and Susan Moore this week.

Locust Fork and Southeastern will participate in regional tournaments, as well, but the Lady Hornets and the Lady Mustangs finished as runners-up and will face area champions in the first round. 1A Area 12 at

Appalachian took care of business in the 1A Area 12 tournament with an 11-2 win over Shades Mtn. Christian and then back-to-back thumpings of Southeastern to win the title. Both Appalachian and Southeastern qualified for the North-Central Regional Tournament in Tuscaloosa. 3A Area 7 at Susan Moore

Susan Moore was the regular season champion and the Lady Bulldogs were the host for the tournament. The home field advantage turned out to be big as Susan Moore got past Glencoe twice for the title.

In the first game, Susan Moore eased past Cleveland 11-2 behind the pitching of Kayleigh Eller. Kailee Smith (2 for 3) and Ashley Smith led the Bulldog offense.

Susan Moore defeated Glencoe 2-1 in the winner’s bracket final with Chelcie Ogles on the mound. Alicia Williams (2 for 3) led the Susan Moore offense while Christa Lynn, Indya Foster, Ashley Smith, Jana Simoneaux, and Sydney Hansard each had a hit.

It was a rematch in the championship game and again the Lady Bulldogs got past Glencoe by one run, 4-3.

Ogles picked up the win on the mound and Ashley Smith (2 for 3) was the only Bulldog with more than one hit. 4A Area 12 at Oneonta

The Lady Redskins knocked off Fairview 10-0 in the first game while Locust Fork dropped a tough 2-1 game to St. Clair County.

After Oneonta fell to St. Clair County 4-2 in the winner’s bracket final, the hosts met Locust Fork (after the Hornets took care of Fairview 6-1 in an elimination game) with a berth in the playoffs on the line.

Oneonta jumped out to an early 2-0 lead and led 3-1 after four innings. However, the Hornets got back-to-back home runs from Christian Rhodes and Haley Glasscox as part of a three-run fifth and the Hornets led 4-3.

Montana Armstrong singled and scored two batters later on a double by Tailor Massey and the lead grew to 5-3.

The Redskins didn’t roll over. With two outs in the seventh, Oneonta got a run on a fielder’s choice and three straight walks but Rhodes got a huge strikeout to end the game with the bases loaded.

Rhodes went the distance and gave up just three hits with with 12 strikeouts but also walked 12.

The win clinched a playoff berth for the Lady Hornets and a rested and ready St. Clair County team pounded out 16 hits in a 14-2 victory in the area championship game.

The Hayden Lady Wildcats were the top seed in the 5A Area 12 Tournament but the tournament was moved to Mortimer Jordan because the field at Hayden was not ready.

Hayden opened up the tournament with an 11-1 blasting of fourth-seeded Walker. Katie Parr blew away the Lady Vikings, allowing a hit and a walk with eight strikeouts.

In the winner’s bracket final, Hayden met up with Curry and it took eight innings to decide the outcome with the Wildcats winning, 2-1.

The Wildcats got an early run on backto back triples from Brooke Meadows and Katie Parr. Caitlin Kirkland limited Curry to six hits and struck out seven in eight innings.

Meleah Hargett and Meadows had back-to-back singles in the eighth inning and the winning run came in on an errant throw on a pickoff attempt.

In the championship game, the Lady Wildcats turned to Sharley Miller and the freshman never let Curry get comfortable in a 3-0 win.

Miller struck out eight and was never really in serious trouble against a potent Curry offense.

Madalyn McMickin slammed a home run in the second inning and Kayla Byrd reached on an error and scored later in the inning.

The final Wildcat run came in the four inning. Nikki Witt got on with a walk and later scored on a double off the bat of Madison McMickin.