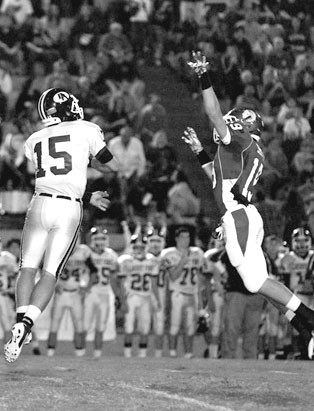 Locust Fork head coach Mike Bramblett is looking at a tough schedule for 2012. However, it may not be nearly as daunting as 2011’s turned out to be.

The Hornets won the first game of the 2011 season (28-18 over Crossville) but then lost nine games in a row. Only a 28- 16 loss at St. Clair County in Week 3 was even close as the Hornets struggled to stop anyone.

The offense, led by Geoffrey Bramblett, put up some decent numbers – and Bramblett was a fantasy football keeper, at times.

Unfortunately, the Locust Fork defense gave up almost 50 points per game (49.7) and better offenses lit up the scoreboard.

Locust Fork replaces some of the region heavyweights – Anniston, Alexandria, Cleburne County – but the new opponents (Guntersville, Fairview, Sardis) are not easy wins by any means.

The Hornets stay in 4A Region 6 but only Oneonta and St. Clair County remain as region opponents.

Locust Fork opens the 2012 season on the road with a visit to New Hope and the 3A Indians are led by third-year head coach Randall Taylor.

New Hope was 3-7 a year ago and gave up a little more than 33 points per game.

The Indians have some experience returning but senior quarterback Corey Collier transferred to Hazel Green.

These teams have met seven times over the years and Locust Fork leads the series 5-2. Locust Fork won the last meeting 34-28 in 2003.

Sardis visits Locust Fork for the Hornets’ home opener and this game will serve as an early measuring stick for both teams.

The Lions were a very good 3A team last year – 9-1 in the regular season – but tailed off at the end of the year with losses to Boaz and Saks after a 9-0 start.

Former Etowah head coach Gene Hill is in his second season at Sardis and in senior running back Toby Pee he has one of the better players in the region. Pee rushed for 1565 yards and 17 touchdowns last year, including 145 yards and three scores against eventual 3A runnerup Madison Academy.

This will be the first official meeting between the two teams.

Locust Fork travels to Oneonta in Week 3 for a meeting with what is expected to be one of the region big dogs.

The Redskins are coming off a 12-3 season a year ago that ended with a 42- 28 loss to Jackson in the 4A title game at Bryant-Denny Stadium.

Oneonta graduated just four senior starters but there are some obvious holes to fill on both sides of the ball.

Fairview and Locust Fork meet in Week 4 and this has all the makings of a shootout.

The Aggies have one of the best dualthreat quarterbacks around in Luke Bailey (6’2, 200 Sr) and this is a Fairview team that averaged almost 38 points per game last year. The problem is the Aggie defense surrendered almost 26 points per game.

Fairview finished the regular season 7- 3 last year and then got hammered 55-41 by Alexandria in the first round of the playoffs.

These teams have played five times over the years and Fairview leads the series 3-2.

Locust Fork steps out of region play in Week 5 with a trip to Blountsville to face J.B. Pennington. These teams have met 43 times – Pennington leads the series 26-16-1 – but this will be the first meeting since 2005.

The Tigers are coming off an 0-10 season in 2011 and are just 3-26 over the last three years. New head coach Keith Garner’s team will have already faced tough, physical region opponents Pisgah, Sylvania, and Plainview after opening with Cleveland and depth may be a problem for the Tigers.

Locust Fork is back in region play for Week 6 as Crossville comes to Hornet Stadium.

The Lions were 3-7 a year ago but will be led by former Ole Miss director of basketball operations Robi Coker, who has returned to his alma mater to try and revive the football program.

Crossville has some talent at the skill positions but has lost starting quarterback Brody White, who tore an ACL last week during Albertville’s passing camp.

These teams have met three times over the years with Crossville holding a 2-1 advantage in the series.

Locust Fork travels to Douglas for a Week 7 showdown with the Eagles.

Douglas head coach Brian Knapp is trying to mold the Eagles into a physical, hard-nosed unit and last year’s team went 4-6 in his fourth year.

The Eagles had all kinds of trouble with teams that spread the field, giving up 48 points to Fairview and North Jackson and 31 from Guntersville.

Locust Fork and Guntersville are not that far apart but when the Wildcats visit Hornet Stadium in Week 8 it will be the first ever meeting between the two teams.

Guntersville is coming off an 8-3 season that ended with a thud – a 42-7 home loss to Oneonta in the first round of the playoffs.

The Wildcats return a lot of talent from that team and are expected to be one of the region favorites under third-year head coach Lance Reese.

One of the assistants for Reese is former Locust Fork head coach Ryan Thomas.

St. Clair County is one of the three Region 6 holdovers (with Locust Fork and Oneonta) from last year and the Hornets will visit Odenville for the final region game of the season.

The Saints were young last year but finished a respectable 4-6 and that included a huge region upset of Cleburne County (28-20 on the road).

St. Clair County is not getting much attention in the preseason but this might be a team capable of finishing in the top four of the region and making the playoffs. The Saints will have lots of speed and quickness and last year’s young linemen will be a year older and stronger for head coach Alan Lee, who is in his 11th year at the school.

The Hornets will close the year with a visit from old rival Cleveland.

Cleveland has moved up to 3A this year and will have already faced Susan Moore, Piedmont, Saks, and Glencoe.

The Panthers were 3-7 last year in a very tough 2A Region 7. Second-year head coach Danny Adams is looking for improvement from his young team but the schedule this year is very tough.