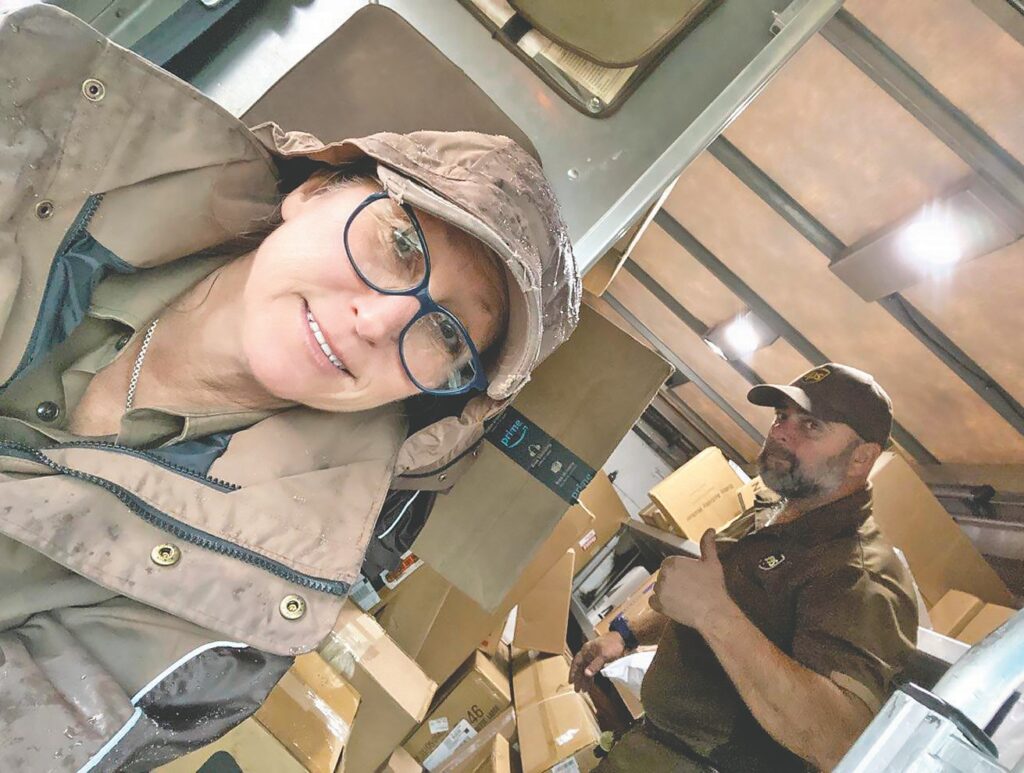 When Mike Nicholson began his day as a UPS driver during the Christmas rush, it started off just like any other day. He arrived at work, checked the books, and made plans to head out for the long day. Because of the need for extra help during the holiday season, Mike’s normal routine is to stop and pick up his wife Mandy after he is loaded and the delivery process begins. He usually arrives to pick her up around 10 a.m.

As Mike headed down Ala 75 to pick up Mandy, he and a truck with a horse trailer seemed to be traveling the same speed in both lanes. Mike recalls the trailer was not carrying horses, just some barrels. Finally, near Remlap, the truck took the initiative to speed up and get ahead of the UPS truck near the Super Saver.

It was at that time a car with a female driver and no passengers came out of nowhere, traveling at a very high rate of speed, and ended up in a concrete ditch/ ravine area after flipping several times. The car was going so fast that it went airborne and hit the top of a tree. Mike, having just witnessed this accident, immediately pulled over, grabbed his fire extinguisher while calling 911, and ran down to where the car finally came to a stop.

Upon arriving at the accident scene, there was no one in the car and he began looking for a body. He was running around trying to locate the female when he headed up the concrete ditch. Within just a few seconds, Mike saw a lifeless body and lots of blood; all of the skin on her leg was gone.On the phone with 911, Mike was fearful that the young lady was dead.

When he reached the body, Mike noticed that she did not appear to have any blood coming from her head or facial area and hoped there was no head trauma. Within five minutes, help arrived. A lady who had parked at Southeastern School, Blount EMS, and Blount County Sheriff’s deputies were on the scene and took over. The victim was tended to and rushed to the hospital.

First responders took a statement from Mike, who was visibly and emotionally shaken, and he was soon on his way to pick up Mandy to continue his day as planned. Because he was now 45 minutes late, Mike called Mandy to let her know something had happened and he would explain.

Now back to his normal routine, Mike was alerted on his computer that he had a noon delivery to Walmart that had to arrive on time. Mike knew he had enough time to make a stop on Park Avenue and unload two large boxes that would make getting to the other packages easier if they were delivered first.

Mandy took the first box and headed to the door. As she approached the screen door, an adult female began pulling her into the house through the patio. She was visibly panicked. At first, Mandy was frightened. She has been to this home on several occasions and nothing like this had ever happened to her.

While he was getting the second box, Mike heard Mandy screaming inside the house.Because this home receives packages on a regular basis, Mike knew the family had just gotten a new dog, and he immediately thought the dog may have jumped on or bitten Mandy.

Mike quickly proceeded to the home where he discovered an adult female and older teen panicking. They did not speak English and communication was almost impossible.

Almost immediately, Mike saw a developmentally delayed teen who appeared to be choking. It was evident the child had some type of spinal cord injury and needed assistance with daily activities, including being fed. The child was grabbing his throat like he was gagging. Mike had to make a quick decision to save the child from choking with risk of possibly injuring him further. And without any hesitation, Mike positioned himself and began administering the Heimlich maneuver in an attempt to save this child.

After a couple of attempts, the food finally dislodged and the child began breathing again. Everyone was relieved as the boy seemed to have no further medical effects from the situation. He was a bit dazed from the ordeal. Everyone was in tears and thankful the ordeal was no longer an emergency. All Mike and Mandy could understand from the family was “Thank you” repeated over and over.

As soon as it was evident the teen was ok, Mike and Mandy boarded the UPS truck and were once again on their way to ensure deliveries were made. Although it had only been about three hours into the work day, and two emergency situations handled, Mike probably should have taken the rest of the day off to gather his emotions and thoughts, but he knew it was peak season. He proceeded to reset as much as possible and finished his day.

Although Mike has worked at UPS for 28 years, he has never experienced a day such as this. He understands the female victim is doing well. He was told that his quick response likely saved her life. Mike also stopped by the teenage boy’s home recently. An adult male was the only one home at the time, and despite the language barrier, the man kept saying over and over “Bless you.”

Mandy said that Mike doesn’t want recognition for his quick actions, but she told him that he was “an angel that interceded” that particular day. She noted that even during peak season when there are long hours, frustrating days, and more work than ever, her husband carries on. His work ethic is solid. He cares about his clients, takes great pride in delivering quality service, and goes above and beyond for them. But on this particular day, he was a hero.