Help! There’s an owl after my pet! 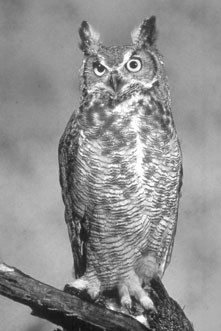 It was, I believe, the saddest wildlife-related phone call I have ever fielded. The call came from a woman who wanted to talk about an owl having killed her small pet dog. Usually, when wildlife biologists get calls of this sort, we are prepared to talk about other predators more likely to have taken their small pets … their pet just turns up missing and the person assumes it was an owl, hawk, or coyote because these creatures had been observed nearby. A pet being taken by a owl is actually a very rare occurrence. I had all the standard answers ready and asked her to tell me what happened. The emotion in the women’s voice was heartwrenching even over the phone.

“Well, it was about dusk,” she said. “I had gone outside with my Chihuahua and I turned my back for a moment, when I heard a short ‘yelp.’ I turned and saw my Chihuahua in the grasp of a large owl, and when I approached, it flew away, carrying my dog with it.” She watched helplessly as the owl carried her beloved pet out of sight. From the description she gave, it was clear the owl was a great-horned owl – the largest owl in Alabama. Thankfully, it also appeared that the dog’s death was quick, and it did not suffer. The woman further explained that her dog had week-old puppies, and now they (and the woman) were left without the pups’ mother.

“Well, I don’t blame the owl. It was just being an owl, I guess. It has to eat, too, and has its role in nature … I just had to tell someone about it.” Frankly, I was moved by her candor, and her conservation ethic was both unexpected and commendable given that she was an eyewitness to the death of her much-loved pet.

Great-horned owls are indeed major birds of prey and rarely do take small pets on occasion. These owls are also the number-one predator of skunks. Any mammal smaller than a skunk – including small cats, kittens, dogs, or puppies – is within the prey-size range for this owl. Ducks, geese, and wilk turkeys are also sometimes taken.

These impressive owls are up to 25 inches tall and have a wingspan of 60 inches. They are generally brown in color with darker brown spots and white throat feathers that contrast with a belly appearing finely barred horizontally. Their white throat feathers are very conspicuous. Great-horned owls get their name from their large, erect feather ear “tufts” set far apart on their head. The face may be orange or grayish with white feathers forming a “V” between the yellow eyes. These owls are often found in urban and suburban areas, as well as wild, forested habitats.