HEART OF A BULLDOG 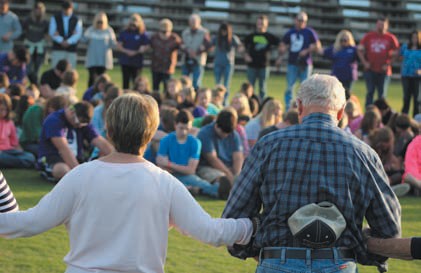 Susan Moore residents of all ages gather on the football field to pray for community healing.

On Sunday, Susan Moore students, community leaders, and residents gathered together for prayer and support after a week of tragedy.

Last week, two people connected with the school died. Their deaths were then followed by school resource officer Beau Cagle being admitted to Huntsville Hospital after suffering a gunshot wound to the chest.

“In my 15 years of ministry, this is the worst week I’ve ever seen a small community have to endure,” said Pastor Dan Boatman, who was on hand at the gathering.

The group broke off into small groups to pray on the Susan Moore football field before walking around the campus to continue prayer. They then reconvened on the field to form a circle around the students and other children in attendance to pray over them. SRO shooting

The prayer meeting was organized the same day Cagle underwent surgery. The shooting did not take place on school grounds and is still under investigation in Marshall County. According to Operations Officer Tim Kent of the Blount County Sheriff’s Department, it was a self-inflicted gunshot wound.

As of Monday, Kent said Cagle’s surgery had been successful, and it looked as though he would be fine.

The shooting happened in the early morning hours Friday. When students arrived at school, an assembly followed during which they were told about Cagle’s condition.

“We met with students and explained what we knew about the situation,” said Susan Moore High principal Mike Stansberry.“Counselors from all county schools were here for any students or faculty members that needed to talk. Officer Cagle is in everyone’s thoughts and prayers.”

Blount County Schools Superintendent Rodney Green said the news came as an awful shock and the school took most of the morning to try and understand what had happened, but then returned to the normal schedule afterward.

“Beau is an outgoing, friendly officer,” Green said.“He had only been at Susan Moore since the beginning of the year; due to his personality he was quickly embraced by everyone at the school. We will be continuing to pray for him, his family, and the Susan Moore community during this difficult time.”

Another SRO has been assigned to the school.