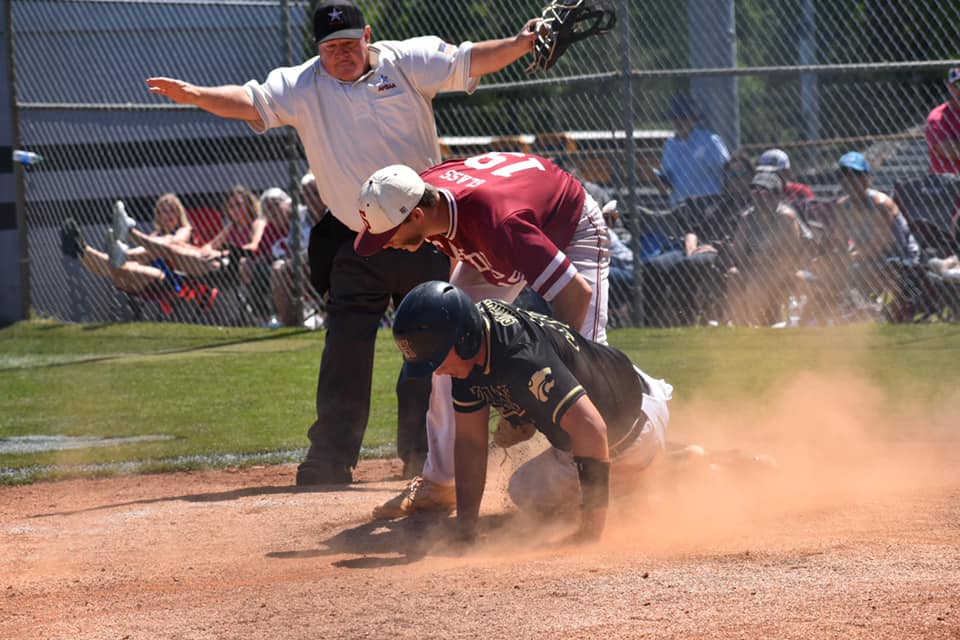 Hayden hosted Region 13 winner Sardis Friday for a best-of-three series for the second round of the AHSAA 5A varsity baseball playoffs. Hayden advanced to round two by sweeping Leeds while Sardis advanced after winning a deciding game three with the West Point Warriors on May 26. Game 1

The game began Friday with the largest crowd at a Hayden baseball game in recent memory. Energy was high on both sides. As the game got going, the Sardis crowd pulled out the cowbells and rang them hard. Play was stopped by the officials and the Sardis coach was told, much to his and the crowd’s displeasure, that the cowbells were not allowed. Apparently from their reaction, this is a tactic they have used all season.

Through the first two innings, Hayden struggled at the plate and Sardis acquired only a couple of base runners off walks and miscues.

In the top of the third, Sardis got things going and put three runs on the board. The Wildcats couldn’t respond in the bottom of the inning and the score stood at 3-0.

The bottom of the fourth showed some promise for Hayden. With one out, Carson Snow singled up the middle giving the Wildcats their first base runner of the game. Snow advanced to second when Caden Mason was hit by the pitcher. Both runners advanced on a wild pitch putting runners in scoring position with one out. Eli Williams hit a hard ground ball to the shortstop side of second base scoring Snow. The next two Wildcat batters were outs, but the Wildcats were on the board and narrowed the Sardis lead to 3-1.

The fifth inning provided two base runners between the teams, but no real threat to score. In the sixth, Sardis firmly grasped the momentum with two more runs. The Wildcats couldn’t answer in the bottom of the inning, but held the Lions at bay in the top of the seventh.

In the bottom of the seventh, Carson Simmons led off with a single, but was thrown out advancing to third on Mason Mullaney’s well-hit line drive to left field. Mullaney eventually scored on an error, but it was too little too late. The Wildcats finished the inning with a strikeout and the loss.

Cole Loftis started on the mound for the Wildcats and took the loss. Loftis went the distance allowing five runs on six hits while striking out seven and walking two. 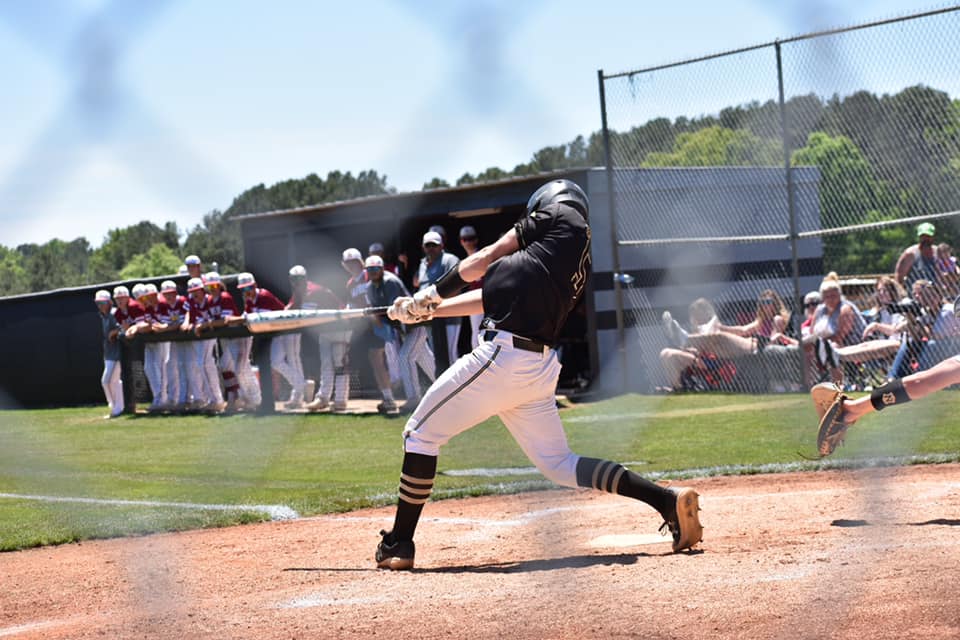 Facing the end of their season, the Wildcats were in a do-or-die situation. With the lead-off at bat, the first three Hayden batters struck out.

In the bottom of the first, Sardis’ managed one run. For the next five innings, Sardis had five base runners and Hayden had nine. Hayden worked to force a run across the plate in the sixth, but to no avail. Mason walked to lead off the inning and Cole Sims came in as a courtesy runner for the catcher. Sims moved over to second on a sacrifice bunt by Williams. Collins singled to left field and the Wildcats tried to score the speedy Sims from second, but he was thrown out at the plate. Simmons grounded out to third to end the Wildcat attempt at tying the game.

In the bottom of the sixth, Sardis looked to extend their lead with runners on second and third with two outs, but Wildcat pitcher Collins secured a strike out on four pitches to end the inning.

With the game on the line and the end of the season three outs away, the top of the seventh inning was big for Hayden. A leadoff walk by Loftis gave Hayden the tying run on first base. Coach Lucas Drake brought in the fleet-footed Sims as a pinch runner for Loftis. On the second pitch to Mullaney, Sims stole second to get into scoring position. Then with a 3-2 count, Mullaney singled to right-center scoring Sims and the Wildcat bench and fans erupted.

Kyler Leamon attempted to sac bunt Mullaney to second, but Sardis took the fielder’s choice and threw out lead runner Mullaney. Braden Hodges came to the plate and also hit a ground ball into a fielder’s choice putting out Leamon at second.

At this point, Sardis’ starting pitcher had crossed his 120-pitch limit and had to leave the mound. On the reliever’s first pitch, Snow hit a high chopper to third. The throw was late as Snow crossed first for the infield single. Mason was beaned pushing Snow to second and Hodges to third to load the bases. The inning ended on a swinging strike out with three stranded. The Wildcats tied the game.

In the bottom of the seventh, Sardis stranded one runner at second, but could manage no runs.

To begin the eighth inning, the tension was high and the crowd was loud. With two outs, Loftis singled to right field and reached second on an error. He advanced to third on a passed ball and Mullaney then walked. Next, Leamon hit a ground ball to third and beat the throw for an infield single scoring Loftis.

The raucous Wildcat crowd became a deafening roar. Mullaney and Leamon advanced on a wild pitch to Hodges putting two more runners in scoring position. Hodges then singled on a hard ground ball between third and short into left field scoring Mullaney and advancing Leamon to third. Snow was beaned to load the bases and a walk by Mason pushed Leamon across the plate for the third run of the inning. The at-bat ended on a ground out to short by Williams, but the Wildcats led 4-1.

With Snow still on the mound and facing a pitch count that could prevent him from pitching game three, the Wildcats prevailed. Snow faced five batters throwing minimal pitches to each. Two strikeouts and a fly ball to short ended the game.

Loftis led the Wildcats at the plate going 2-for-3. Mullaney had possibly the biggest hit of the game when he singled to right field on a 3-2 count to score Sims from second tying the game in the top of the seventh.

With the series knotted at one each, the deciding game was played on Saturday. 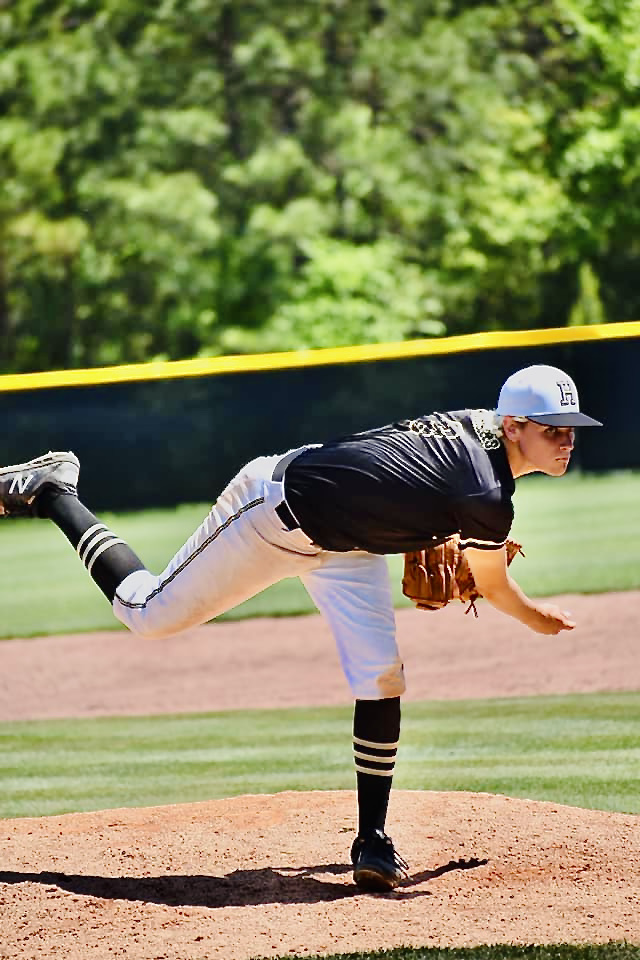 Eli Williams relieved starting pitcher Carson Snow with one out in the top of the sixth. -Lena Simmons

The Wildcats faced the Lions for a high-noon showdown to decide who would advance to round three. The crowd wasn’t quite as large as Friday, but was every bit as loud with tensions high on both sides.

The first inning started off with Sardis at bat, but only one man got on base due to a bean ball. Hayden’s Hodges led off the bottom of the first with a single over second base. Snow laid down a bunt to third base to sacrifice himself and move Hodges to second. With no one covering the bag on the play, Hodges also took third. Mason then hit a sacrifice fly to left to score Hodges, plating the first run of the game. In a questionable call, the officials brought Williams back to the plate to hit after being beaned in the back of the arm on a curveball that didn’t break. Williams then flew out to right field. After one, the Wildcats were up 1-0.

The second inning provided some base runners for both teams, but strikeouts prevented them from scoring. The top of the third was a three up, three down inning for the Lions. The bottom of the third, though, was an eruption for Hayden.

With two outs, Snow reached base on a bean ball to the left elbow. While Mason was at the plate, Snow stole second and third, then scored on a passed ball before Mason walked. Sims entered the game as a courtesy runner for Mason and promptly moved to second when Williams hit a hard ground ball at the third baseman, who let the ball run between his feet. On a 2-0 count, Collins tripled to right field, scoring Sims and Williams. Simmons then stepped into the batter’s box and hit another hard ball at Sardis’ third baseman who once again errored trying to throw Simmons out at first. Collins scored and Simmons took second when the thrown ball went out of the field of play. With the Wildcats up 5-0 and the Sardis ship taking on water, the Lions pulled their starting pitcher. With Cole Loftis at the plate, Simmons took third on a passed ball and then scored as Loftis singled to left. Mullaney singled moving Loftis to second, but a ground out ended the inning with Hayden holding a commanding 6-0 lead.

The fourth inning was a three up, three down inning for both teams. The top of the fifth saw some life out of Sardis. A combination of hits, Wildcat errors, walks, and bean balls allowed the Lions to post three runs. Hayden got two runs back in the bottom of the fifth as Collins and Simmons scored on a single to centerfield by Mullaney. After five, the Wildcats led 8-3.

Sardis managed three more runs in the top of the sixth to try and take a bite out of the Wildcat lead. With a new Lion pitcher, Hodges struck out, Snow singled, and Mason was beaned. Sims came in to run for Mason. Williams grounded out to short, but moved Snow and Sims to third and second. Collins hit a ground ball to third, and an error allowed Snow and Sims to score. Collins then moved to second when Simmons was beaned at the plate. On a 3-1 count, Loftis hit behind his runners into right field. Collins scored and Simmons took third, Loftis advanced to second on a throw home. With Mason Mullaney at the plate, Simmons took home on a passed ball. Mullaney then flew out to end the inning. After six, Hayden had a six run 12-6 lead.

In the top of the seventh, Sardis’ coach was ejected after arguing a call at first. When play resumed with two outs, a fly ball to second ended the game. The Wildcat players went crazy, the fans were deafening, and the Wildcats advance to round three.

The win moves Hayden into the third round of the AHSAA State Playoffs. The Wildcats will host the Madison Academy Mustangs, a private school out of the Huntsville area, on Thursday. Game one begins at 4:30 p.m. Only one other Hayden team has journeyed deeper into the baseball state playoffs.

The 1994 Wildcats, coached by Kim Hargett, made the semi-finals that season. The series win puts Hayden’s record at 19-11.