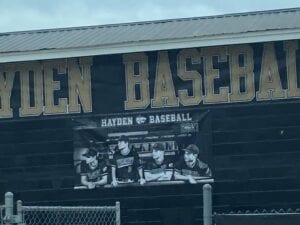 The Hayden Wildcats watched their first game of the season slip away early Saturday losing 11-1 to Hueytown.  The Wildcats struggled to put runs on the board and had a tough time defensively containing Hueytown, giving up 11 runs.

The Wildcats showed some early promise when Kyler Leamon was hit in the helmet by a pitch putting him on first with one out.  Braden Hodges stepped to the plate and took the third pitch from Mason Kirby deep to left field over the top of the defense.  Left fielder Vincent Tucker robbed Hodges of a multi-base hit with an ESPN SportsCenter-worthy over-the-shoulder catch at the warning track.  Leamon was then tagged out in a rundown to end the half inning.

The two runs the Gophers scored in the first would prove to be enough as the Wildcats could only muster one run for the contest.  Carson Simmons scored with one out in the fifth after reaching base on an infield single deep in the hole between short and third.  Simmons moved to third sliding under an attempted tag after Eli Williams singled. Simmons then scored on a wild pitch.  The scoring ended with groundouts by the next two batters.

Mason Kirby led Hueytown to victory on the pitcher’s mound. Kirby gave up no runs and no-hit the Wildcats over four innings.  Kirby struck out four and walked one while beaning another. Luke Walden moved over from first base in relief and threw two innings.  Walden gave up one run on three hits, while recording one strike out and one walk.

Mason Mullaney took the loss on the mound for the Wildcats. The righty surrendered four runs on three hits over three innings, striking out one and walking three.  Eli Williams and Braden Hodges came in from the field for relief.  The Hayden defense committed five throwing errors for the game.

The loss moves the Hayden Wildcats to 0-1 for the season.  The next game for the Wildcats is against the 6A Springville Tigers.  The game was moved from Monday, Feb. 15, to this afternoon due to winter weather moving into the area Monday afternoon.  The Wildcats are slated to play Oak Grove at home tomorrow, Feb. 18.