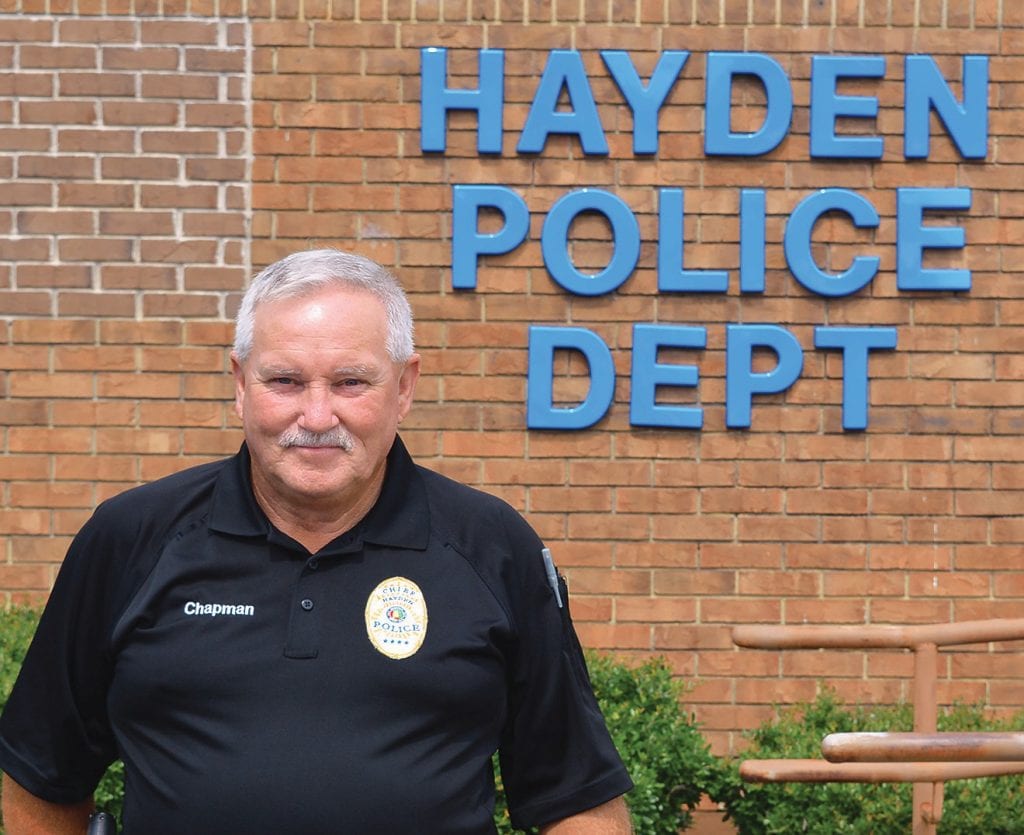 It’s been more than a year since the town council of Hayden voted to start a police department and hired James Chapman (pictured above) as chief.

Running a police department was nothing new for Chapman. He had been chief of Oneonta Police Department for 19 years before retiring in 2016. Building one from scratch, though, is a situation that might have given many other veteran officers some pause, but Chapman said he took it as a challenge. He admitted about a month into the job that it was a formidable task, but modestly said, “I have a lot of knowledge about how to police and how to run a department. I don’t just want to sit at home when I could be sharing this knowledge.”

The to-do list he had to complete to make the department a reality was lengthy. Finding office space, purchasing equipment, obtaining the necessary credentials from both the state and federal governments, and coordinating with Blount County 911 were just the start of an extremely long list.

Chapman gives a great deal of credit for the progress of the department to the support of the town’s mayor and council. Chapman said Mayor Larry Armstrong and the council are “100 percent behind the department.” He also acknowledges Lisa Baker with the county’s Economic Development Council for help applying for grants that have helped with the purchase of equipment.

On March 7, the department officially hit the street patrolling about 25 square miles and responding to 50 or more calls for service each month for the estimated 1,300 citizens. Chapman said the 2010 census put the population of the town at 444; however, the current estimate is that number has at least tripled. Right now, the chief is the only full-time employee, but Chapman has managed to meet the needs of the department by using six part-time officers.

He also points to a great working relationship with the Blount County Sheriff’s Office. “They back us up on calls, and we do the same” for calls for service that are close to the town’s borders.

Chapman said Hayden has a growing population and many new businesses so the number of calls officers respond to each month will only continue to climb. To meet this need, he said the town council recently voted to hire another full-time officer. Chapman has been interviewing candidates and hopes to recommend someone to the council within the next few weeks.

The growing town and department point to good times ahead, Chapman believes. “Things are only going to get better and better.”