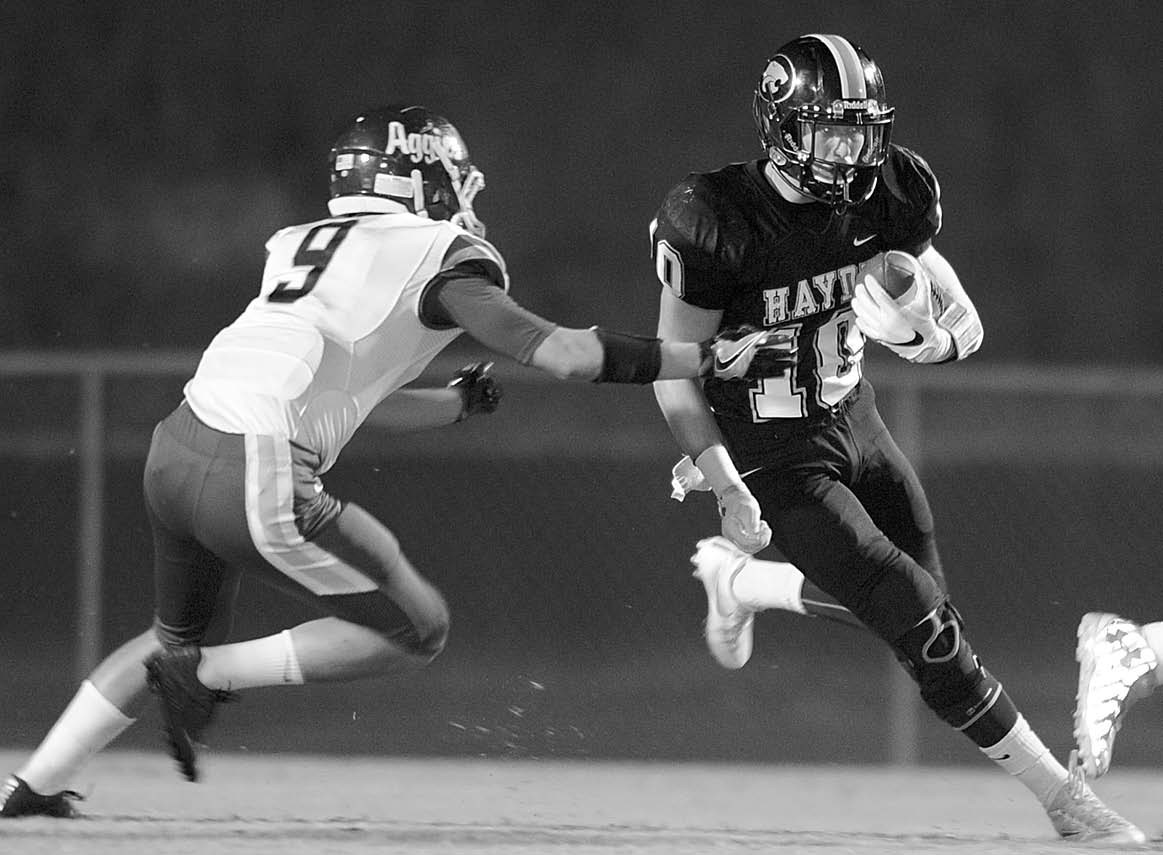 The Hayden Wildcats played host to the Fairview Aggies Friday night for homecoming and came away with a 50- 40 win to move to 7-1 on the year. The last time Hayden was as good as 7-1 after 8 games was 1992.

Forty seconds into the game the Wildcats scored on a 66-yard run by senior running back Leonard Johnson, his first of three on the night. Senior kicker Patrick Ward added the point-after and Hayden was up 7-0.

The Aggies answered right back when Ethan Holland caught a 6-yard pass from Ragan Ashley. Jaxxon Swann’s kick tied the game 7-7 with 7:21 remaining in the first quarter.

The Wildcats and Johnson struck again, this time on a 56-yard run. Ward’s point-after put Hayden up 14-7 with 6:28 still left in the opening quarter.

The Wildcats defense forced a punt and was in business at the Hayden 34. Five minutes later, junior fullback Caleb Wilson scored from 4 yards out. Ward’s kick was true and Hayden had a 21-7 lead with 1:27 to play in the first quarter.

Again the Wildcat defense held and Hayden took over on downs at the Fairview 47. Hayden ended the drive when Ward connected on a 27-yard field goal. The Wildcats had built a 24-7 lead with 6:14 remaining on the first-half clock. Hayden’s defense held and forced their second punt of the night.

The Wildcats capped a 95-yard drive on a 77-yard pass from junior quarterback Sheridan Miller to senior running back Colton Shirley. The point-after missed but Hayden had what seemed to be a commanding 30-7 lead with 2:53 remaining in the half. The Aggies scored on the last play of the first half on a 7- yard pass from Ashley to Sambo Woods. Swann’s kick cut the lead to 30-14 at the half.

Fairview took the second half kickoff and drove 70 yards for the score. Scoot Bennett caught a 7-yard pass from Ashley and Swann’s kick cut the deficit to 30-21.

After recovering an onside kick, the Aggies were in business at the 48. Three plays into the drive, Logan Brooks broke loose on the Aggies’ biggest run of the game, 37 yards for the score. The two-point conversion failed when Fairview’s pass fell incomplete. With 5:50 left in the third quarter Fairview had cut what was a 23-point lead to just 3 at 30-27.

The Wildcats came back on their first possession of the second half and scored on a 43-yard run by junior fullback Levi Snider, his first of two on the night. Ward’s point-after put Hayden up by 10 at 37-27 with 3:32 remaining in the third quarter.

The Wildcat defense held on fourth down and Hayden took over at the 26. Four plays later, Johnson scored his third touchdown of the night on a 59-yard run. Ward hit the point-after to put the Wildcats up 44-27 with 8:33 remaining in the game.

Fairview’s Brooks got his second rushing score of the night on a 6-yard run. Swann’s point-after put the score at 44- 34 with 7:48 on the clock.

Fairview scored with 1:16 when Ashley hit Woods with a 13-yard strike but the two-point pass failed and Hayden had a 50-40 win.

Hayden rolled up more than 500 yards of rushing and leading the way was Johnson, who had 241 yards and three touchdowns on 15 carries. Shirley added 78 yards on eight carries and he led the team in receiving with the 77-yard touchdown reception. Snider had 124 yards and two touchdowns on just four carries and Wilson had 47 yards and a score on 11 attempts. This is the second game that the offensive line has paved the way for at least 500 yards rushing. They are seniors Jacob Brown and A.J. Jarmon, juniors Gavin Torbert and Konnor Register and sophomore Cole Hawkins.

Leading the Hayden defense was Snider and senior linebacker Jacob Sawyer with six tackles each. Shirley had five tackles, one for loss and a pass break-up, while junior defensive end Garrett Rheame had five tackles.

The win moves Hayden to a perfect 5- 0 in Class 5A Region 6 play. The Wildcats travel to Mortimer Jordan Friday to take on the Blue Devils for the Region 6 Championship. Jordan comes into the game 6-2 overall and a perfect 5-0 in Region 6.

The game this week can be heard on WCRL 95.3 FM. Please listen to the Wildcats Den from Phil’s Grill, Thursday from 6 p.m. to 7:30 p.m. on www.wcrlradio.com – the Wildcats Radio Network.