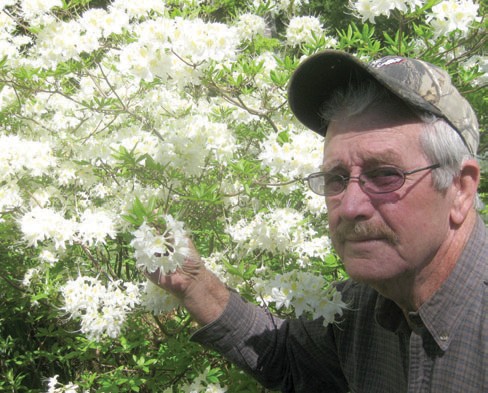 Plant collector Gay Hawkins shows the blooms of one of the largest known native Alabama Azalea displays in the area, if not the state.

Alabama Azalea’s distinctive pure white blooms with soft yellow throats have a spicy, lemony bouquet that is one of nature’s finest fragrances. Described in 1921, the assigned scientific name, Rhododendron alabamense,
reflects the plant’s almost exclusive distribution in Alabama, with only a scattering of occurrences in contiguous states.

The genus name Rhododendron is used to describe about a dozen deciduous azaleas native to the Southeast, sometimes referred to vernacularly as bush honeysuckle, with bloom colors ranging from white to gold to orange and red. The light to medium pink Piedmont Azalea is the most common and widely known in central Alabama. Of the entire ensemble, most would say Alabama Azalea has the most captivating fragrance.

The species, along with other native azaleas, is threatened by habitat loss from real estate development, logging, and herbicide use. In a recent investigation of five Alabama Azalea sites identified from Auburn University and University of Georgia herbarium records, the species at all five sites had been wiped out by logging.

Gay Hawkins, who has collected native azaleas for 40 years and has naturalized a number of them in his moderately shaded yard near the southern rim of Sand Mountain, refers to this mass of foliage as “Goliath,” while showing the visitor that it’s not a single plant but a combination of two. Both were collected about 12 years ago from the Armstead area in Blount County. Besides several native azalea species and cultivars, Hawkins has a number of other rare native plants in his collection including a Yellowwood tree and both species of the native stewartias, the Silky and Mountain Camellias.

Hawkins, incidentally, had a birthday day before yesterday. He is 77.

Alabama Azalea is the subject of a major effort by a retired Auburn University professor emeritus, R. Oneal “Smitty” Smitherman, to elevate the species to state flower of Alabama, replacing the non- native Camellia japonica
or common camelia, which was introduced in the U.S. from Asia in the 1800s and carries the designation currently.

Smitherman has made a life’s work of collecting and breeding native azaleas, (“rhododendrons” he would call them, to be scientifically precise) in addition to planting them across the Auburn University campus. In 2007, he began an effort to collect specimens of alabamense

from all 67 Alabama counties for the Davis Arboretum at Auburn, and launched his campaign to have it named state flower, recruiting the Azalea Society to help lobby legislators to introduce a bill toward that end.

In a recent chain of circumstance involving geologist Jim Lacefield of Colbert County, local nature activist Nancy Jackson of Royal, and the writer, Hawkins became the source of the Blount County specimen of alabamense
destined for the Auburn state arboretum collection. Hawkins donated a healthy specimen that he collected in the Inland Lake area of Blount County. The 24” plant has been growing for two years in a nursery container.

It is number 24 of Alabama counties represented so far in the collection. When informed of this article, Smitherman appealed for help from readers who may have connections with native azalea experts or hobbyists in other counties in northeastern Alabama, which so far, are underrepresented in the collection. St. Clair, Marshall, DeKalb, Morgan, and Jackson come immediately to mind, Smitherman said.

This past winter, Smitty was diagnosed with ALS (Lou Gehrig’s Disease) which, unfortunately, has progressed rapidly, drastically affecting his speech, while leaving his thought processes undiminished. He communicates articulately and prodigiously by e-mail. Though he doesn’t say so in his optimistic and intensely focussed messages, there is the sense that he’s engaged in a stark race against time.