Haven’t we been here before? 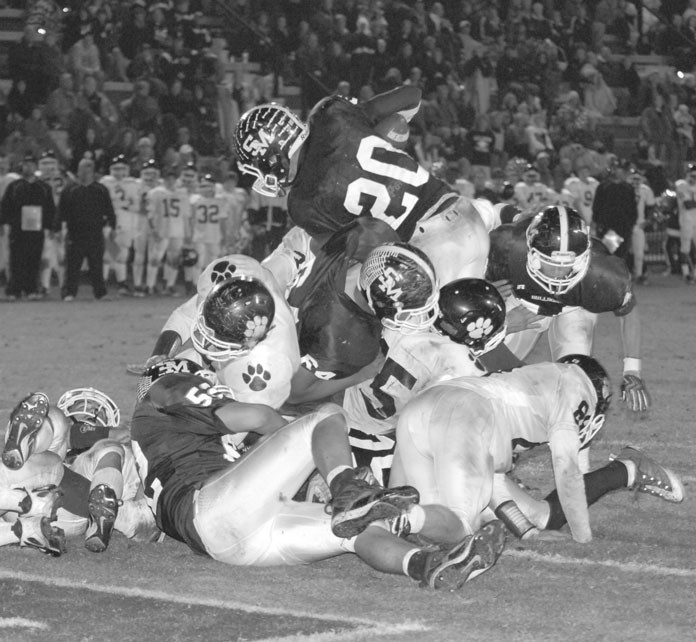 Deja vu, according to Webster’s New World College
Dictionary,
is defined as a feeling that one has been in a place or had a specific experience before. That sounds about right.

Just last year, in the second round of the high school football playoffs we were getting ready for Susan Moore to host Piedmont and for Cedar Bluff to pay a visit to Appalachian. Well, look what we have this week. Can you say rematch?

Remember – preferred or reserve seating is no longer available in the playoffs, so get there early, and admission is $8 for playoff games.

Cedar Bluff has been hit by injuries throughout the season but the Tigers have been able to play through them for the most part. The Tigers are solid defensive team with an offense that can be explosive. The Cedar Bluff offense is led by senior QB Kyle Crane (5’10, 170), who has completed 106 of 186 for 1746 yards and 24 touchdowns this year. He is a talented high school quarterback who simply makes plays. His favorite targets are Zach Taylor (5’5, 130 Jr), who has 33 receptions for 698 yards and five touchdowns, and Tyric Scales (6’2, 180 Jr), who has caught 28 passes for 332 yards and five touchdowns. Marcus Reese (5’11, 175 Jr) has grabbed 26 passes for 542 yards and leads the team with eight touchdown receptions. Hardy was on the receiving end of the 79-yard pass from Crane last week that proved to be the game-winner. The Tiger running game is effective, although it sometimes takes a back seat to the passing game. Nick Reed (6’0, 180 Sr) and Reese lead the Tigers with 458 and 420 yards, respectively. The Tiger offensive front is a good one. There is plenty of size (avg. 230 lbs.) across both fronts but depth has been a problem at times this year. The Cedar Bluff defense is solid, although Victory Christian’s balanced attack put up 482 yards on the Tigers last week. Jim Nelson (6’0, 210 Sr) is a rock in the middle of the Tiger defense at linebacker and is second on the team with 74 tackles. Reese, the safety, leads the team with 80 tackles. Kai Wen (5’10, 230 Sr) gives the team strength and size on the defensive front. The secondary has 10 interceptions – Scales leads with four and Reese has three – but Victory Christian only quit throwing when the clock ran out. Tiger special teams have made plays.

Appalachian did what it wanted to last week – bury Region 6’s No. 4 team. The challenge will be tougher this week. The Eagle passing game continues to get better and better and the Hill-to-Chappelle connection made yet another opponent pay for loading up to take away the run. Throwing for 215 yards and a pair of touchdowns will open up the running game and the Eagles will look to do the same this week. Cedar Bluff struggled stopping the pass last week – Victory Christian’s Will Kirby completed 16 of 34 passes for 289 yards with one touchdown – but this is an opportunistic group – Kirby was picked off three times. Appalachian will have to run the football and that means the Eagle offensive line must play physical against the Tiger defensive front and create some space for Dylan Schuman, Tonny Strickland, Zac Blythe and whoever else Ernie Willingham uses in the backfield this week. If Appalachian is able to run the ball effectively early, Scales and Reese will have to play closer to the line of scrimmage and that will open things up down the field for Hill. The Eagle defense will be tested. Cedar Bluff has moved the ball each week of the season. The Tiger passing numbers look a lot better than the rushing numbers – Crane led the team with 61 yards on 11 carries last week – but this is a Cedar Bluff offense that will take what the defense gives it. Sand Rock, Gaston, Spring Garden, and even Gaylesville were able to slow down the Tiger running game and get pressure on Crane. If Appalachian is able to control the line of scrimmage, the Eagles can make for a tough night for the Tigers on the Mountain. Appalachian special teams have been solid but gave up a cheap touchdown last week. That doesn’t need to happen again this week.

Next week – The winner will face either Berry or R.A.
Hubbard – Appalachian would host Hubbard but would
travel to Berry.

Steve Smith’s Bulldogs raced out to a 37-0 halftime lead last week against Pisgah and were never really challenged.

Piedmont is a team loaded with senior skill players. The Bulldogs have been able to move the ball at will because of the athletic ability of several playmakers. QB Chase Childers (5’10, 190 Sr) is the leader of an offense that can thrown but prefers to run. He has rushed for 843 yards and 13 touchdowns on 124 carries and has completed 57 of 111 passes for 871 yards and five touchdowns. Childers is solid but TB Christian Cantrell (5’11, 177 Sr) provides the flash and dash. He has the ability to score from anywhere on the field and has rushed for 1434 yards on 143 carries (10 yds. per carry!) with 14 touchdowns. Cantrell had touchdown runs of 30 and 23 yards last week against Pisgah while Childers led the team with 111 yards, including a 70-yard touchdown run. The Piedmont offensive and defensive lines are led by Johnathon Reedy (6’3, 264 Sr), a big, strong mauler who has already committed to Southern Mississippi. The Bulldog defense is a solid, aggressive bunch that thrives on big plays. Safety Jamaal Johnson (6’1, 191 Jr) and linebacker Jamie Major (6’0, 188 Fr) lead the team with 90 tackles each but this is a group effort on this side of the ball. Senior defensive ends Luke Smith (6’2, 195) and Terick Spear (6’4, 216) has been hard to block and teams with Marquez Gamble (5’10, 210 So) to give the Bulldogs an effective defensive front. Mickey Jackson (6’0, 295 Jr) provides the anchor in the middle. Cantrell is a nightmare to cover on any type of return and Piedmont special teams have been very solid this season.

Susan Moore got run over in the first half last week by Walter Wellborn’s Delrickus Rhoden but came back in the second half to shut down the Panthers’ talented running back and end any hopes of an upset. A similar start this week will probably mean the end of the season. Maybe it was an adjustment – either in scheme or attitude – but whatever it was that Bubba Jennings and his staff did at halftime last week needs to be done in pregame Friday night. Susan Moore’s offense had a big night. No, this wasn’t a Pod Patterson offense running out of the Power-I but the Bulldogs pounded out better than 500 yards on the ground. Piedmont has been hard to run on but the Bulldogs will need to run again this week to open up the pass. Justin Hawkins will need the running game of Blake Weaver and John Evatt to be effective running behind the offensive line of Aaron Allcorn, Tyler Steele, Cody Steele, Colton Bicknell, and Manuel Emery. If Susan Moore can run (500 won’t be needed but 150 or so would be nice) then the Hawkins will be able to find Joshia Witt, Cody Sanders, and Jose Diaz down the field. Plus, if the base running game is working, Piedmont will be forced to play man-to-man and that may open up the designed runs and scrambles for Hawkins. The Susan Moore defense will face perhaps the strongest offense it has seen this year. Piedmont can throw the football but only Cherokee County and Leeds have been able to effectively control the Bulldog running game (the Tarrant game was played in a monsoon). Susan Moore must keep Cantrell in check and that means tackling him early and keeping him out of the open field. Childers is too good to shut down but the Bulldogs must be disciplined across the front with the pass rush and not give him any lanes to run through. Piedmont has to run the football and Susan Moore has to stop the run – it’s that simple. Bulldog special teams have been solid but need to be even better this week.

Next week – the winner faces either Elkmont or
Hamilton. Susan Moore would travel regardless of the
winner.