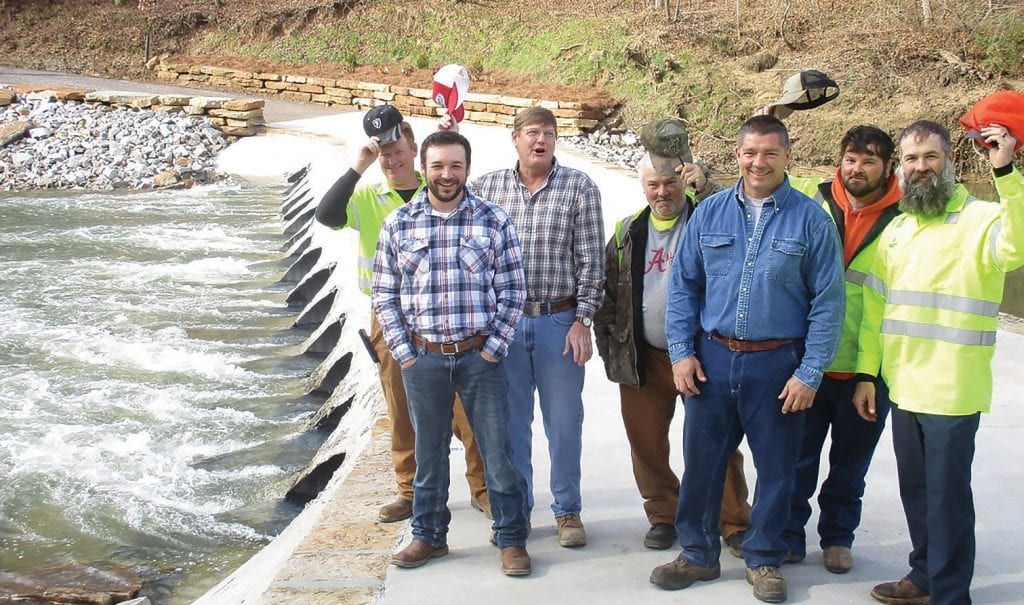 Don’t dare call it Low-Water Bridge or you’ll have the semantically-correct police after you. And they’ll nail you dead to rights. The shiny new structure you see here is NOT a bridge. It’s a CROSSING, on the say-so of no less an authority than ALDOT (Alabama Department of Transportation) and all its minions. A bridge is an elevated structure carrying a road, path, railroad, etc. across a stream, another road, holler (ravine), or other obstacle. That’s kind of a stuffy definition. A more common-sense distinction: A bridge isn’t intended to go under water, (though some occasionally do). The structure you see here is not elevated, and it is designed to go under water. And it will go under water fairly frequently during the winter and spring or anytime the weather gods visit the area with a flooding rain. It may remain submerged for days at a time during the rainy season. But it won’t go under quite as often or quite as long as it used to, according to District 4 Commissioner Nick Washburn. (When it’s under, the gates leading to the bridge will be closed and locked, so you won’t even be tempted to try something that could be fatally dangerous.) The bridge

When they rebuilt this structure following closure for safety reasons two years ago, Washburn said, they made it wider, stronger, and better than ever before. Couple of examples. First, the road surface is about three feet higher above the river (not technically elevated, since it’s resting on the river bottom.) Second, the old structure was fill, masonry, and concrete only. The new structure is fortified with steel rebar. Also, the old structure used 30”- diameter jointed concrete pipes under the roadway to carry the normal flow of the river. The new one uses 15 36”- diameter heavy-duty plastic pipes – each a continuous run with no joints, therefore no leakage, and no differential settling of sections of pipe, thus undermining the integrity of the roadway. And it carries significantly more water as well. For good measure, they rip-rapped the banks on both sides of the crossing, which were dangerously washed out, adding some decorative touches in the form of native stone masonry along the margins of the road crossing and the stone planter visible in the backgound, as well. (It’s planted with Snow Queen-related hydrangeas, a cultivated variety of the native species that clothes many Blount County wooded hillsides, provided by Doug Hill of nearby Blackwood Crossing Nursery.) Last detail: the margins of the road crossing above the river are liberally lined with reflectors. That’s major for night driving. There are no guard rails. (They would cause a massive beaverdam type pileup of debris when the river flows over the road, eventually destroying the guard rails themselves.) Also, no weight limit. Salute

We interrupt this recitation of the wonders of the crossing to recognize the guys who did the hardest part of the work – the District 4 road crew, the same Blount County workers who keep District 4 county roads and rights-of-way maintained and in good order year in and year out. Collectively they spent about a month and a half of their time spread over the period July to December this year rebuilding the structure, including diverting the river twice to rebuild half of it at a time: a worthy piece of work. Salute them, next chance you get. Context

Now, as to the magnitude of their accomplishment. Rebuilding the river crossing with an honest-to-goodness clear span bridge would have been 100 yards long with approaches and would have cost $2.5 to $3 million. Low-Water Crossing is less than 100 feet long and cost $145,000. Whether that saved $2.4 to $2.9 million is kinda academic, since that amount of money was not to be had, even in Blount County’s fondest dreams. Too many other roads and bridges to repair. But it sure was efficient and effective use of taxpayers’ money – and the county’s road maintenance budget. Overall perspective

“This was a big project and an important one because it reunites the communities on the Nectar and Locust Fork sides of the river,” Washburn said. “It restores the convenience of not having to make a several- mile detour to get across the river for residents in the area, and it contributes to public safety by providing faster access to fire, ambulance, and law enforcement first responders to the immediate area on each side of the river. We’re delighted to reopen the crossing and get it back in service,” he said.