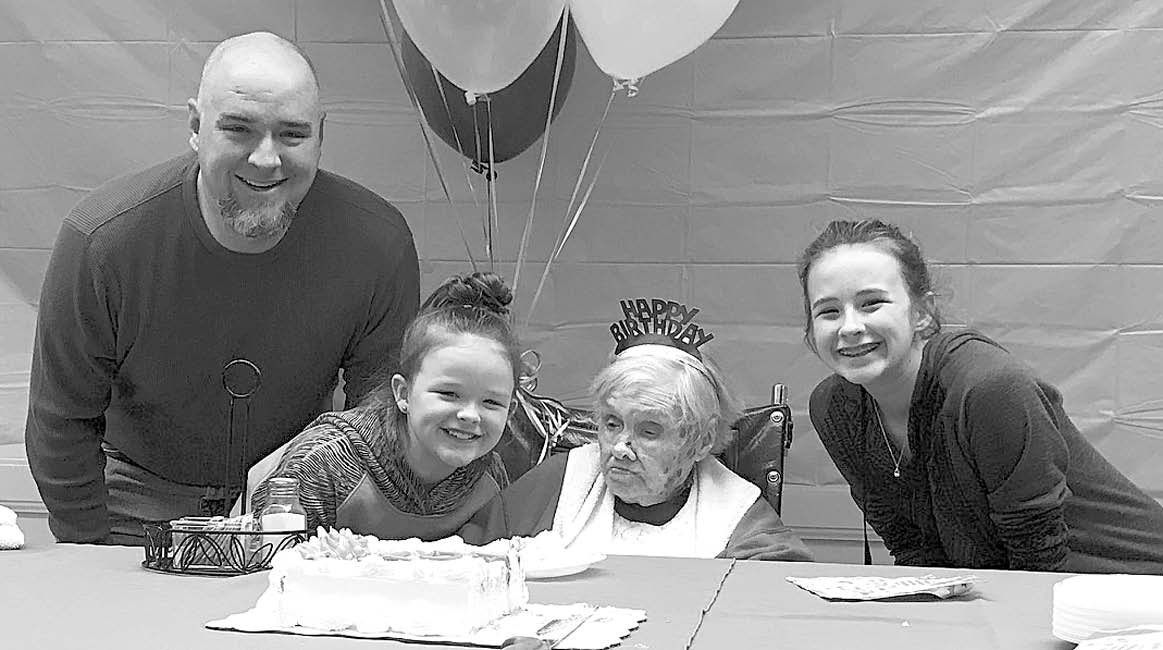 Alice Hall turned 107 Monday. Residents gathered for the birthday party held for her at Diversicare, formerly Golden Living Center. Attending to help her celebrate, from the left above, were her grandson Brett Hall, and her two great-granddaughters, Emory and Ella.

Alice Hall was born in Palmerdale in 1910. She lived much of her life in Tarrant, where she resided alone until she was 96, following the death of her husband several years earlier. For many of those years, beginning on the cusp of the Great Depression, she was a housewife, who quickly learned to make every penny count to make ends meet. She occasionally took in washing and ironing during those years to supplement the family budget, and began a lifelong commitment to canning garden vegetables and fruit preserves as well as baking for family and friends.

She had two children who died shortly after birth. Her surviving son Joe lives in Pinson. When he started to school, she ventured beyond the role of homemaker, substituting for a time as a cafeteria worker while he was in school at Boyles Elementary School. Though she was too sleepy to speak at her birthday party, son Joe said one her earliest memories she spoke of to him was of an event near the end of World War I. Her older brother was on a troop transport ship on the way to Europe to fight when the war ended in 1918. He returned home without seeing action in ‘the war to end all wars.’

Besides her son, Alice has two grandsons, two great-granddaughters, and three great-grandsons. She lived with her son and his wife for eight years in Pinson, after giving up her Tarrant residence and before moving into the Golden Living Center in 2014.