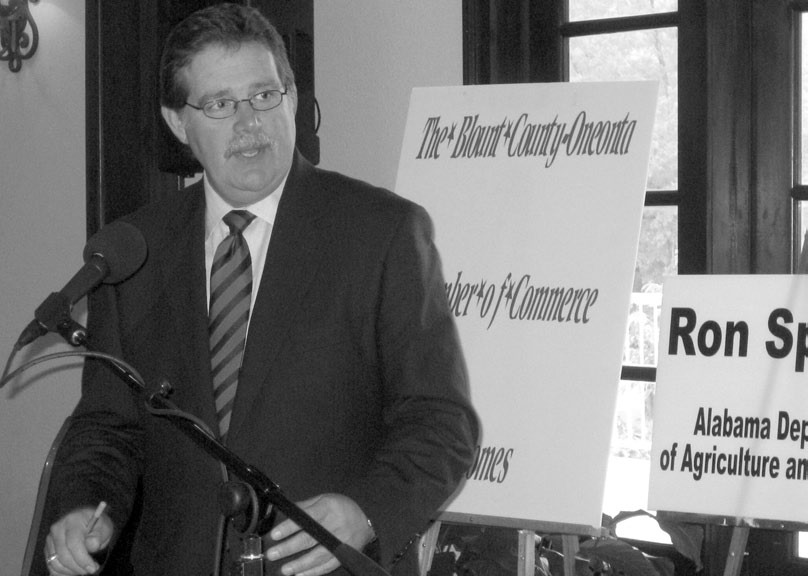 Commissioner of state Department of Agriculture and Industries Ron Sparks: onehalf million diagnosed diabetes cases, plus an estimated 200,000 more undiagnosed cases – and 10 percent of both categories are children. It’s a health problem, and an agriculture problem, Sparks says, because the solution is a proper diet, in which vegetables play an important role.

To be a candidate for Alabama’s next governor, Commissioner of Agriculture and Industries Ron Sparks gave an unusually subtle speech to chamber members and guests attending the monthly breakfast meeting at Twin Oaks last week. He didn’t specifically mention his candidacy during the speech, although he summarized his accomplishments as agriculture commissioner, emphasizing the importance of agriculture to the state’s economy and identifying several issues in the speech that may later undergird his campaign. Sparks is one of two Democrats who have so far announced their candidacy for governor in 2010.


In describing the importance of agriculture to the state’s economy with 467,000 ag jobs constituting 21 percent of the workforce, Sparks said that as he travels through airports around the world he often sees American military personnel in terminals, awaiting flights into or out of the country. He said he often goes over, introduces himself, and thanks them for the service they provide to their country.

“We all need to do that very same thing to thank our Alabama farmers for producing the safest food supply in the world,” Sparks said. He pointed out that his agriculture department serves as a de facto consumer protection agency for the state with respect to the food supply by developing and enforcing the standards necessary to ensure its safety. He said Americans deserve to know where all food products are coming from, pointing out that all manufactured products are labeled as to country of origin.

“You know where your tie, your VCR, your dog food, your toothpaste comes from, why not the food you eat?” he asked. “And while we’re at it, we need to tell those other countries that if they can’t produce it to the same standards we require of our farmers, we don’t want it,” he said. Noting that he opposed the Central American Free Trade Agreement when it was passed several years ago, Sparks said the country must stop sending jobs to other countries overseas. He said when he was growing up in Fort Payne, the sock industry employed 6000 workers in the county. Now, only 1500 of those jobs remain.

“Some of those jobs would sure look good in our struggling counties in this state,” Sparks said. He noted that 35 counties in the state currently have double-digit unemployment.

Observing that Alabama leads the nation in obesity, heart attacks and diabetes, Sparks noted that his department has led the successful effort to remove sugar-laced drinks from school vending machines around the state. He said the department has initiated a program of using fresh Alabama-grown produce such as peaches, potatoes, and tomatoes in school cafeterias statewide. He also noted the lack of rigorous physical education requirements in school curricula.

Sparks said there are more Englishspeaking people in China and India than in any other country today. “Our children are competing against China and India. We must educate them to compete in the technological age of the 21st century, or they’ll be left behind,” he said.

He said too many children in our educational system are failing to enter the economy as productive workers, migrating instead “from schoolhouse to courthouse to jailhouse” because of lack of academic interest and performance.

What was his feeling about bailing out the state Prepaid Affordable College Tuition program (PACT)? “If you paid for it, you oughta get it,” he said. He qualified the answer by adding if the contract purchased specified that it was guaranteed by the state of Alabama, it should be honored. Contracts in the early years of the program contained that language; those issued after the mid-90s did not.

Would he support a state bond issue to aid rural counties in maintaining local roads that have deteriorated steadily in recent years? “If that becomes a priority with counties and with county commissioners, I’ll certainly consider it,” he responded, adding that he had been a county commissioner himself and understood that it was a matter of concern.