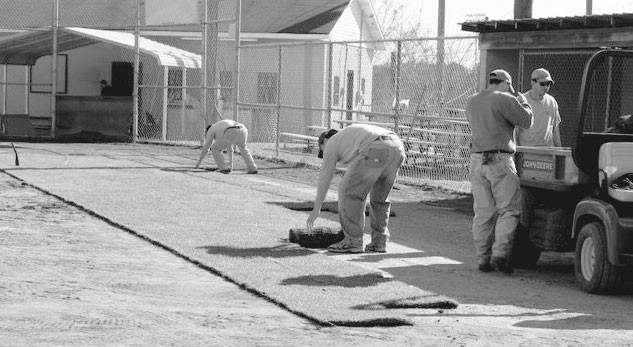 Volunteers roll out sod as part of the renovations at West Blount Park.

The sky was cloudless and temperatures were warm on Friday afternoon, perfect conditions for a ballgame. Though little leaguers didn’t play, the next best thing happened: three big league-quality fields were born. The grass is green and the fields beg baseball fans to come and say hello.


West Blount Park’s baseball fields have been transformed into a “field of dreams” by a grant Kellogg’s Frosted Flakes Field Renovation Program awarded back in July. Kellogg’s created this initiative to provide children with the “opportunity to stay active and be their very best by giving them better places to play.”

Kellogg’s invested $15,000 in the project and chose Warner’s Athletic Construction Company, with the assistance of Brickman Landscaping/Sports Turf Division, to lead the renovation project to create safe and playable fields for the children of the community.

The project began last Wednesday when Lou Warner and two members of his staff provided professional support to West Blount Park including equipment, materials, manpower, knowledge, and expertise. Warner also worked closely with the park board to make the generous donation from Kelloggs stretch even further.

“Mr. Warner has provided extra services at no extra cost, which are above and beyond his original quote,” said Brad Thompson, park board member. “We are very pleased with the work of Warner’s Athletics and are very excited to see the field improvements.”

Renovations to the fields included infield and outfield maintenance leveling problem areas, by extending back radius to the proper dimension and enlarging the infield to make square. New sod was applied to the infields, along with application of new infield clay and conditioners.

Warner’s Athletic Construction Company, located in Smyrna, Tenn., has completed projects for major fields and stadiums in the U.S. including the Houston Astros, the SEC, and minor league baseball teams. According to Warner, improving the ballfields for the children is the most rewarding.

“It’s a great honor to be able to improve the fields for the children of this community,” said Lou Warner, owner of Warner’s Athletic Construction Company. “These improvements were much needed,” he said. “This is a makeover they’ll all be proud of.”

West Blount Park was selected from among 1000 fields across the nation to receive up to $15,000 in restoration work in the Kellogg’s Frosted Flakes Field Renovation Program. The entry into the competition was a grassroots effort by the west Blount community. West Blount Park’s fields were among the 55 youth athletic fields in the nation to be renovated. From thousands of applications, the 100 semifinalist fields were chosen based on feasibility of the field makeover and several other factors. From the semifinalists, 30 winning fields were determined by online voting and Kellogg’s review panel. Twenty-five additional fields were selected based on community need.