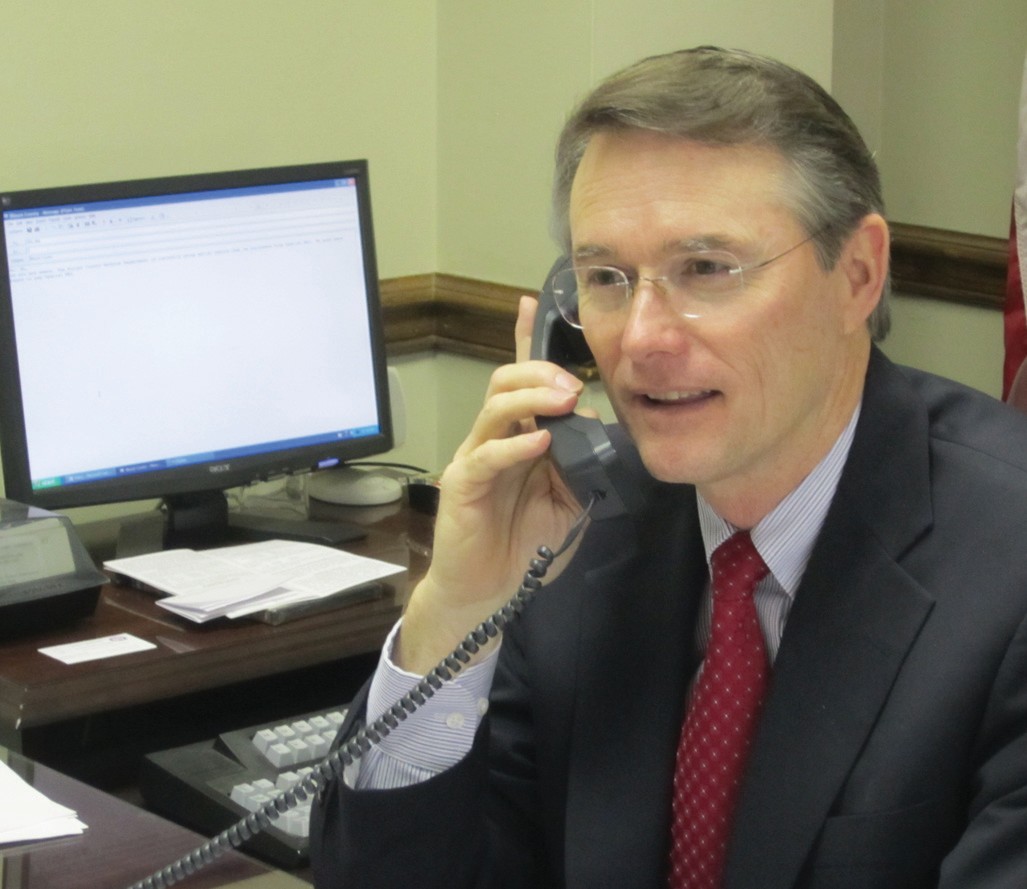 Like his father before him. If he continues unopposed for the job of probate judge/ commission chairman of Blount County, Chris Green will follow in his father Frank Green’s footsteps from a generation ago.

Chris Green, 52, current Blount County Revenue Commissioner and son of former Probate Judge and Commiss-ion Chairman Frank Green (1977-1995), is the sole Republican candidate for the dual job, which serves as the chief executive officer for the county. No Democrats qualified for the primary election, meaning Green will face no opposition in the primary or general election, unless someone were to qualify before the date of the March 13 primary to run against him as a minor party or independent candidate in the general election in November. Personal profile: Green was born in 1959, the eldest of three children, at the Gordon and Patton hospital in Oneonta. He has never resided outside Blount County, growing up in the Royal community, where he now lives. He graduated in 1977 from J.B. Pennington High School. In 1997, he earned an associate degree in music education from Wallace State Community College. He has served as minister of music at local churches for several years, serving currently in that capacity at Cleveland First Baptist.

He has been married for 31 years to Pam Hunt Green, and the Greens have two children: Hannah Maze, a firstgrade teacher at Susan Moore, and Mary Grace Hicks, a seventh-grade teacher at Hayden Middle School.

Work background Green spent the early years of his career as a full time cattle and poultry farmer, raising his family on a farm in the Nectar community. In 2001, he went to work as county administrator in the administration of Probate Judge/ Commission Chairman Royce King. In 2003, he earned the distinction of certified county administrator, conferred after three years’ experience and a program of coursework taken through Troy University and Jacksonville State University. He served a total of almost nine years as county administrator. In November 2008, he was elected to the position of Blount County Revenue Commissioner, succeeding Donny Ray, and taking office on Oct. 1, 2009. He will serve in that job until January of 2013, if unopposed in November.

Duties of position of probate judge/commission chairman The job is unusual in that it consists of two important but separate functions. In a majority of Alabama counties, it is actually broken into separate jobs performed by different officials. In a small number of counties, it is still combined as it is in Blount. Green identified the main components of each part of the job as shown below. He said he thinks time requirements for the two parts of the job will break out into about a 50/50 split.

Probate judge •oversees recording of official documents, such as deeds, which become permanent records. •administers sale of business licenses. •oversees driver’s license renewals. •administers probation of wills, adoption of children, commitment in cases of mental illness, and performs marriages. •responsible with assistance of sheriff’s department and others for preparing and holding elections in the county.

•“A major challenge as I see it is to assist the county commission in the age-old problem of how to maintain over 1100 miles of county road. Current revenues are in no way sufficient to maintain the roads – especially the farm-to-market roads – at an acceptable level. I want to see what additional funding can be found from state and federal government sources.”

•“I want to work with the chamber of commerce to bring environmentally clean industry to the area, and seek to provide additional retail opportunities to the people of Blount County so they don’t have to leave the county to meet their needs. That would also help us keep tax money here in the county to provide for county schools and roads.”

•“I’d like to work to expand tourism in the county, including promoting the covered bridges, the Locust Fork River, and Palisades Park.”

•“I would like this job because my greatest pleasure and my life ambition is to be a public servant – to be able to help people meet their needs. There’s no place in the courthouse I can do that better than in this job. It will allow me to work hands-on to achieve goals. As county administrator, I could do that to an extent, but your hands are somewhat tied. I have always wanted to see if we couldn’t bring more state and federal resources to bear on county needs. I look forward to working with our county delegation in Montgomery and our state delegation in Washington to try to do that.”

Candidate’s statement to voters “I look forward to the opportunity of serving the people of Blount County as their probate judge/commission chairman. My experience as county administrator and revenue commissioner has uniquely prepared me to assist our county commissioners in providing leadership during these tough economic times. I will work with our county commission to bring every available dollar from Montgomery and Washington D.C. to help meet the needs of our people. As probate judge, it will be a privilege to help our citizens with needs that are very personal to them, such as adoptions, dealing with mental health issues, and probating wills. Honoring God, loving my family, and serving the citizens of Blount County are the passions of my life. I sincerely appreciate your prayers and your support.”