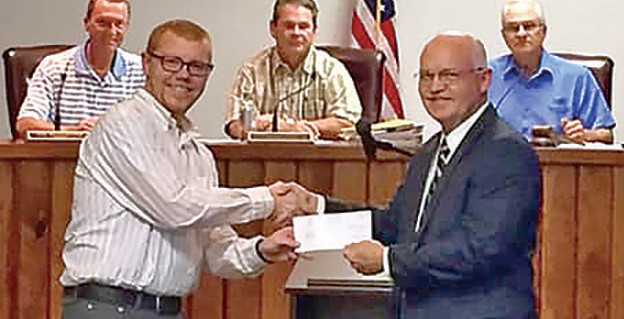 State representative David Standridge announced a legislative grant to the Oneonta Public Library at the latest Oneonta City Council meeting. Library personnel may decide how best to use the $1,000 award.

In the session, councilors approved a resolution committing the city to funding its share of any grant sought for the city’s Robbins field during the 2019 fiscal year. Members also voted to hire Lori McCoy as the police UCR (Uniform Crime Reporting) clerk and department secretary.

Lowe also announced expansion of the local welding instruction and state approval for Wallace-Oneonta as its sixth location for machine shop instruction. He anticipates the latter program will begin mid-summer of 2019.

The council set a public hearing for 5:15 p.m. prior to its Oct. 23 next regular session to consider a liquor license application by Grapes and Hops. Councilmen Richard Phillips and Danny Robinson missed the Oct. 9 meeting, all other members (Mayor Ross Norris and councilors Hal Blackwood, Nathaniel Butler, and Tonya Rogers) attended. The council holds its regular sessions the second and fourth Tuesdays of each month at 5:30 p.m. in city hall.