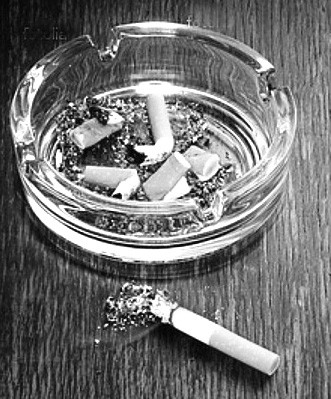 First, this is not a story to tell you all the evils of smoking — you have already heard most of them. “If you don’t stop today, tomorrow will be your last.” One medical doctor even told a patient his toenail fungus would never clear up if he continued to smoke. “If you don’t quit smoking, all of your children will be born naked,” and other such attempts will be made to insult your intelligence.


In reality, some of their theories are probably true, but repeatedly hounding you about smoking will usually backfire. As you walk out, you will think,“You are out every weekend wasting heartbeats chasing a little ball into a hole. I’ll probably outlive you because my daddy smoked until he was 90.”

You may be right, but actually, the odds are against you. Daddy lived to a ripe old age because he worked harder than some of us can imagine while breathing clean air filtered by God’s greenery. A few laps around the pool, or twenty minutes on a Stairmaster would just about equal him chopping a load of wood for the wife to cook breakfast.

Most medical professionals are brilliant and well schooled in their field. We seem to be returning to a long ago time when doctors and nurses were genuinely compassionate toward their patients. Lately, many are saying, “I realize what a demon you are wrestling with. I am sorry for you and I want to make you well.” But, none have come up with an easy way to quit.

We all have acquaintances though, who consider you weak, ignorant, and/or stubborn. “Forgive them, they know not what they do.” They can parrot what the talking heads in Follywood says, but not one of them can tell you a way to break the habit.

Smoking may be the most prevalent carcinogenic culprit. However, there is a long list of other things we do that contaminates our bodies with cancerous cells.

A carcinogen is any substance that is known or believed to cause cancer in humans. They include:

*Some viral and bacterial infections, and even some microscopic parasites.

*Chemicals and byproducts prevalent in some industries.

*Radiation from sunlight, and ultraviolet radiation.

But good solid research has determined that the most preventable cause of cancer, COPD, and other pulmonary ailments is the use of tobacco products.

So, how did we get locked into this path of destruction?

Perhaps today’s youngsters are inherently rebellious to a point of wearing skanky hair, ragged clothes, and puffing a Marlboro to irritate their parents. Perhaps we older generations did that to some degree, but that was before a 12-year-old could sue his parents for attacking his or her self esteem with a razor strop.

Those of us who were adolescents and teenagers during and after World War II tended to identify with pictures we saw of a hotshot fighter pilot lighting up a Camel after a successful raid. We saw the swaggering James Dean in “Rebel Without a Cause” with a Tareyton (or whatever) dangling from his lips. And of course, there was the 10-feet-tall and bulletproof Humphrey Bogart lighting up in almost every scene of his movies.

Why is it so hard to quit?

Most are coming to realize that smoking is no longer “cool” or “macho.” We are aware that it annoys or even sickens others around us. It is not that we have some covert death wish; it simply is as one physician put it, “a darned good nerve medicine.”

As if that were not enough, cigarette companies started revving up the effect of nicotine by adding an unnoticeable amount of sugar. They learned that when sugar is burned, it produces a chemical called acetaldehyde, and teams up well with nicotine to make it even more addictive.

Another strike against the smoker is a thing called free-based nicotine. It is a mutation of the ordinary nicotine molecular structure where a hydrogen ion is missing. This allows nicotine to vaporize faster and therefore, reach the brain faster. The faster a drug reaches the brain, the more addictive it can be. Free-base nicotine is to smokers what crack is to cocaine addicts. Nicotine is big time, the hard stuff. It has been classified the second hardest addiction to overcome, coming in just under crystal meth.

So, tell me how to quit

Although far from being easy, it is not impossible. Most “as seen on TV” products have little or no effect, so one should work with a health professional if possible. “Cold turkey” quitters do exist, but they are few and far between.

1) You will need a concrete reason to quit. Doctors have been suggesting their patients quit smoking for years to little or no avail. For some it may be a health crisis, for others it could be a threat to their career. One has to be left with little or no choice.

2) Trust your doctor and be totally honest with him or her about your habit. If you smoke three packs a day, admit it. If you frequently have coughing spells or shortness of breath, say so. A large percentage of the doctor’s diagnosis is based on what you tell him.

3) If your doctor prescribes a cessation aid such as Chantix®, follow the directions to the letter. Most such medications require eating before taking it. That is very important because most smokers will be nauseated if they take it on an empty stomach and will therefore stop using it.

4) Completely rid your home, car, and work area of tobacco products. What happens when you as a smoker run out of cigarettes? You don’t smoke until you buy or bum one. So, not having them accessible allows you to focus on other things.

5) Bite the bullet. Think to yourself, “I want to smoke right now more than I have ever wanted anything else, but I am stronger than any habit.” Know you can do it.

6) Remember, your choice to quit is your choice. It is your life change, your battle, and not someone else’s.

What if I “backslide”?

If you are successful at quitting, you are a hero; you have slain a dragon. It is, however, common to make several serious attempts to quit before you are successful. Not smoking, and not wanting to smoke are two altogether different hills to climb. You may never smoke again, but you may always want to.

By all means, do not beat yourself up if you fail the first few attempts at quitting. During each smoke-free episode, you will learn what activities or situations are hardest to resist lighting up. On your next attempt, you will remember and try to avoid them.

Some will say, “If you stop smoking, food will taste better, you will sleep better, and you will have more friends.” Don’t bet on it. They are usually those who have never been addicted to any substance worse than chocolate.

Other good things will happen though. You will have more money and overall better health. As for friends, those who will only like you if you don’t smoke – you don’t need them. You need the kind who admire you for trying – and mean it. You need those who encourage you to try again and will be there if you fall again.