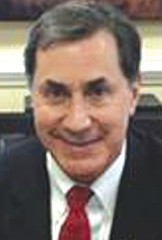 Born in/resides in: Born in Haleyville; resides in Hoover

No answer provided. (See statement to voters) State your qualifications for office

State you platform priorities
•replace Obamacare with a plan that
will cost less than a fourth of what the
Affordable Care Act will cost and provides affordable, sensible coverage to
everyone who wants it
•take advantage of U.S. energy
resources in order to stimulate the economy and get it growing again
•implement tax reform – eliminate
existing progressive rate system and
replace with either a flat tax or consumption tax; cut capital gains taxes; lower or
eliminate corporate income taxes

If there was one issue you would want associated with your candidacy above all others, what would it be?

“Jump-starting the American economy and getting millions of people back in good-paying jobs.” Candidate’s statement to voters

“I’m running for Congress because I’m concerned about the future of our country. Our nation’s debt is the logical result of government that has become something unrecognizable to America’s founders. We must repeal Obamacare and replace it with healthcare reform that recognizes individual freedom and allows people to keep their doctor. I’m running for Congress because there has never been a time in the history of our country where good people with the right ideas are needed more. We need someone in Washington who understands that more government is not the answer. More government is less freedom. More government is less opportunity.”