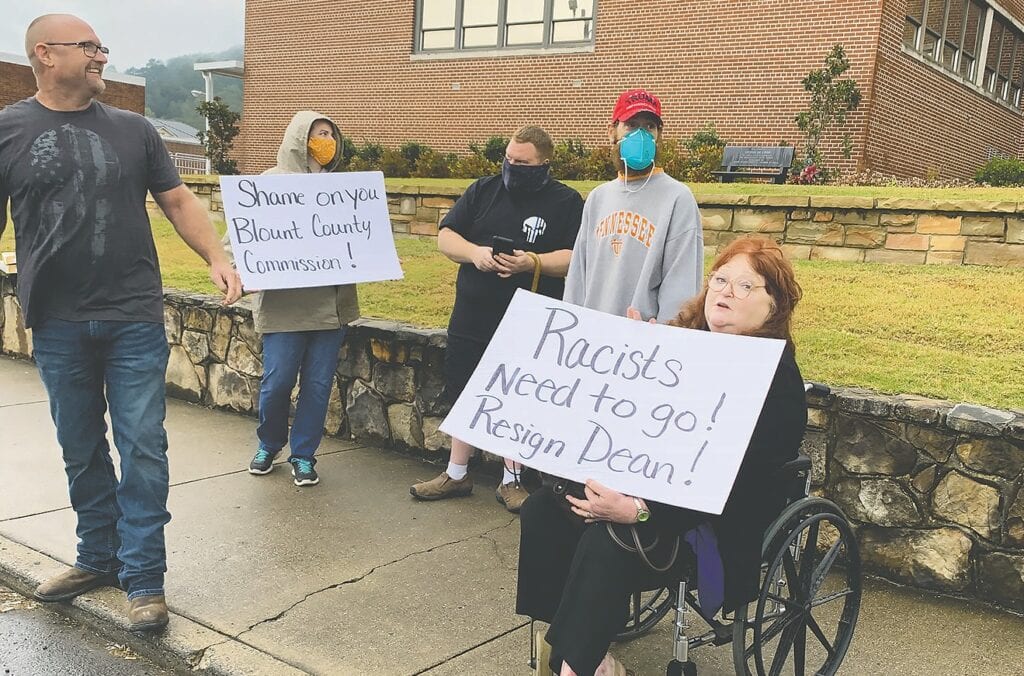 If you were headed into the courthouse last Thursday morning, you were greeted by a small group of protesters (pictured above) equipped with hand-written signs demanding the resignation of District 3 Commissioner Dean Calvert, whose absence from the meeting was not addressed, for his use of a racial slur, multiple sexist and misogynistic remarks, and sexual references.

The protest coincided with the special called meeting of the Blount County Commission, which was set for the purpose of approving the county’s 2020-2021 fiscal year budget. The budget, however, was overshadowed by news of the Birmingham Water Works Board’s decision to sever ties with the Blount County Sheriff’s Department for the use of its deputies to provide 24-hour protection of Inland Lake. Although Blount County Sheriff Mark Moon immediately and publicly denounced Calvert and the statements caught on tape, his deputies are the ones paying the price.

One of the protesters, Brandon Gallups, explained the group’s purpose: “Obviously some people got together on Facebook and just requested people to come out this morning to state their displeasure after the decision yesterday for Birmingham Water Works to pull the contract from the sheriff’s department. We feel like this could have been avoided if Mr. Calvert had just stepped down.”

Another protest of sorts was brewing in the commission meeting after commissioner Mike Painter requested that discussion of the commission’s use of Facebook live be added to the agenda.

In particular, Painter and fellow commissioner Nick Washburn said they were concerned with the negative comments being posted on both the live feed and archived meeting videos. Painter emphatically stated, “We’ve created a monster,” in regards to the multitude of comments condemning Calvert and the commission as a whole.Painter did make it clear that he was “all for transparency,” but that he was “tired of the mob hate mentality.”

Moon spoke on behalf of his deputies sharing their devastation from the loss of the BWWB.He said that the loss will drastically cut the salaries of his deputies resulting in substantial hardships for each of them and their families as they struggle to find ways to offset the loss of around $1,400 a month.

He also explained that losing the contract will impede recruitment of deputies in the future. Moon said, “In this day and age I need the most professional deputies I can get. The Inland Lake shifts were a way to encourage people to apply for a position with the Blount County Sheriff’s Department.”

As in previous meetings over the past few weeks, no one offered any solutions to save the jobs of the Blount County Sheriff’s deputies or how to help a county fractured by Calvert’s comments begin to heal.

Finally, about an hour into the meeting, the commission began its deliberation on next year’s budget. Probate judge and county commission chairman Chris Green described the budget as “the most difficult task of the commission.” Before the commission approved the budget, Green revisited the issue of funding the Blount County-Oneonta Chamber and the West Blount Chamber that had been discussed in the previous work session. (See budget sidebar at right.)

The commission also used the special called meeting to appoint Gareth Price to the Palisades Park Board for District 2, as well as approve a transfer in the amount of $15,769.62 from the CRAF fund for District 3’s County Road 42 project and the purchase of Asset 3658 Truck from Engineering Department by Fund 104 in the amount of $2,000.

After much discussion on the comments that citizens post on the live feed of commission meetings, the Commission tabled the matter and will address it again at their next meeting. The work session is planned for Thursday, Oct. 15, with the business meeting to follow on Monday, Oct. 19. Both meetings begin at 9 a.m.