From tips to the top 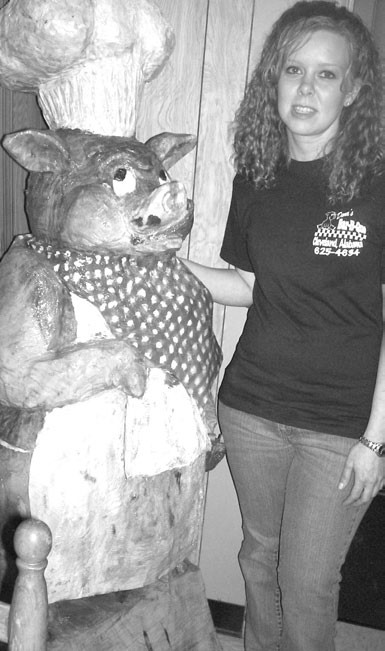 Who says a new business can’t succeed in a poor economy? A young woman in Cleveland with a dream, the American entrepreneurial spirit, and an old-fashioned work ethic is proving that it can.

Dana Blythe graduated from Susan Moore High School with a dream of going to culinary school and one day owning her own restaurant. She immediately went to work. Dana’s first job was at Al & Mick’s BBQ in Snead. From there, she moved to the Walmart bakery in Oneonta, where she further honed her cooking skills. Staying with food service, Dana went to the Cleveland Chevron, where she cooked breakfast for five years.

Wayne’s Barbeque afforded Dana her next cooking experience. After she worked there for five years, the restaurant closed, and for the first time, she took a short break from food service and worked briefly at Hometown Bank. “I hadn’t been there long at all,” says Dana, “when I got an offer to start my own business in the former location of Wayne’s Barbeque. I didn’t even have to think about it. I knew that if I could pull it off, this was exactly what I wanted to do.”

Dana’s Barbeque officially opened Nov. 18, 2009, and a dream had come true. A sign out front reads “Dana’s Barbeque” with a message board underneath. The sign is visible for a good distance in both directions on the west side of Ala 79, just north of the 160 intersection. Inside, one sees a unique decor, including Dana’s hand-painted signs, a chainsaw-carved “Heisman Trophy,” and a facsimile of “Aubie.” The latest addition to the atmosphere is a 5.5-foot-tall chainsaw-carved “chef-pig,” which stands in the corner of the restaurant near the restrooms.

“A few weeks ago, Brad Martin stopped in a truck loaded with his chainsaw carvings,” said Dana. “He had a nine-foot-tall pig dressed as a cook. I told Brad that I would love to have the pig, but that my budget couldn’t be stretched to include it just now. I did buy the Heisman Trophy and the Aubie that day, and I told him that if he had a pig about half that size, I might be able to afford it. Well, about a week later, back came Brad with the perfect pig for my restaurant.”

Dana bought the pig, which is very popular with diners, especially the young ones.

“My patrons are constantly complimenting me on the pig. They say that it makes this place uniquely ‘Dana’s.’”

The pig is wearing an apron, a chef’s hat, and a red plaid napkin around his neck. He is licking his chops, his eyes are rolled upward, and telltale spots of sauce surround his mouth, as he tries to discreetly hide a barbequed rib in his left “hand.”

Dana’s creative decor, friendly and professional staff, and excellent food have made her restaurant a popular dining location in Blount County.

“We still have most of the patrons that we used to serve when I worked for Wayne’s,” said Dana, “and about half of our employees also worked here back then. Everyone just jumped right in and went to work. I am very pleased at how well we all work together, and our patrons are wonderful.”

It is obvious the employees enjoy their work and enjoy working with Dana. The atmosphere in Dana’s Barbeque is very conducive to pleasant dining. The menu includes hickory-smoked barbeque butts, ribs, and chicken, and old-fashioned hamburgers.

“You wouldn’t believe it, but we sell a ton of hamburgers at this barbeque restaurant,” asserted Dana. “People love our hamburgers!”

Other popular items are homemade onion rings and homemade fried pies. You may pick up called-in orders at the drivein window without leaving your car.

Hard times or not, Dana’s Barbeque has proven that with a dream and a will, hard work and dedication, a goal can be reached. Dana praises her parents and her daughter, Taylor, for all the moral support they have given her.

“My family and friends have been very supportive,” says Dana. “I couldn’t make it without them.”

For more information about Dana’s, or to call in an order, the number is (205) 625-4634. To view more of Brad Martin’s work, visit his website at libertychain sawcarvings.com.