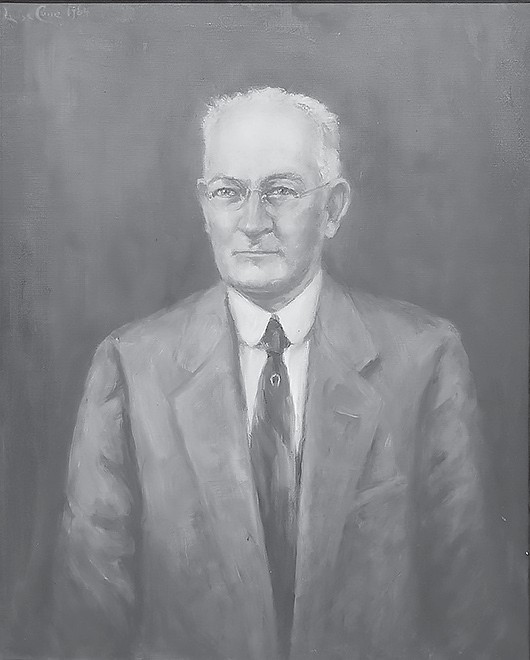 As a fitting climax to this year’s celebration of the Democrat’s 70th anniversary last October, a handsome oil painting of its founder, the late Forney Gilmore Stephens, has been hung in the office of the building he so proudly erected for his paper.

Painstakingly created by Mrs. Louise Cone, well-known Birmingham artist, the painting is a striking likeness of Mr. Stephens and will recall to the older generation of the county his sterling character and many fine attributes.

It is with pride that the present owners of the paper pay this tribute to our first editor.

Ed. note: The painting (above) is still in the newspaper office. The Blount Countian (formerly The Southern Democrat) will soon begin publication of Volume 129.

Bankers: ‘Turn in coins; use checks’

Blount County is in the middle of a severe nationwide coin shortage. Banks all over the county are finding it hard, if not impossible, to supply their customers with enough coins to carry on day-to-day business. Halves are non-existent and quarters are almost gone.

Although the Federal Reserve is working with the U.S. Mint to replenish the supply, new coins will not be circulated until the first of the year and the country will have to conduct the tremendous business of the Christmas season with what coins can be raked and scraped together.

There seem to be only two solutions to the problem for Oneonta and the Blount County area: for people to stop holding coins not used in ordinary daily business and turn them in to the banks, and to make full use of checking accounts for paying bills since writing checks for the exact amount of payments do not necessitate use of coins.

The banks and bankers in Blount County are doing everything within their power to provide coins for merchants and other business people, and they urge everyone to help by turning in excess coins and using checks instead of cash whenever possible.