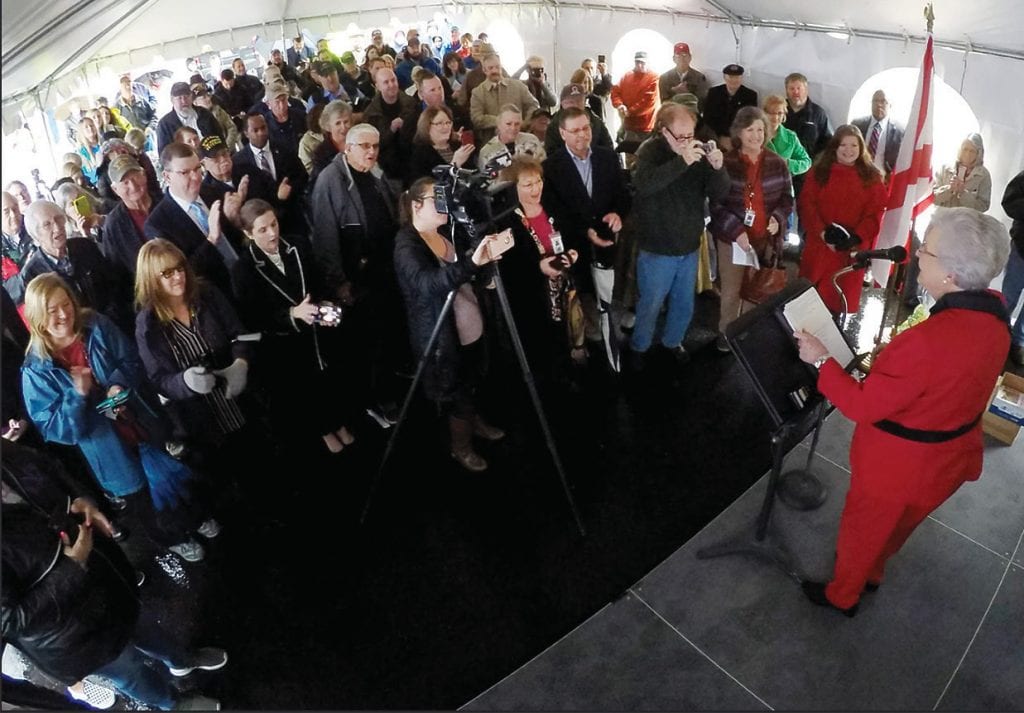 Gov. Kay Ivey good humoredly suggests that the majority standing-room crowd take a seat – if they can find one – during the Freedom Bridge dedication Monday. -Blount County Commission | Facebook

Gov. Kay Ivey led the parade of dignitaries who turned out on a cold, rainy Monday morning to dedicate what was for years called the Jones Chapel Bridge over Difficulty Creek on Jones Chapel Road, just off County Road 27. The bridge has been renamed Freedom Bridge in honor of its status as a monument to Blount County veterans of all services – especially those who gave their last full measure of devotion to preserve America’s freedoms in the country’s historic wars.

The bridge was artfully designed as a county landmark by District 3 Commissioner Dean Calvert and county engineer Dustin Stewart and his department. It was constructed by Calvert’s crew in record time of only 49 days between Oct. 22 and Dec. 9 last year. That included everything except the abutments, which were rebuilt a few months earlier.

“If I had to go to war with a crew of men, I’d go with the guys in my work crew,” Calvert said.

Freedom Bridge was built at a cost of $260,000, less than half of what it would have normally cost if contracted out. A major saving was made possible by the donation of substantial right-of-way by the Metzler family to accommodate the bridge memorial design.

According to the Blount County Commission resolution naming the bridge and creating it as a memorial to veterans, the concept was inspired by the remembered sacrifice of Blount County native and U.S. Air Force Sgt. Forrest B. Sibley, who was killed in action in Afghanistan in 2015.

Calvert said county administrator John Bullard came up with the name and memorial concept when they were discussing the bridge project months ago.