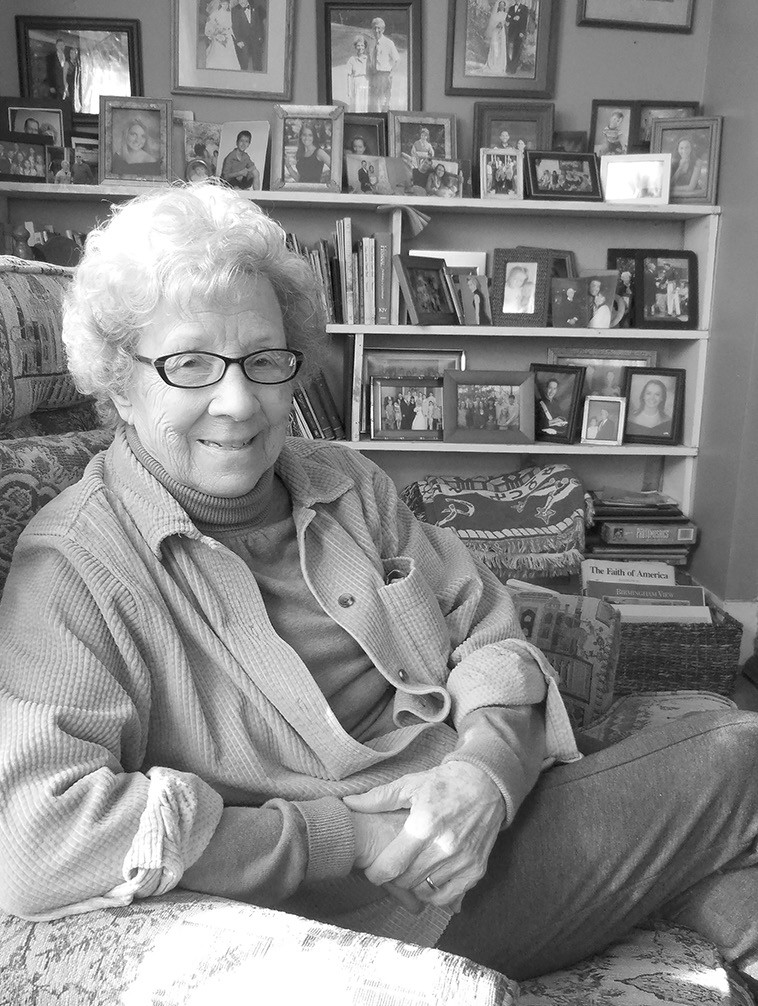 “Yes siree, good neighbors, this is Wrae Fowler bringing you the Swap Shop from Fowler Hardware, Blount County’s oldest and most-reliable store in town. We’ve been serving most of you good neighbors since 1908. If you’re looking for Fowler Hardware, look for the orange front store with the plate class windows on Main Street in Oneonta. Get your pencils and paper ready we’re getting on with the swapping and shopping.”

With those cheery words, Wrae Fowler recalls welcoming local radio listeners to debatably the most popular weekday broadcast of hometown radio. The now 96-year-old Fowler remembers she first assumed that job when husband, Joe, asked her to take over one day when he was sick. She says he never resumed broadcasting.

The still healthy spark plug relates that Joe had actually proposed the program to local radio man L. D. Bentley Jr. around 1960, after having heard a similar program on a south Alabama station. The regular broadcasts, which had begun at the station itself, shifted in later years to the store and alternated between there and down-the-avenue neighbor Cornelius’s grocery.

The Birmingham native regales listeners with many of her stories. One of her most memorable involves her first meeting Joe and events leading up to their almost 64 years of marriage. She reveals that her dad, Charles Marsh, and his sons began the family business which would, in the 1930s, become well-known area-wide as Marsh Bakery. Fowler likely inherited her father’s artistic ability from his years as a commercial artist with The Birmingham News. She still continues painting.

Branching some from that talent, Fowler, who at one time decorated all the bakery cakes, studied that craft under the famous (Dewey) McKinley Wilton in Chicago. At work with her sisters in the bakery, shortly after World War II, she says, Joe’s aunt, Grace Cowden, entered with an unusual request.

The sister explained her brother had returned from the war and suffered the death of his mother not long after. She felt he needed a lift and asked if any of the ladies would like to meet him.

Fowler claims she enthusiastically waved raised hands, volunteering. That led to adventures of a lifetime. She says that on the couple’s first date, as they traveled to Oneonta, they experienced not one but two flat tires. Glenn Chamblee, whose grocery lay on the corner before the hardware, happened along returning to Oneonta and offered the two a ride. That story has a sequel as the duo had still another flat on their planned honeymoon trip to Florida.

Despite those early setbacks, the pair enjoyed a rewarding married life blessed by five wonderful children, sons Ben, George, and Mark and daughters Lucy (Louise – Mrs. David Wilson) and Rachel (who died in an automobile accident soon after her youthful marriage to Gary Boyd).

One cannot speak with Fowler long before she shares God as the source of her being. She notes that she underwent the “baptism of the Holy Spirit” in 1961 and could not speak English for a day. She offers that her entire family has enjoyed a similar anointing. She chuckles that at least one Pentecostal friend has not known what to think of her with bobbed-haired, wearing rouge and lipstick, yet gifted with glossolalia.

The family pedigree includes an unmarried 63-year-long missionary sister, Berni, who lives in Japan, 94-year-old sister Loyce Bostram, who has returned to the states after 47 years of mission service in Japan, son Ben, also a missionary there, granddaughter Elizabeth, who with her husband and family maintain a house church in the far East, and son-in-law Dr. David Wilson, who pastors Cornerstone Church and travels frequently on mission trips when not practicing medicine here,

Fowler and Joe established their own church here, known as the Oneonta Bible Church, at the present Little Brick Church site. The couple sold their hardware store in 1971 when Joe felt called to relocate to Tuscaloosa to pastor Grace New Testament Church. They returned to Oneonta in 1993.

Fowler’s deep religious faith influenced the hardware business and radio broadcasts. To the hardware store, she added a bookstore, carrying the works of Katherine Marshall and other religious authors. Each Friday, she would hold 15-minute broadcasts alternating between Christian Book Nook and Testimony Time.

The grandmother of 19 and great-grandmother of 23 spoke for this interview in her living room surrounded by photographs of them all. In 2016, she attended the Kobe, Japan, marriage of granddaughter Joanna and stayed a month with son Ben in that island nation. That followed an Alaskan cruise the year before. She says she has now stopped her regular water aerobics classes, but one wonders what other exercise regimens the spry non-agenarian pursues.

She offers numerous fascinating stories, as she speaks of the time she set the house on fire and only learned of it when the fire trucks arrived. She says a neighbor had called Joe to report seeing flames from the chimney, before he notified the fire department.

She also recalls one Christmas-time swap shop when she took the program to the sidewalk. She interviewed and shared with people along the street, until Joe emerged from the store to tell her she had been off the air the last 30 minutes.