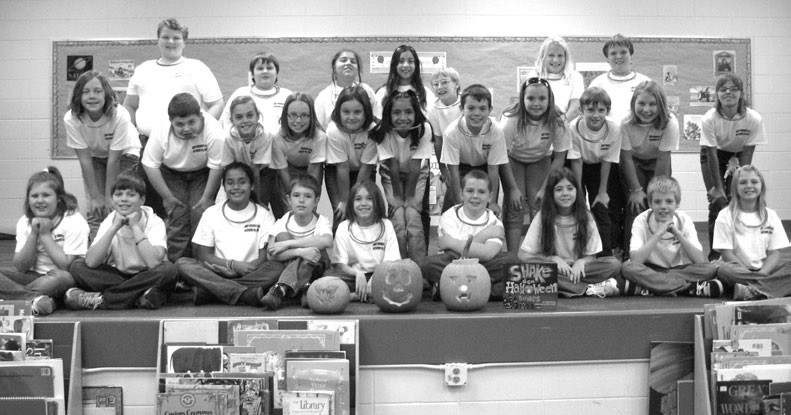 Blountsville Elementary students are ready to “shake their bones” for Halloween play.

Friday, Oct. 30, was a festive day at Blountsville Elementary School, particularly because the hallways were filled with students dressed in colorful holiday garb. The weather was perfect and spirits were high as Kathleen Sosebee’s fourthgrade class “shook their bones!”


This is Mrs. Sosebee’s fourth year of leading the group in a Halloween performance based on the book Shake Dem
Halloween Bones!
by W. Nikola-Lisa (1997). It is about a Halloween ball – a hip-hop Halloween ball – told in rhyme by a DJ who has a jack-o’-lantern head. Storybook characters like Red Riding Hood, Tom Thumb, Snow White, Goldilocks, Rapunzel, and others readers can recognize from clues in the hip-hop rhymes and fun colorful illustrations, have a hootin’ good time “shaking dem bones” as they dance the night away.

The performance began when Mrs. Sosebee cued her class on stage to the “Shake, Shake Dem Bones” song. Kindergarteners, first-, and second-graders in the audience sat quietly with watchful eyes ready to shake their Halloween bones to the beat. On stage, each of the students performed the story and recited festive pumpkin poems. The performance concluded with Mrs. Sosebee reading the colorful story to the audience.

The rockin’ refrain and the lively verses kept Snow White, Red Riding Hood, Rapunzel, and Rumpelstiltskin (and the audience) shakin’ it and not breakin’ it until the final “Scoo-bee-doo-bee-doowah. YEAH!” This holiday performance gave the fourth graders and the audience a chance to work their wiggles out while having a happy time with friends.