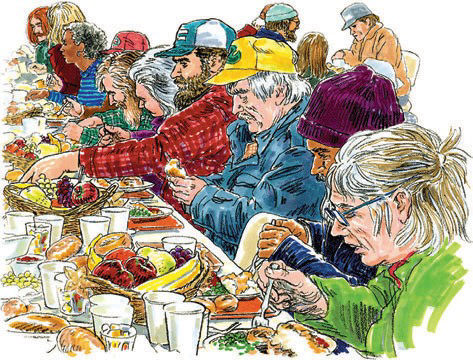 Brother Bud Jones, April 2008: “Gonna have a Christmas banquet and gospel concert for 600 people next Christmas – people who wouldn’t ordinarily get no Christmas dinner.”

Yeah, right. Where you gonna hold something for that many people – the Agribusiness Center?

I didn’t. It was supposed to be a joke. The Agribusiness Center? Are you outta your mind?

You’re having trouble getting enough food for the food bank as it is.

Where you gonna get enough food for a banquet that big?

Brother Bud: “Already got it – 800 pounds of beef already committed for hamburger steaks. Just have to put the side dishes with it.”

What about the entertainment – how you gonna afford that?

Brother Bud: “Church choirs. Got ’em all over the county. Gonna get Chris Green to get several of ’em together and turn ’em loose. That orta blow the house down.”

That conversation in early April made it seem like Hope House director Bud Jones had finally gone ’round the bend. Seven months later, final arrangements are being made this week for the Hope House’s first Christmas banquet and gospel concert for people who wouldn’t ordinarily be able to enjoy such a celebration. And Jones is expecting a crowd of 600 or more.

It is being staged with the help of over a dozen churches from around the county who have volunteered to help with food preparation, serving, transportation, and entertainment. Each church will select people in its community to attend the banquet and will provide transportation via church vans and members’ personal vehicles to and from the Sunday afternoon dinner and concert.

“I’ve had boocoos of churches calling me volunteering to help on this,” Jones said. “The response has been greater than I ever could’ve imagined. I’d just like to remind them that it’s this coming Sunday and tell them to make sure and have their transportation arrangements in place to bring their people in. This is just our way of telling those people in the county who might not have a big family Christmas dinner that we’re part of their family and we haven’t forgotten about them.”

Jones added that the dinner is open to everyone, and that there will be an opportunity to help even further by attending and donating to a special fund to provide heating through the winter months for the elderly and disabled who can’t afford the full cost of heating on their own.

“People keep calling me wanting to know ‘how much are the tickets?'” Jones said. “Well, there are not any tickets. It’s free. There will be baskets at the doors to take donations as people leave. We’d like for the public to come too and enjoy this and as they leave – those who are fortunate enough – to donate to our warmth for the elderly and disabled fund to help them make it through the winter.”

Jones said he had challenged the community to provide 20 advance donations of $100 to help cover other costs of staging the event, including bread and side dishes: baked beans, french fries, dessert, and drink. As of last week, he had received 28 such donations.

“I just can’t tell you how much the people of the county have responded to this,” he said. “It says to me that we really do live in a caring community when people are willing to come forward like they have even during bad times. If anyone else wants to make a $100 donation, we’ll put it in the winter heating fund.”

Entertainment will accompany the banquet in the form of musical “sets” performed by church choirs, according to choir director and music coordinator Chris Green. All choirs that participated in the three earlier fifth Sunday night singings have been invited to sing a set at the Christmas dinner. Following individual sets, the choirs will combine to sing a final set together.

“Each choir will choose its own songs for its part of the program while people are being served and are eating,” Green said. “At the end, we’ll bring all the choirs together, and we’ll conclude with a selection of seasonal music that will highlight the good will of the occasion and help everybody get into the holiday mood ”

The Christmas dinner concludes a series of four “fifth Sunday night” singings sponsored by Hope House and Cleveland First Baptist Church this year, with the three previous concerts held at Cleveland First Baptist. The events were created to help fund with donations several major new activities of the Hope House. Contributions averaged $2600 for each of the events.

Green said fifth Sunday night singings will continue next year with plans to move performances to various host churches around the county. “This has been extremely successful as an event to bring the community together, with people from many churches coming out to share the atmosphere of an old time gospel singing. We’re going to continue that emphasis and build on it next year with some special features that we’ll announce when the time comes,” Green said.