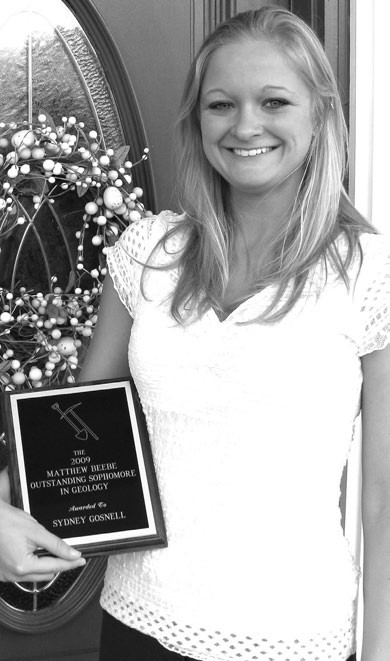 Austin Peay State University sophomore and former Susan Moore student, Sydney Gosnell, recently earned the school’s “Matthew Beebe Outstanding Sophomore in Geology Award.” In addition, she has attained the President’s List every semester since her enrollment in 2007. Sydney pursues a bachelor of science degree in geology to prepare her for a related career with the National Aeronautics and Space Administration (NASA).


Highly trained NASA geologists not only study data received from earth-orbiting satellites that can help improve our daily life on earth, but may provide stepping stones to make travel to, and life possible on, other planets.

Mars Rover vehicles developed by NASA scientists, including geologists, have already carried out geological studies and experiments on Martian soil. The robotic geologists are forerunners to human geologists who may someday be sent to set up working colonies and laboratories on our neighboring worlds. Sydney Gosnell just might be among them.

Sydney is the daughter of Leigh Sharpe, and granddaughter of Bob and Jean Sharpe, of Blountsville.