Force or no force? 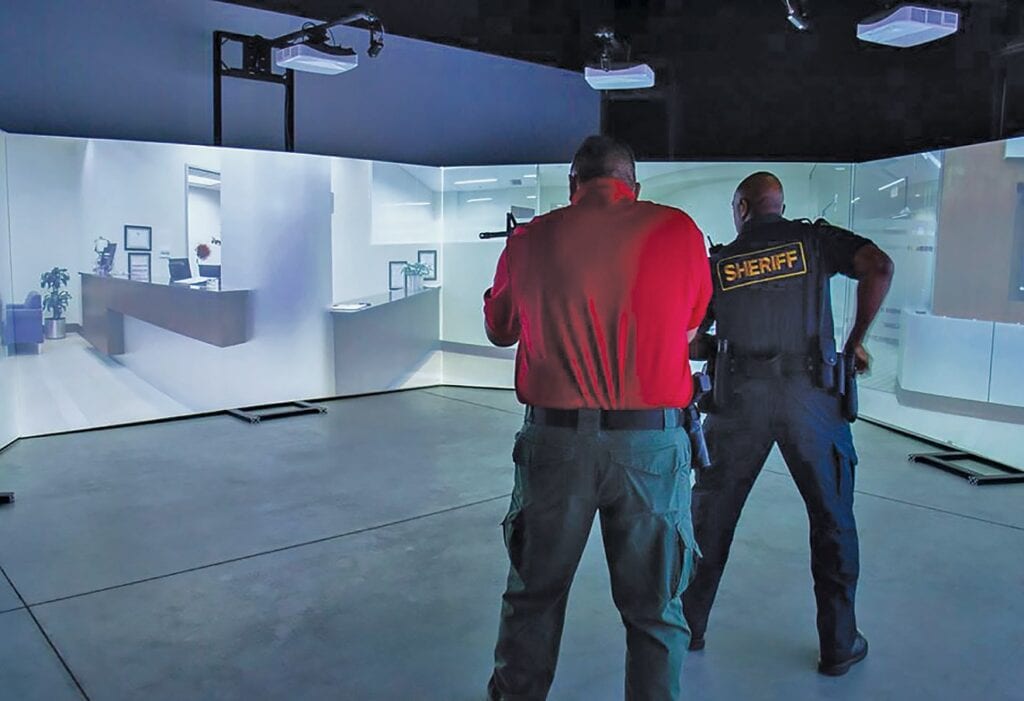 On Tuesday, June 16, I was out doing a little shopping when I received a phone call from Snead police chief Steve Gunn. Being a staff writer for the newspaper, I wasn’t alarmed by the call. I figured he had a story breaking and wanted to talk with me about it. Well, I was partially correct. But, it was more than a story, it was a story where I would be the point of focus for a few short minutes.

Gunn informed me that Snead Police Department had been chosen to have the Use of Force training simulator, administered through Alabama Municipal Insurance Corporation, at their office for two days. The simulator would serve two purposes. It would give a local training opportunity to officers and it would help keep their insurance rates lower.

As we discussed its purpose, I quickly determined that not only did he want me to come by to get the needed information, Gunn also wanted me to go through the Use of Force simulation-training program. Wow, all sorts of thoughts began running through my mind. Would I make correct decisions? Would I look like a fish out of water? Would I be the laughing stock of Blount County?

I arrived later that afternoon and met with Gunn and assistant chief Ron Kiker.Kiker has been thoroughly trained in Use of Force and would be the person operating the simulator while I attempted to make correct split-second decisions.

Armed with an air loaded training handgun and taser, I took my position. I would be viewing each situation on a huge screen in front of me. My goal was to interact with the people on the screen, try to resolve the situation with little or no use of force if possible, and to protect all people involved, including those directly involved in the situation, others in the proximity of the situation, and of course, myself.

And so we began.

Yes, it was initially awkward to be talking to a video screen and getting no response, but that awkwardness soon diminished when I became fully involved in each situation. There were situations of someone going in and out of a store with a gun tucked into his waistline, four students in a library involved in a confrontation, a domestic violence situation, and an altercation at a local restaurant.All required split-second decisions, but the one that has most affected me was a traffic stop of a known criminal who had active warrants.

In the simulation, the officers pulled the truck over, and the subject got out of the vehicle. He was calm and, for the most part, cooperative. The man asked the officers to allow him to take his 11-year-old daughter that was in the truck home, and he would turn himself in.

The officers would not agree to his request, and while the situation was still rather calm, the 11-year-old daughter emerged from the truck with a pointed shotgun. She made threats to shoot. Her father pleaded with her to put the gun down; however, she did not comply. She shot at the officer talking with her father. Not only did it put the officer in jeopardy, it put her father and the assisting officer in danger.

When she refused to put the pointed gun down and then began firing a shot, I had to make that split-second decision to shoot or not shoot. So many thoughts ran through my head in that split second. I fired a lethal shot, and she fell to the ground before getting off any more shots.

According to Kiker, I made the correct decision, but I will tell you that the emotions that have run through my mind over the past few days have varied. Even though this was only a simulation and no one was actually shot, I have thought over and over what an officer must deal with when this type of situation happens.

Thoughts of could I have done anything differently will likely inundate their thoughts. The grief of knowing you have taken someone’s life despite the situation. Will there be an outrage of the community or a pending lawsuit?

There is so much to deal with as the officers continue to protect and serve.

All I can say is law enforcement officers have my utmost respect. Yes, there are a few that do not have the best interest of helping people in mind, but for the most part, officers do an excellent job of maintaining order and keeping peace while trying to de-escalate each situation.

I am personally sending out a special thanks to all of our Blount County law enforcement officers. They are truly heroes in my book, and in our quaint, little county.

Also, many thanks to Snead Police Department for hosting the simulation training and inviting all Blount County and surrounding county municipalities to take part in this training opportunity. A total of 38 officers from five different agencies completed the training. Taking such a proactive approach and investing in training opportunities for officers only enhances their ability to protect the community.

Since taking over as chief, Gunn has taken a hands-on approach and made training a priority for his officers. He has encouraged Snead officers to not just meet training guidelines, but to exceed CEU requirements. Proudly, he can say all current Snead officers currently exceed guideline expectations.