For most teams, a break from region play 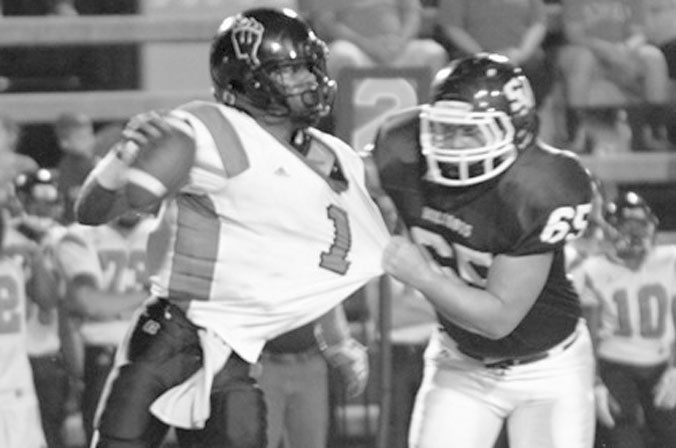 After this week, we will be halfway through the high school football regular season.

This week is always nice as most teams step outside of the region schedule to play a rival. Cleveland-West End, J.B. Pennington-Locust Fork, Southeastern- Holy Spirit, Corner-Hayden, and Oneonta-Susan Moore feature natural rivalries and games that mean a little more to the casual fan – okay, one of those probably doesn’t. I bet you can figure it out.

One team that is not stepping out of the region this week is Appalachian. The Eagles have been hammered by injuries and will need every healthy body they can find as they travel to take on Addison, the No. 4 team in Class 1A.

Appalachian got a much-needed week off last week but Addison almost had the same thing with a don’t-break-a-sweat beatdown of Shades Mtn. Christian. The Eagles got out to a strong start with wins over Meek and Sumiton Christian but have since lost five starters to injury, including two that are done for the year. Appalachian has been able to move the ball effectively on the ground and will need to do so again this week against the best defensive team in the region. Addison will try to control the line of scrimmage on both sides of the ball with experienced offensive and defensive fronts. The Eagle defense simply has to stop the run. Addison will line up and test the Appalachian defensive front with power and then counter with just enough misdirection to keep the defense honest. Eagle special teams need to come up with a game-changing play this week.

Addison is back to being old-school Addison. The Bulldogs are not fancy, just effective and devastatingly efficient. The Bulldogs have good size up front (avg. 225 lbs.) on both sides of the ball and there is a ton of experience returning among the linemen. Addison pounded out almost 250 yards and five touchdowns on the ground in the first half last week at Shades Mtn. and led 36-0 at the break. Ragland was able to make something happen on the ground against the Bulldogs and scored on a couple of long runs in the second half but otherwise the Addison defense has been very solid against the run. Appalachian hasn’t thrown the ball well since James McMunn went down in the second game against Sumiton Christian but this would be a good week to get the passing game cranked back up. The Eagles had a couple of running backs banged up against Falkville and getting those two back would be huge this week.

Piedmont really did a number on the Panthers last week. Having to go into the game without the starting quarterback certainly didn’t help. If Peyton Gilliland is back this week, the Panther offense is a totally different animal. The lack of an effective running game early last week meant that the Piedmont offense was back on the field against a tiring Cleveland defense every three or four plays. The turnovers (five) certainly didn’t help. The Cleveland defense will face a Wing-T offense that has been getting better each week. The Panthers couldn’t tackle the quicker Piedmont skill players last week and will need to do a better job across the line of scrimmage this week on both sides of the ball.

West End played one very good half of football last week and trailed Westbrook just 21-20 at the break. However, the bottom fell out in the third quarter as the Warriors took advantage of a turnover and blocked punt to score a pair of quick touchdowns and take control. The Patriots have moved the ball pretty well on offense this year but turnovers have been a huge problem. The Patriot defense was run over by Fyffe and Westbrook threw for almost 300 yards last week. If Cleveland is close to being back to full speed on offense, then Patriots will have their hands full this week.

Pennington put up decent numbers – at least as far as yardage – last week against Plainview but turnovers and bad run defense proved to be the difference against the Bears. The Tiger defense simply has to play better against the run. In all three losses, the opposition was able to control the ball and move the chains, especially in the second half. The Tiger offense can make plays but three turnovers against a team like Plainview is not going to get it done. Locust Fork is a much better defensive team this year and the Hornets are good enough to cause problems for the Tiger offense.

Locust Fork got a huge win at Fairview last week and it was the play of the Hornet defense in the second half that was the difference. The Aggies were turned away deep in Hornet territory twice in the fourth quarter as the Hornet defense came up with big plays to stop each possession. The Locust Fork offense put up good numbers – 264 total with 188 coming on the ground. This is still an offense that is developing a passing game. Pennington has had trouble stopping the run and Locust Fork will look to pound away at the Tiger front early and often. The Locust Fork option game has caused problems for opposing defenses.

Big-time rival may be just what the doctor ordered for the Wildcats.

Corner has played solid football this year but the speed and quickness of Munford, Dora, and Calera have been too much for the Yellow Jackets. Corner has good size (avg. 240 lbs.) across the offensive and defensive lines but this group is inexperienced for the most part and depth behind the starters is a concern. Senior running back Hunter Doppler (5’10, 170) went over the 100- yard mark two weeks ago against Dora and he is a consistent threat on the ground. The Corner defense has actually played pretty well. The Yellow Jackets held top-ranked Calera to a season-low 37 points last week. Linebacker Jake Averhart (6’2, 185 Sr) is one of three talented linebackers for the Yellow Jackets. He had 17 tackles against West Blocton on a night when the defense forced six turnovers – three interceptions and three fumbles. Corner special teams are solid.

Hayden continues to play hard but also continues to have very little to show for it. The Wildcats moved the ball a bit last week against Pinson but struggled to hold onto the ball and couldn’t finish drives. Corner has been solid this year on defense and it will be interesting to see if the Wildcats can establish the run. Hayden is rotating as many as six backs to stay fresh in the second half and depth is a bit of an issue for the Yellow Jackets. Defensively, Hayden must hold up against Doppler and the Yellow Jacket running game. If Corner is able to run the football, it will be a long night for the Hayden defense. Wildcats special teams have been decent but need to come up with a play or two this week.

Oneonta is slowly turning the corner. The Redskin offense enjoyed its best night of the year last week, pounding out 299 yards on the ground. Of course, Crossville isn’t exactly SEC-caliber on defense but it was a very good night for a Redskin offense that is beginning to put things together. The passing game is still a question mark – Oneonta completed its only pass attempted last week and it was a 12-yard strike from Ko Powell to Brock Latta for a touchdown. How dominant was the Redskin offense last week? Here are the Redskin scoring drives: three plays, 43 yards; four plays, 42 yards; two plays, 55 yards; two plays, 59 yards; and two plays, 45 yards. The Oneonta defense limited Crossville to just 104 yards and a lot of that came in the second half when the game was already well in hand. Rashad Roberson brought a punt back 68 yards for a touchdown last week and the kicking game continues to show promise for the Redskins.

Susan Moore did some good things last week but five turnovers, including three interceptions returned for touchdowns, is all but impossible to overcome. The Bulldog offense has turned the ball over too much against good defenses – seven against Cleveland; five against Weaver – and the opposition has been very good at turning the Susan Moore turnovers into points. Susan Moore got decent production last week from the running game and that will be key this week. Other than the night Guntersville piled up almost 250 yards, Oneonta has done a good job against the run. Susan Moore’s offensive line will have to have its best night of the year. Defensively, the Bulldog front seven will be tested early and often. Oneonta has found its running game after pounding Crossville fro 299 rushing yards last week. Bulldog coverage units will have to tackle well this week.

Southeastern has toured the top of Region 6 and it was not a very good trip, at all. Falkville, Addison, and Ragland are all bigger, stronger, and deeper than Southeastern and the final scores prove that out. Now, the Mustangs take on a Holy Spirit team that is coming off a 50-0 drilling at the hands of Keith last week. The Mustangs have not been able to line up and be competitive with anyone they have seen on the schedule this year but that could change a bit this week. If the Mustangs can win a couple of battles across the line of scrimmage, Mauris Zamora might find a little room and get the running game going. The Southeastern defense will face a Holy Spirit offensive line that has struggled against better defenses – or at least those not belonging to Waterloo.

Holy Spirit can sympathize with the Mustangs. The Titans never had a chance the last three weeks. In last week’s loss at home, the Titans gave up 30 points in the first quarter and were down 50-0 at the half. The second half was played with sixminute quarters. Holy Spirit managed just 60 yards of offense and turned the ball over four times. The Titans have some size up front, particularly 6’4, 320- lb. sophomore Tommy Hargro. The Holy Spirit offense is led by quarterback Chase Lake (5’8, 150 Jr), who has a good arm and is athletic enough to make plays when the protection breaks down. The Titan defense has really struggled on the year. Keith threw four passes last week and all four went for touchdowns. Titan special teams have already given up three scores by opposing returners.