Five straight championships for the Hornets 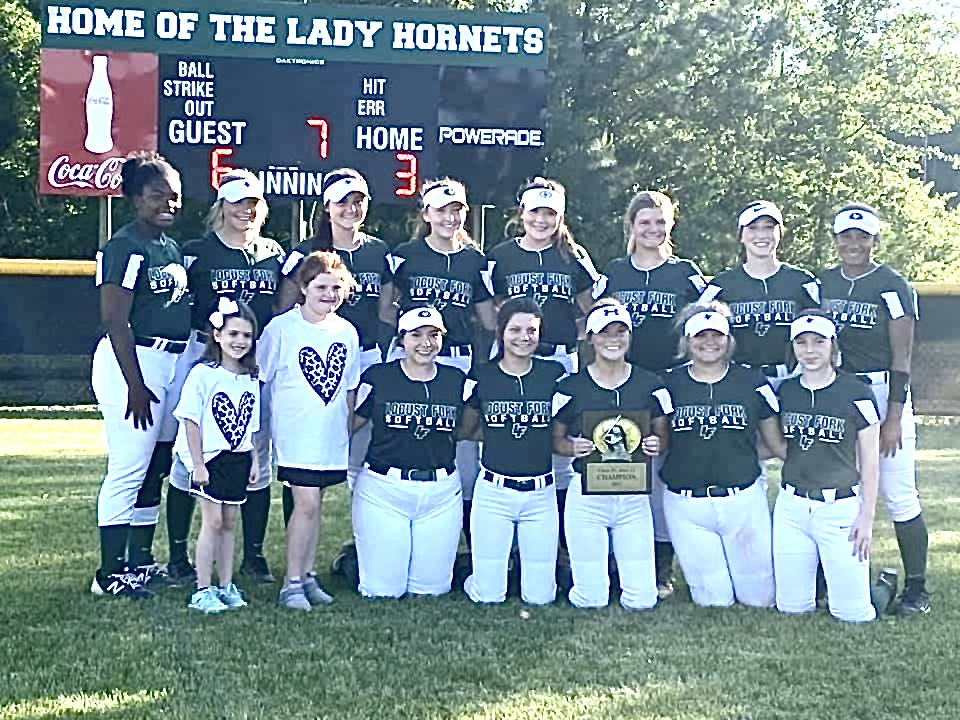 Last Wednesday, Locust Fork began its pursuit of a fifth straight area championship against Southeastern in the opening game of the 2A Area 11 tournament. The Hornets finished the regular season in first place in area play giving them home field advantage and top seed.

Southeastern started the game strong scoring two runs in their first at bat. After Riley Ruple singled on a bunt, Maddie Fortenberry drove her in on a line-drive triple. Fortenberry scored the second run after the third baseman mishandled Sydni Miller’s grounder.

The two-run lead didn’t last with the Hornets posting three runs in the bottom of the first. The first three batters, Hannah Payne, Alivia Watkins, and Savannah Neely, reached first on base hits with Payne scoring on Neely’s grounder to center field. Jenna Adams knocked in Watkins and Neely on a line drive to left to take the lead.

It was three up and three down for the Mustangs in the second inning while the Hornets picked up a couple more runs. Averie Branham scored on Payne’s outfield hit and Payne was able to tag up and score from third on Calvert’s fly out. 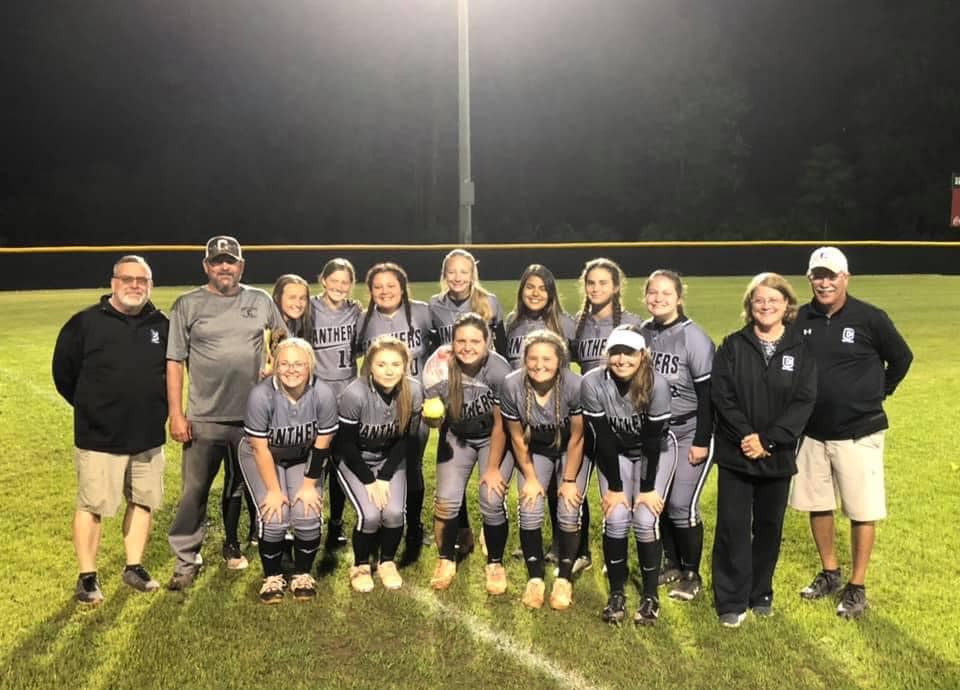 Down 2-5, Ruple led off the third with a ground ball single to center field. She stole second, reached third safely on Carpenter’s sacrifice, and scored on a passed ball. The Mustangs didn’t give up any runs in the bottom of the inning with the Hornets up by two.

After a scoreless fourth inning, the Mustangs fared no better in the top of the fifth while the Hornets added six runs in the bottom of the inning. With bases loaded, Maddie Busenlehner doubled on a line drive to center field scoring Hancock and Emma Adams. Payne drove in Busenlehner and then scored on Watkins’ grounder to center. Neely drove in Watkins with a line-drive double, advancing to third on the throw to the plate. Another Mustang miscue allowed Neely to score giving Locust Fork an 11-3 lead with two innings remaining.

No runs were scored in the sixth, but Southeastern tried to get a rally going in the top of seventh. Olivia Bearden led off with a line-drive single to center field and scored on Alyssa Miller’s line-drive double. Ruple drew a walk while A. Miller scored on another error. Ruple, who scored the game’s first run, scored the final run on S. Miller’s outfield hit bringing the final score to 11-6.

Payne pitched the entire game and got the win for the Hornets allowing six runs on nine hits while striking out nine. Emilee Hamilton started for the Mustangs. Through five innings, she surrendered 11 runs on eight hits. Michaela Jones pitched the final inning giving up zero runs and zero hits.

Locust Fork’s 11-6 win sent the Mustangs to the loser’s bracket to face either Cleveland or West End while Locust Fork waited on the winner. West End v Cleveland

After falling behind 0-6 against the Patriots, the Panthers fought their way back, but came up one run short losing 8-9. West End got on the board first scoring four runs in their first at bat. They scored two more in the top of the fourth for a 6-0 lead. The Panthers finally got one run home in the bottom of the fourth when Kylee Gilliland scored on a grounder to center field by Emma Thomas. The Patriots finished the fifth and sixth with no runs, while Cleveland added one in the fifth when Patelyn Battles drove in Tori Lind.

In the bottom of the sixth, Destiny Champion singled on a line drive to left field scoring Trinity Sanders who drew a walk. Champion advanced to third on an error and then scored on an error by the catcher. Thomas, who reached on an error, made it to third as Champion scored, and took advantage of another error on the catcher to score the third run of the inning. Heading into the last inning, the Panthers were down by only one.

West End scored three runs in the top of the seventh to go up 9-5, but the Panthers kept pushing. Kahtlyn Painter doubled on a fly ball to center giving the Panthers a runner in scoring position. After Gilliland drew a walk on four straight balls, Sanders came to the plate and hit a bomb to deep right for a three-run homer. Needing one run to tie the game, the next two batters struck out giving West End a 9-8 win.

Game three was an elimination game for the Mustangs and the Panthers. Southeastern scored first, but Cleveland scored six in the bottom of the second to go up 6-1. In the top of the third, Southeastern evened the score with five runs of their own. The Panthers got two more runners home in the fourth to retake the lead, 8-5.

The Mustangs made it a two-run game after scoring one in the top of the sixth. But the Panthers finished off the sixth with six more runs. Down 7-14 in their last at bat, Southeastern got only one runner home giving the Panthers a 14-8 win.

Battles and Champion each collected three hits for the Panthers with Champion driving in three runs and Battles driving in two. Painter, Gilliland, and Bailey Marsh finished with two hits. Gilliland added four RBIs and Painter had two.

Carpenter led the Mustangs at the plate with a home run on two hits and three RBIs. Fortenberry went 2-for-4 with one RBI while S. Miller drove in two runs in the fifth on a double. Hamilton took the loss giving up five runs on six hits in two innings. Jones pitched the final four innings surrendering nine runs on nine hits.

Battles got the win. In five innings, she allowed six runs on six hits, striking out six. Sanders came in to pitch the final two giving up just one run on two hits. Locust Fork v West End

The score stayed 4-0 until the top of the fifth when the Patriots finally got on the board with two runs. Locust Fork got one run back in the bottom of the inning on Neely’s score giving the Hornets a 5-2 advantage. The Patriots managed to get one run in the sixth and another in the seventh to put them within one, but Locust Fork’s 5-4 win sent West End to the loser’s bracket. West End v Cleveland

In a rematch from the night before, the Panthers and Patriots played solid defense behind great pitching. Neither team could get any runners home and the score remained 0-0 heading into the fourth inning. The Panthers held the Patriots in the top of the inning and finally put a run on the board in the bottom half of the inning when Sanders homered over the center field fence.

After a scoreless fifth inning, the Patriots looked like they were headed toward a big inning. With runners on second and third and only one out, the Panthers threw one runner out at first for out number two, but the Patriots did score one run on the play. A walk put runners on the corners, but the next batter struck out on three straight pitches to end the inning.

The game was still 1-1 heading into the seventh. West End’s lead-off hitter singled on a line drive to left field, but the next two batters couldn’t get the ball in the gap and the Panthers easily threw the lead-off runner out at second for the first two outs. The next Patriot batter struck out to end the top of the inning.

In the bottom of the seventh, Marsh drew a walk on four straight balls and got into scoring position after Battles hit a line drive to left field. Painter hit a line drive to third that the Patriots quickly turned into a double play and Gilliland grounded out to send the game into extra innings.

The Patriots went three up and three down and Sanders was at the plate for the Panthers. With a full count, Sanders ended the game with one swing of the bat sending the ball to deep center for her second homer of the game. Sanders went 3-for-4 with two RBIs and both Panther runs. The 2-1 win secured their spot in regionals and advanced them to the championship game against the Hornets.

The Panthers hit the field Friday in their fourth game of the area tournament. Both teams battled until the last pitch with Locust Fork coming out on top 6-3 to win their fifth straight area title. The Hornets head to regionals with a 21-3 record while the Panthers are 15-13. They head south to Montgomery for the East Central Regional tomorrow. The Hornets play Sand Rock and the Panthers play Spring Garden. Both games start at 9 a.m.