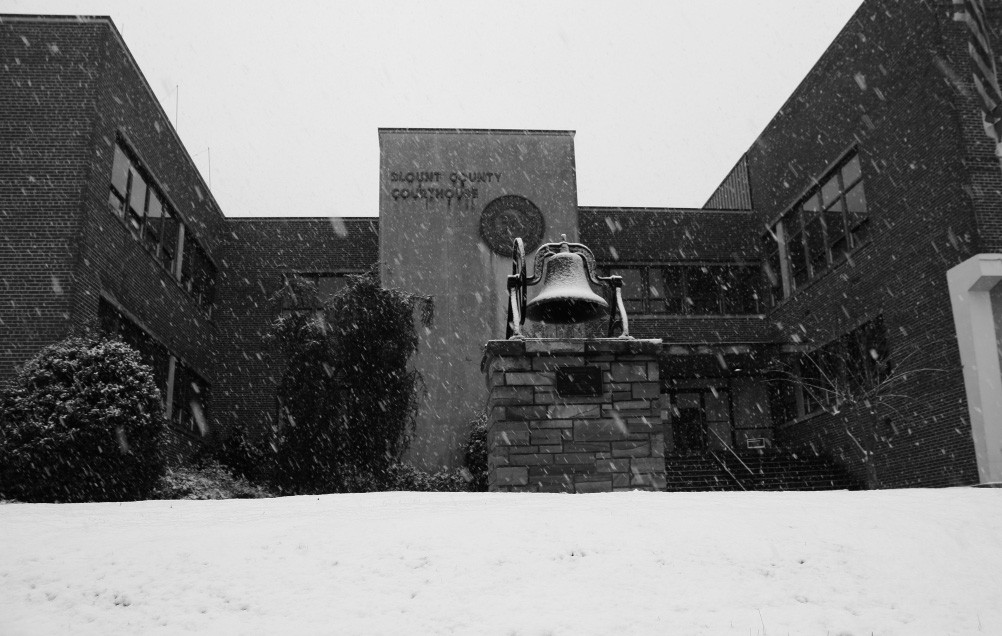 We can argue about whether it’s caused by global warming or not, but its beyond debate that we’ve had some big time changeable weather for the last 10 days.

First came the rain – 40 days and 40 nights would be an exaggeration, but it seemed like that long. The records say it started Sunday, Jan. 13, then rained more or less steadily for four days and nights straight, much of it light rain and drizzle interspersed with occasional breaks and periods of heavier downpour. The rain gauge at Inland Lake registered 5.8 inches, and a similar amount was recorded at Cleveland over the period from the evening of Jan. 13 to midday Jan. 18. 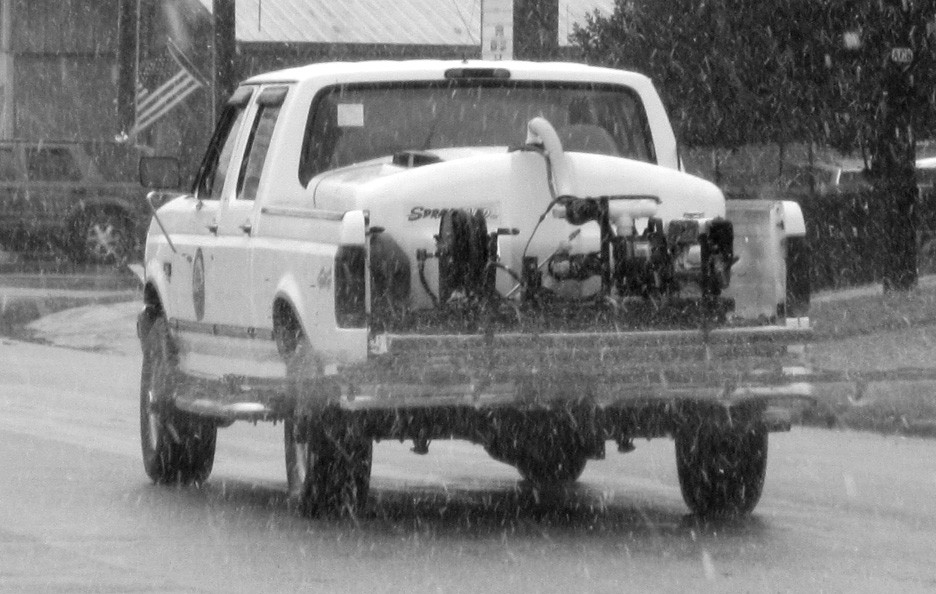 ( Top) Courthouse at 3 p.m. Thursday. Here and elsewhere, some workers who left late fared better going home than those who left early. (Bottom) New street spraying apparatus gets its shakedown in Oneonta Thursday. The sprayer uses a solution of calcium carbonate to prevent ice accumulation on streets. It passed with flying colors. It’s advertised to protect streets from ice and snow buildup for up to 72 hours. It’ll take a tougher storm than this to test that claim, however.

As soil became saturated with rainwater, tree roots began to lose their purchase, resulting in a number of uprooted trees, again in locations widely scattered around the county. The number of instances of sizable trees falling across roads, driveways, and in yards and on farms around the county undoubtedly exceeded the 20 reports recorded by emergency management, which tended to be those that blocked roads and obstructed traffic.

The snow began late Thursday morning – lightly on little cat feet at first – then respectably heavy by mid-afternoon. Temperatures hovered just above or at freezing, depending on local microclimates.

Then, about 4 p.m., when things were just starting to look scary in some places, the snow stopped. The sun came out, and roads that had become slushy, or even snow-covered and icy at some higher elevations, actually began to thaw and clear in the few remaining minutes before sunset.

Employees who stayed at work and didn’t leave to go home until after 4 p.m. may have had less trouble than those who, frightened by the appearance of seemingly blizzard conditions earlier, left in the teeth of the storm and at the height of the brief period of accumulation.

Schools were another matter, though not for Blount County. Both systems in the county dismissed at 11 a.m. and buses hit the roads, returning all students home without a single incident of bus trouble reported, in contrast with surrounding counties including Cullman and St. Clair, which dismissed later and experienced significant problems as a result, with minor accidents and stranded buses and students not arriving home until late in the day.

“Both school systems here did an excellent job taking care of their students, and I commend them for it,” said EMA director Max Armstrong. “I’m not aware of a single school bus incident in Blount County during this event.” Both systems began classes after a three-hour delay on Friday, the day after the snow.

Reported snow amounts varied from an inch-and-a-half at the courthouse early Thursday afternoon to 3 inches at Pine Mountain. The deeper accumulations were generally in the southern half of the county, with smaller amounts in the north.

As with earlier flooding, reports of icy bridges and roadways came in from all over the county – a dozen in all including from Summit, Holly Springs, Dallas-Selfville, Limestone Springs, Blountsville, county roads 15 (Locust Fork area), 19 (Remlap), and 21 (Snead), Hoods Crossroads, Susan Moore, and Straight Mountain.

Slick roads touched off a flurry of vehicle mishaps, a total of 47 over the 24-hour period from Thursday noon through Friday morning, with 18 on Thursday and 29 on Friday. A particular trouble spot was Ala 75 north of Oneonta near the new state bridge construction project where several accidents occurred. No injuries were reported during the duration of the snow event.

On the heels of the one-two punch of rain and snow – after an almost balmy weekend – came the cold snap of the last two days, with lows in the low 20s Monday and Tuesday night. Coldest reported temperature at the Cleveland weather station was 24 degrees Monday night. Tuesday night was predicted to be worse.

Not so bad so far, all things considered. Hey, Old Man Winter – that all ya got?