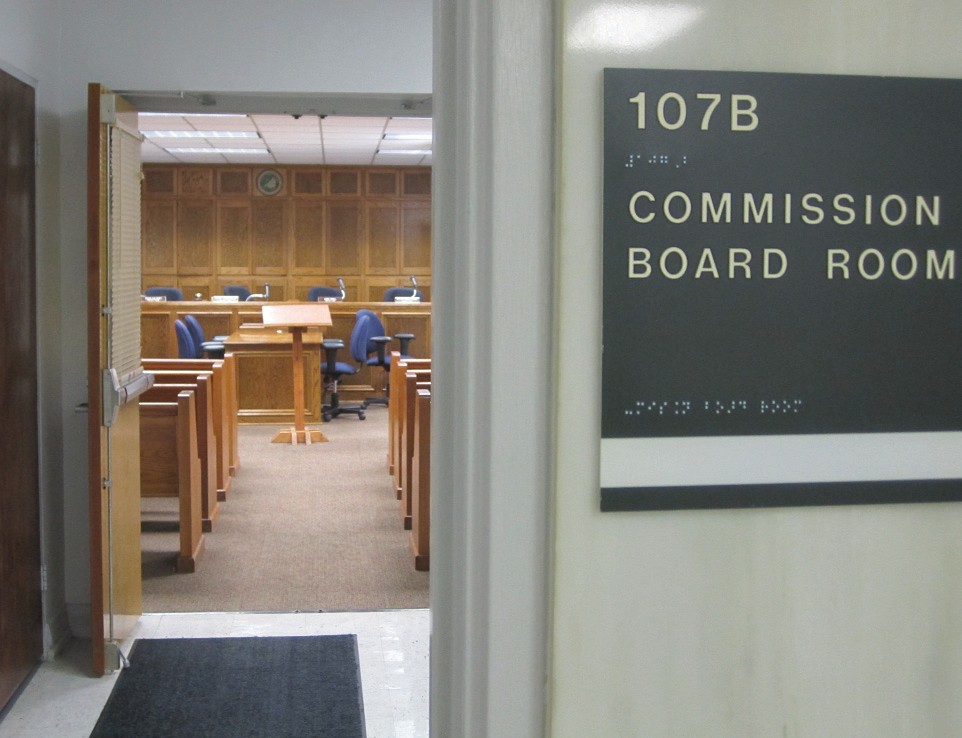 A lobby’s-eye view of the commission boardroom where closed meetings of the Blount County Merit Board are held. If Mitchell elects for the hearing to be open to the public, a larger room such as the small courtroom at the courthouse or the auditorium at the Frank Green Building will need to be used to accommodate those interested in following the proceedings.

Ralph Mitchell, former county administrator for Blount County, has filed a request for a hearing before the Blount County Merit Board. The purpose of the hearing will be for Mitchell to appeal his employment termination decided by majority vote of the Blount County Commission on Aug. 21, and upheld in a subsequent hearing on Sept. 6.

The time for the appeal hearing has not been definitely set yet, though two possible dates have been provided to Mitchell by the merit board. The hearing will be held at 1 p.m. on either Oct. 5 or Oct. 12, the choice to be made by Mitchell and his attorney Greg Reid, who said he has still not been provided with specifics and details of the charges he had requested from the commission on several occasions, beginning well over a month ago. The hearing must be held within 30 days of the notice of the appeal filed by the employee. That date was Sept. 14.

Reid said no decision has been made yet as to whether to request the meeting be held in closed session or open to the public. The choice rests entirely with the employee, according to merit board rules. If Mitchell opts for an open hearing, Bill Newman, chairman of the merit board, said it will be necessary to locate a larger room than the commission boardroom, where closed hearings are usually held. Precis on the merit board

According to the Rules and Regulations of the Merit System Board of Blount County, Alabama: (selected sections quoted in italics)

When an employer initiates an action against a merit employee “…the employee will have the right, either in person or by counsel, to address the Board upon all issues, summon witnesses on his own behalf, to cross examine witnesses summoned on behalf of the employer, face his accusers, and to be heard in his own defense.”

“…Within ten (10) days following the conclusion of said hearing, the Board shall enter its decision as to whether said employee shall be reinstated, removed, discharged, or suspended, or take such other disciplinary action as in their judgment is warranted by the evidence and under the law.”

“Any person aggrieved by the decision of the Board may appeal such decision to the Circuit Court of Blount County within thirty (30) days from from the rendition of such written decision by the Board.”

The Merit Board was established in Blount County about 1980. It was created “to protect employees and to make sure they get a fair shake,” said Newman.

“We’re going to have a fair hearing – fair to both sides,” he added. “I don’t want to know anything about this case before it comes to this board. I don’t want to be influenced by hearsay, and I told other board members I didn’t think we should attend the earlier hearing for that reason.” Makeup of the merit board

The Merit Board, by design, is made up of a broad spectrum of people, Newman said. According to law, it is made up of one member appointed by the Blount County Commission (Tim Frye), one by the municipalities of the county (Garry McGill), one by the Fraternal Order of Police, Lodge No. 28 (Newman), one by all county employees (Brett King), and one appointed by all four of the above members (Sharon Murphree).