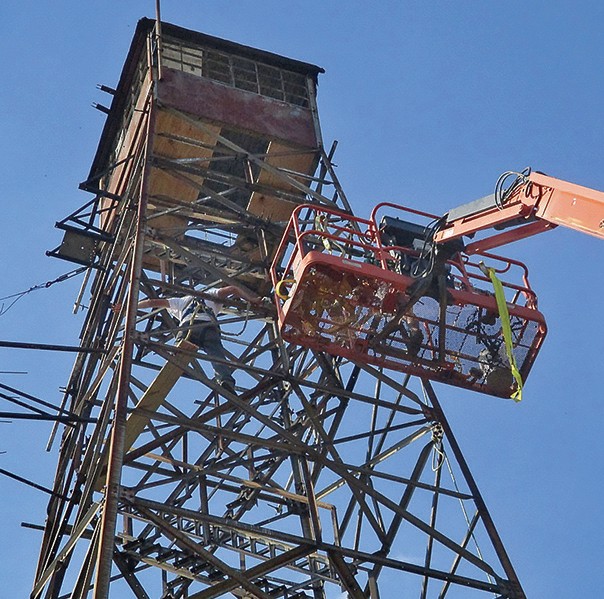 Saturday, July 7, at 1 p.m. That’s when the Palisades Park fire tower will open to the public in a ceremony celebrating some four years of coordination and renovation to make the structure available as a point of interest to Blount Countians and others traveling through the county. The opening ceremony will feature comments from Probate Judge Chris Green, who has championed the project since its inception. Afterwards, those in attendance will be able to ascend the tower to the cab, where a 360-degree view of much of the county awaits.

Work on the site began in 2014 when an agreement was finalized with the Alabama Forestry Commission for the county to lease the structure and recondition it as a tourist attraction. Renovation has included repairing and adding railings to the stairs, reflooring and reroofing the cab, reinforcing structural components, and repainting the entire tower – with safety inspections along the way. Much of the renovation was completed in October of 2016 when the photo shown was taken. Funding sources for the $76,000 project included contributions from the Community Foundation of Birmingham, CAWACO, the Palisades Park Board, the general public, and the efforts of the Blount County Commission.

Palisades Park manager Jeff Todd said that much of the county is visible from atop the tower. “On a clear day, people have been able to see the tall buildings in downtown Birmingham,” (37 miles away) he said. Other high points that may be visible for a well-oriented eye include Wornock Mountain (el. 1,429 feet), 13 miles due west; Blount County’s un-named highest point (el. 1,540 feet) near Mountain Brow Drive on the St. Clair County line, about 9 miles east southeast; and Cahaba Mountain (el. 1,514 feet) about 17 miles south southeast.

“I feel the citizens of Blount County will be very appreciative of the county commission and the Palisades Park Board’s effort to restore this historic structure. Many people across the county have fond memories of visiting the tower in years gone by and will enjoy their visit back to the tower as an added attraction to Palisades Park,” Green said.