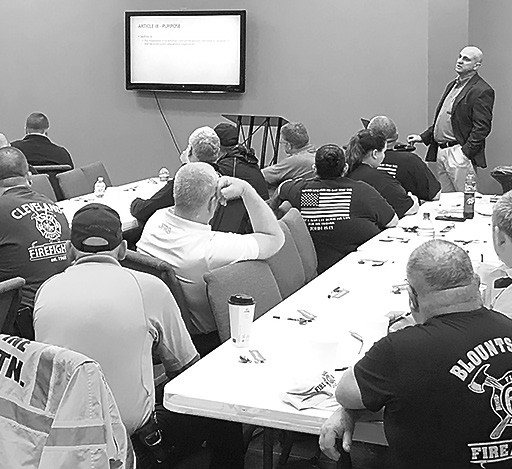 In an effort to improve professional development and networking to enhance the services delivered to the citizens of Blount County, 44 fire chiefs and department officers representing 20 fire departments attended the first ever Blount County Fire Chief Executive Conference at Anchors Church on Feb. 23.

Considered as “resounding success,” attendees learned about a multitude of public safety topics such as street-smart command, rural healthcare and current availabilities in Blount County, crime scene and traffic control, and other noteworthy matters.

Deputy State Fire Marshal Fred Cochran, who was in attendance, said, “Anytime we can get all departments together, its makes the entire organization better. The information presented was very good. The desire is to get all departments to be uniformed across the county. We already have a good start at it.”

Cochran went on to say that as an organization they are focusing on getting the word out about fire prevention. He said public education is the key as they move forward in their attempt to teach citizens how to stay safe. While last year the number of statewide fire related deaths decreased from 81 in 2017 to 75 in 2018, the goal is to have no fire related deaths.

One thing Cochran reminds citizens to do is to check smoke alarm batteries every six months and replace the smoke alarms every 10 years even if they appear to be still working. He also wants the public to know that free smoke alarms are available for anyone needing them. Cochran said requesting smoke alarms is as easy as calling your local fire department or the state fire marshal’s office at 334-241-4166.