Finding peace among the wreckage 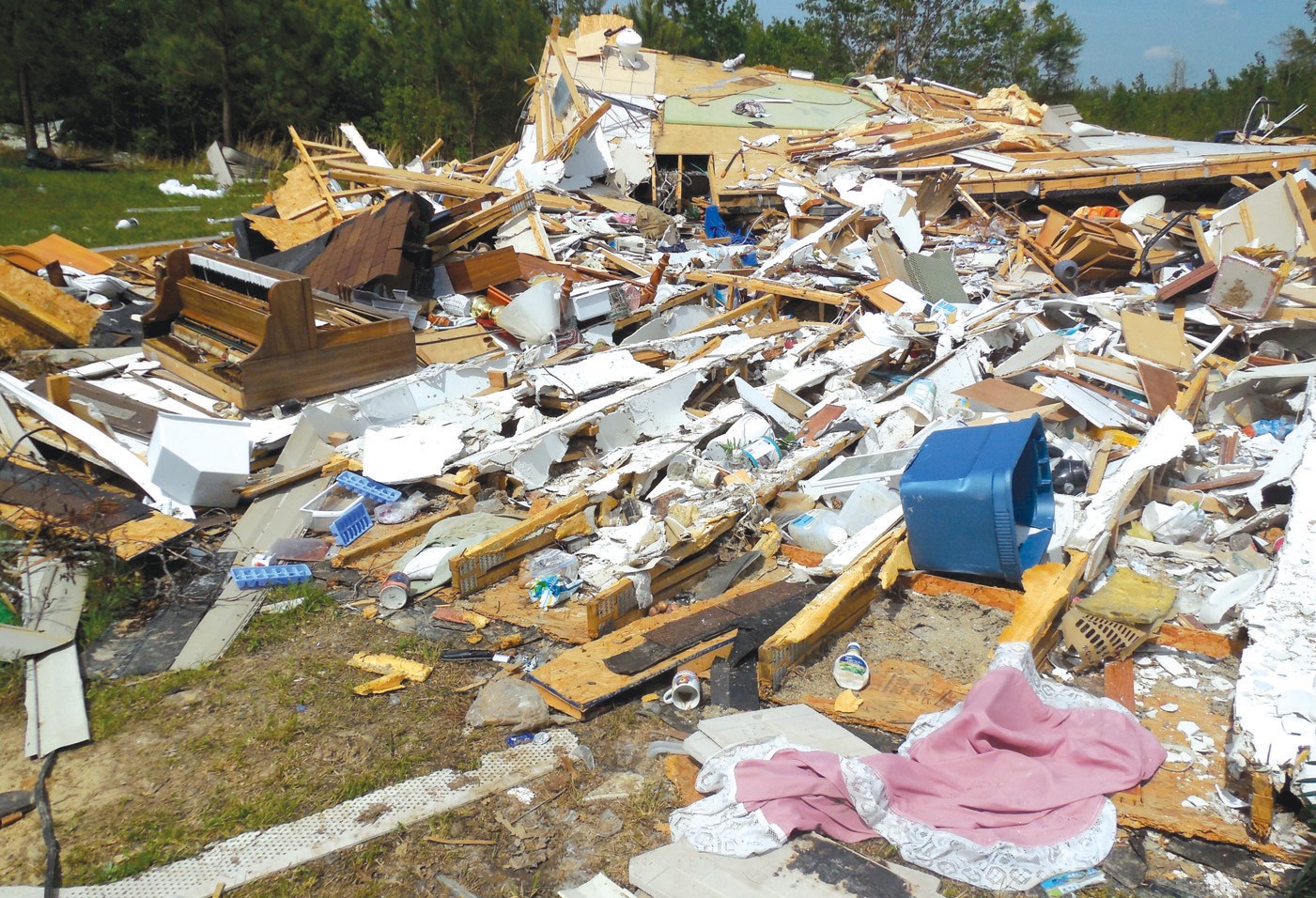 Rick and Linda Johnston were trapped for more than an hour when their trailer was destroyed.

Last month’s tornadoes may be considered old news for some, but for those affected by the storm, it’s still a topic of great importance. Especially for those who lost their home, including Rick and Linda Johnston. Amidst the circumstances, the Johnstons are thankful.

On the 29th, a day after their 41st anniversary, the couple decided to stay in their double-wide trailer on Harmony Lane, off Dumas Bridge Road in the Straight Mountain community.

“I never leave my house during a storm,” says Rick. “I have a peace about it because God knows where I am if He wants to take me.” 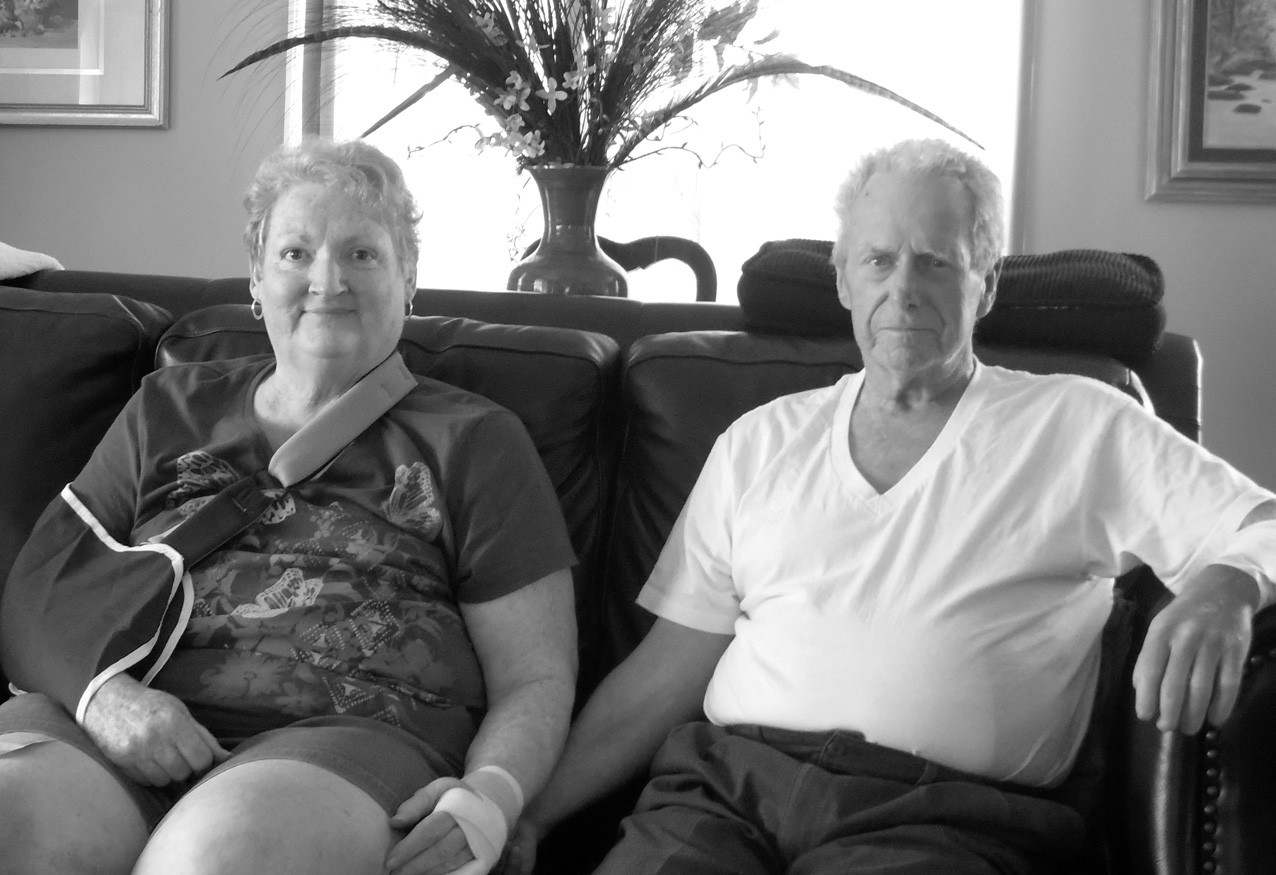 The Johnstons were released from the hospital after a three-day stay.

This peace remained throughout the evening, even after the tornado struck their home of nine-and-ahalf years.

Throughout the night, Rick and Linda had been watching local weather channels, but when the storms seemed to have subsided, the Johnstons went to sleep.

“My youngest brother called me at 12:30 a.m. telling me a storm was headed straight for us, but we really couldn’t do anything,” Rick says. “The power was out so we couldn’t see what the television was saying, so we went back to sleep.”

A dead calm fell over the house right before Linda was awakened by a roaring noise.

“It was over so quickly,” she says. “I never lost consciousness, but thought maybe it was all a dream.”

Rick says he can recall previous storms blowing shingles off the roof, but this time he could hear the entire roof rolling off. The wood began to crack, and the ceiling lifted up.

“I thought maybe the whole bed had lifted, but it was the whole house,” he says.

The Johnston’s trailer had been blown 75 feet from its foundation with Rick and Linda buried underneath the rubble.

Yet, both were at peace.

“God spared my life,” Linda says. “My blood pressure never elevated. I should have been frantic, but not this time. I was giving thanks to God while Rick began singing praises. He would stop every once in a while to say he was freezing because he was partly exposed and the rain was falling on him, but then go right back to singing. While we were waiting for someone to come, we were simply talking, and I was calmly asking God to send someone to help us.”

Across the road, two family members, Wayne and Larry Tidwell, saw the devastation.

“During one of the lightning flashes, Larry saw our home and said, ‘I think their house is gone,’” Linda says.

Merely ten minutes after the storm hit, they, along with Nick Tidwell, were by the Johnstons’ side attempting to remove the rubble and calling for help.

With the help of volunteers, Rick was freed in an hour, and Linda was able to get out an hour later.

Both were in need of medical treatment. Rick had a massive gash on his left arm that would require multiple stitches, but he says he never was in pain. Linda had a fractured shoulder blade, tendon damage in her pinky finger, and a footlong laceration from her knee to her ankle that also required stitches.

Trees blocked the path for ambulances to make it to the Johnstons, and someone, the couple doesn’t know who, transported both of them to the ambulance via a four-wheeler.

From there they were taken to UAB where they remained for three more days. The aftermath

Susan Churchwell, the Johnstons’ daughter, had stayed at her mother-inlaw’s house in Oneonta. As many others did, when the all clear was given after the second tornado warning for Blount County, Churchwell went to sleep.

She received a voice mail from her uncle informing her of her parents’ situation.

“I went instantly numb,” she says. “When he told me they were alive and headed to UAB, I immediately began to make my way there. After what seemed like the longest drive to Birmingham ever, I was about to see them and I had psyched myself up for what they might look like. But when I saw them, they were side by side with their eyes closed. I walked up to mom, she opened her eyes, and said, “Hey baby, I love you, and I’m so glad I’m here to tell you that,’ we both broke down.”

With their home leveled, the Johnstons never worried about where they would go after they were released from the hospital.

Lynette Moore, their good friend from church, has allowed them to stay in her home after leaving the hospital. Additionally, Churchwell’s home was also damaged in the storm and Moore has opened her house to her and her family as well.

“We are so thankful to Lynette for letting us stay here and thankful to Susan for taking such good care of us,” Linda says. “We are just focusing on getting well and going from there but during this time, we have been so blessed by our church, Union Hill Baptist, and we are thankful to the paramedics, the volunteer firefighters, and the UAB Trauma Center for being so good to us.”

On the Sunday after the storm, the Johnstons decided to see the remnants of their home.

“At first I didn’t want to see it, but I needed closure,” Linda says. “I did cry, but those are just material things. You can’t replace your life.”

For now, the couple is taking it one day at a time, but says they feel as though they are miracles.

“We are going to use our testimony to show God can reach out through tragedy and bring good out of a bad situation,” Linda says. “Life is precious, and we shouldn’t take advantage.”

After surviving the storm, Rick says the most important advice he would give to someone is to be be prepared.

“Be prepared spiritually,” he says. “Being physically safe is not as important.”