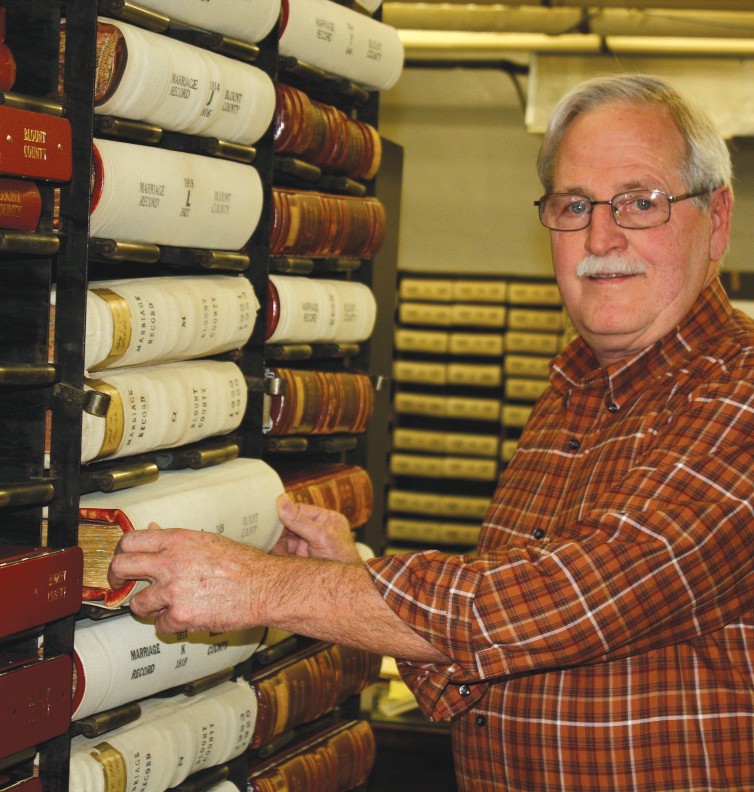 Andy Marsh – records keeper at the archives department located in the basement of the Blount County Courthouse.

A department of the Blount County Courthouse has been compiling this area’s history since 1820. Dates, names, and records reside in walls of bound books, categorized documents, and copious amounts of newspapers. The archives department, located in the basement of the courthouse, is open to anyone who wants to research and delve into this county’s past.

An average of 40 people a day visit the archives, according to records keeper Andy Marsh. Visitors come for a variety of reasons including title work and genealogy research. Information is free, and guests are invited to bring cameras to take pictures. However, copies of the documents must be paid for.

Old copies of The Blount Countian are housed in the department predated to when the name was still The Southern Democrat. No copies are allowed to be made of some material in the department, and any issue published after 1930 are included in that rule. Newspapers preceding 1930 are available on microfilm.

The only documentation missing from the department is a marriage record book that was stolen many years ago and a deed book that had been sent to Washington D.C. to be microfilmed but was lost in a fire that occurred while it was there.

Another section of the archives department contains court cases, which are not available for public access because of concern for organization. Marsh says if someone needs a court case he sends them to the circuit clerk office to gain permission. After permission has been granted, Marsh or a circuit clerk office employee will retrieve the needed documentation from that section of the department. According to Marsh, this allows them to maintain a sense of classification that is important for court case records.

The archives department is open Monday through Friday from 8 a.m. until 5 p.m. For more information, call the Blount County Courthouse at 625-6868.