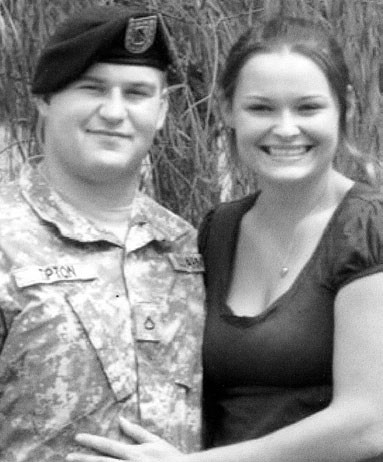 Patricia and Ron Cline of Stinson, Ga., and Ronny and Kathy Finch of Statesboro, Ga., announce the engagement and coming marriage of their daughter, Nikki Finch, of Richmond Hill, Ga., to Kolby Tipton of Fort Stewart, Ga., son of Mike and Karen Tipton of Oneonta.


The bride-elect is the granddaughter of Earlene Nightengale and the late Darrell Nightengale of Ford, Fla., Betty Gibson and the late Ellis Gibson of Claxton, Ga., and the late Julian Finch of Guyton, Ga. She attended Claxton High and graduated from Ogeechee Tech College in 2003.

The prospective groom is the grandson of Jean and Verlon Tipton of Oneonta, Kay Wynn of Oneonta, and Henry A. Richards of Hanceville. A 2006 graduate of Oneonta High School, he is a U.S. Army Cavalry Scout. The couple will be married Aug. 22, 2009, in a ceremony at Tybee Island, Ga.